Has the Greek crisis been a catalyst for social change?

On the occasion of a conversation series on the Greek crisis that concluded this week in Australia, Maria Karra, co-founder of Emfasis Foundation, takes us through the work of the NGO supporting the homeless and shares her thoughts and insights on societal changes witnessed during austerity years 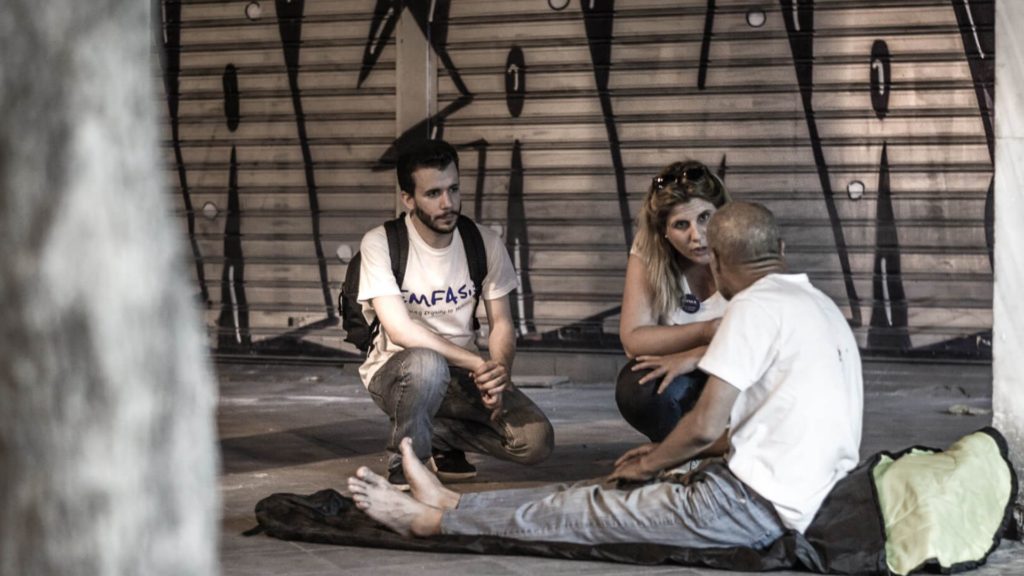 This week, members of the diaspora were briefed on social changes resulting from the economic crisis in Greece and how a new wave of philanthropy can help tackle challenges facing the country today.

Organised by The Hellenic Initiative (THI) Australia, the dinner and conversation series ‘Rising to the challenge – Greece at the Crossroads of Social Change’, was held in Sydney, Melbourne and Perth, with keynote speakers including the heads of two of THI’s charity partners, Desmos Foundation and Emfasis Foundation.

On this occasion, Neos Kosmos asked co-founder of Emfasis Foundation, Maria Karra, to give readers a snapshot of the organisation’s activities and impact so far and share her thoughts and insights on how Greece’s crisis not only scarred its people but also paved the way to a new era.

WHAT IS EMFASIS FOUNDATION?
Emfasis Foundation emerged in 2013 as a response to one of the most harshly felt effects of the crisis, an increase in homelessness.
Operating in Athens and Piraeus, at the core of Emfasis’ activities lies an internationally recognised support methodology, Social Streetwork.

As Maria explains: “We ‘reach out’ to those who do not come to us for help, so that we make the first move to meet them in their environment, on their own terms and conditions.”

This happens through:
– Maintaining a daily presence on the streets of greater Attica providing humanitarian help, counselling and family support with the help of experts (psychologists, sociologists, social workers, etc.) alongside trained volunteers 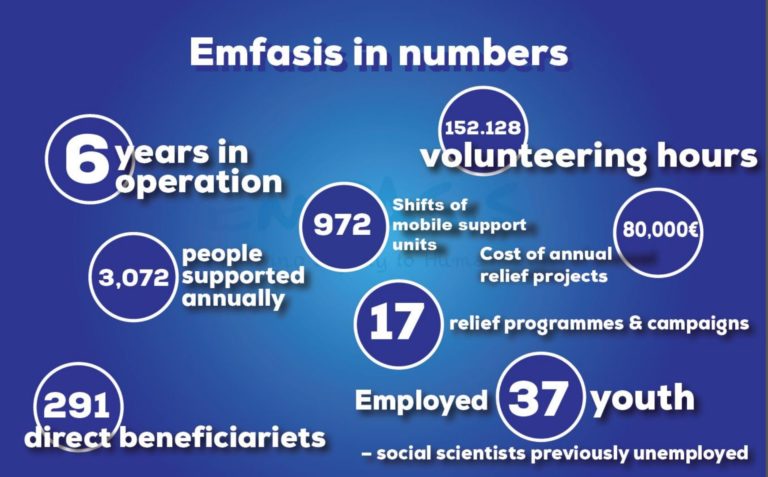 “Our ultimate goal is to strengthen beneficiaries’ abilities to access fundamental standards of living such as housing, work and care, the restoration of their dignity and self-confidence, improving their overall quality of life.”

“We never ever underestimate the impact of the simple act of listening what they have to say with acceptance, compassion and without prejudice.”

CRISIS AS AN OPPORTUNITY
But Emfasis is not the only organisation rising from the ashes of an austerity-stricken welfare state.

According to a University of the Peloponnese evaluation of the NGO sector in Greece, the recent double hit experienced by the country, as a result of the debt and the refugee crisis – has “stimulated the enhancement of the sector through the strengthening of existing organisations as well as the creation of numerous new ones,” Maria cites.

The tally is currently sitting at over 700 active organisations.

Yet, there is another notable change recorded.

“Organisations like Emfasis initially focusing on relief and distribution of goods, witnessed the highest participation of the civic society percentage wise,” says Maria attributing the development to an increase in community eagerness to help the most vulnerable.

“The shift has undoubtedly happened. Sometimes in erratic spurs, without structure or real focus, nevertheless the shocking chills of watching own friends, colleagues and neighbours experiencing poverty, unemployment and inability to pay for anything beyond basic healthcare triggered our sense of solidarity.”

WALKING THE TALK
Even though Greece is no longer in the headlines, its people including younger generations are still experiencing the effects of the crisis.

“We sense the frustration of the young tech-savvy and entrepreneurial volunteer. They are desperately seeking for an inviting entrepreneurial work environment to breed their ideas, in the hope for a better Greece.

“Since the birth of Emfasis, I have been interacting with tens maybe hundreds of our younger Greeks. They seem to be receiving conflicting messages. On the one hand, the family wants them to get a ‘safe’ job, because ‘there is crisis’.”

On the other side, Maria goes on to explain, a series of ‘walls’ obstruct their way: insufficient post-university career mentoring, youth employment programs as quick fixes, scarcity of positions related to their studies and the list goes on. To reverse the situation, Maria suggests focus should be placed on “job opportunities strictly based on merit of effort, ethics, character traits, values”, as well as social education and adequate mentoring. At Emfasis, she says, they walk the talk.

“We made a point to hire young previously unemployed social scientists, who were never given the chance to work on their field before.”
Sponsored volunteer empowerment programmes are also within their portfolio.

While cautious, Maria appears optimistic towards future prospects for the Greek youth, provided a shift away from individual agendas prevails.

“There is certainly no more space for error, the country and its people must rid of unhelpful and divisive populism influences and work collectively on a realistic fanfare-free plan for a solid future. It will take time, but it can be done.”

The (extra)ordinary story of Giorgos: Maria Karra shares the inspirational account of an Emfasis beneficiary who transitioned from a state of struggle to regaining agency over his life

Three years ago, I met Giorgos, a 43-year-old, who had ended on the streets only one or two nights before we spotted him. Initially he tried to deny that he was sleeping rough.

Giving him the right to share only what he wished, I didn’t try to push him to reveal more.

I asked him if he wouldn’t mind accepting to keep some “survival” items for the night, in case someone else would need them, since we were about to go. He took a sleeping bag, an overnight hygiene bag, a small torch and some other basic items, such as socks and underwear.

This went on for a few days. In the end it was obvious, that the items were for him. We developed a relationship of trust and respect. He had lost his job at the printer’s warehouse, was separating from his wife and couldn’t live in her house anymore, his 21-year-old son had just left to work as a bus driver in Europe.

His guilt of having failed the role of the breadwinner, was filling him with anger and frustration.

Out of sheer coincidence, at that time Emfasis needed printing all of its information leaflets, several other forms and documents for the social services. We decided with the team to ask Giorgos if he would like to take over the job and help us with the design and the paper quality. He was over the moon.

In the coming days, he would wake up and go in search of a printing facility that would allow him to make a business deal. A week after, he had arranged everything. He did an amazing job with the printing and from that moment on, without shame, he got in touch with his old clients, trying to get some of their business too.

Giorgos couldn’t afford his own place, but a month later moved to a basement of an old friend, able to pay for his own utilities and maintenance. Few days after, a huge box was left outside the Emfasis offices. Inside there were thousands of business cards for each of the streetworkers who helped him out.