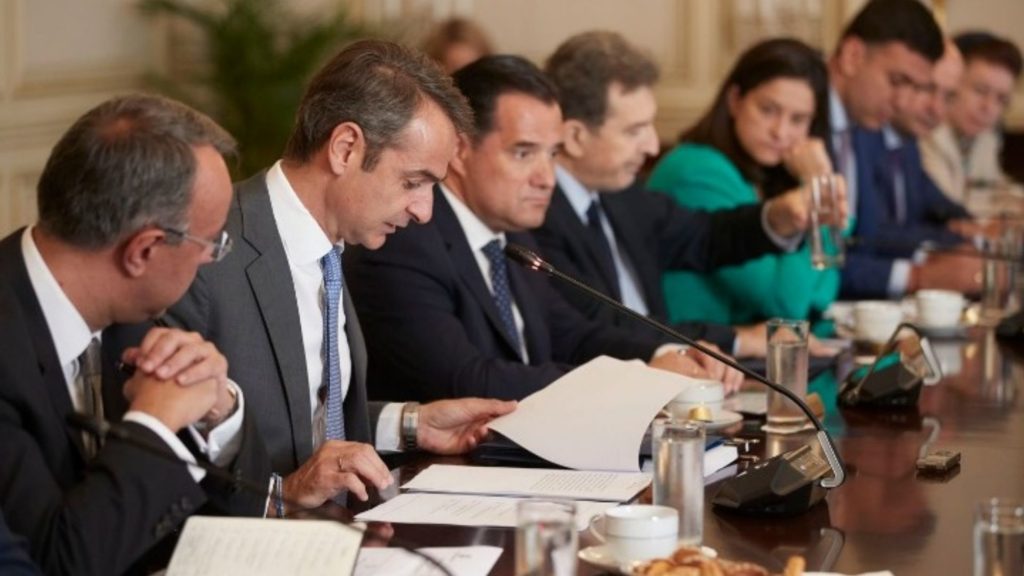 Greek cabinet met to discuss the problems caused by the increased migrant and refugee influx.

Greek Prime Minister Kyriakos Mitsotakis chaired a four-hour interministerial meeting on Monday to examine the increased migratory influx of refugees and asylum seekers on Greek shores following the riots and fires at the Morias camp, located on the island of Lesvos, that lead to the death of a woman and a child.

A catalogue of measures were announced to deal with the migration flows, including the movement of 10,000 people by the end of next year and the relocation of thousands from the overcrowded island camps to mainland Greece.

After the meeting, Greek Government Spokesman Stelios Petsas said that the latest developments in migratory and refugee flows were extensively discussed, as was the draft law on toughening the criteria for both applying and approving asylum status applications.

An analysis of nationality statistics of those entering the country has reportedly given rise to an understanding that migration is at the root of the problem, not refugees.

Troubleshooting the issue, therefore, requires a combination of the following measures, as per the meeting’s conclusions, according to a report by the Athens Macedonia News Agency regarding the results of the meeting:

* Strengthening of border security, specifically by increasing sea patrols at maritime borders. An additional 23 patrols are currently being carried out daily in the eastern Aegean islands.

* Construction of predeportation centers for those who have entered the country illegally and are not entitled to asylum status or whose application has been rejected.

* Compiling a ‘safe countries’ list so that those who have entered Greece illegally can be immediately returned to these countries.

* Continuing the decongestion of eastern Aegean islands by transporting refugees to mainland facilities.

Mr Mitsotakis had highlighted the issue at the 74th UN General Assembly in New York, and four actions will soon be taken:

a. Initiative on the migration route in the eastern Mediterranean, with a relevant document to be presented jointly by Bulgaria, Cyprus and Greece to the European Union Justice and Home Affairs Council on 7-8 October.

b. Visit by Deputy Minister of Citizen Protection Giorgos Koumoutsakos to Turkey on 2-3 October for talks on the issue with his Turkish counterpart.

c. Talks during the visit of the French and German interior ministers to Turkey and Greece within the current week.

d. Greek initiative to raise the issue at the European Council on 17-18 October.

Citizen Protection Minister Michalis Chrysochoidis introduced the bill to both speed up and toughen asylum application procedures, with the following main objectives:

* Update the Greek asylum system to deal with increased migratory flows and with the fact that the Balkan so-called ‘corridor’ to Europe remains closed.

* Eliminate the consequences of legislation which has led to an undetermined number of foreign nationals who remain unidentified by the authorities and therefore cannot be returned to their home countries.

Moreover, the basic principles of the bill are:

* To show full respect for the rights of asylum seekers, as provided for in EU law.

* To require applicants to cooperate with national authorities.

* To only allow applicants who have an approved refugee profile in the asylum system, and only keep those who comply with their obligations.

* Rapid removal of asylum seekers from the system if they employ delay tactics during the application process.

The purpose of the above interventions is to complete relevant procedures within three months.

Apart from the extensive consideration of refugee-related issues, the meeting looked into draft laws of the Ministries of Health and Justice.

Health Minister Vassilis Kikilias presented a bill soon to be submitted to parliament for approval, which includes the universal application of anti-smoking law in all public places, the modernization of the Hellenic National Public Health Organization (former KEELPNO) and the Ambulance Service (EKAV).

Minister for Justice Kostas Tsiaras presented the proposals for changes to the penal codes, as well as proposals for the post of president of the Court of Auditors and five vice-presidents of the Supreme Court, the establishment of two inter-ministerial committees on strategic investments for energy and climate respectively, and the approval of two legislative acts.