After a highly entertaining game that ended in a 2-2 draw, the team from Piraeus are now alone on top of the ladder 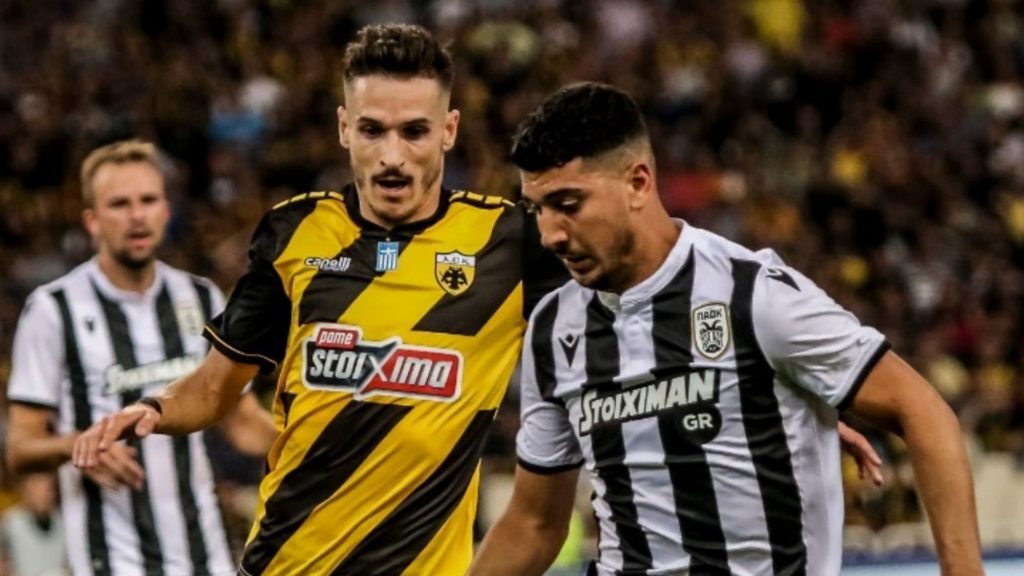 AEK and PAOK worked in favour of Olympiacos. Photo: APE/MPE

It was the most anticipated game from round five of Greek Super League One, and justifiably so.

AEK and PAOK, the two-headed eagles of Greece, bumped heads on Sunday in a game that had almost everything. Goals, suspense, turnarounds, climactic battles… the one thing missing from this game was a winner, as the 2-2 result left both teams (and perhaps the visitors even more so) feeling like they could’ve claimed all three points.

The champions walked in to the game looking like the better team and dominated the black-and-yellows, with wave after wave of good chances.

Dimitris Pelkas was a constant source of threat for the AEK defence, as he seemed capable to make the most of the long balls coming in from the back.

During one of those chances on the 16th minute, the Greek international found Karol Swiderski inside the area and the Polish forward tapped the ball behind Barkas to open the score.

AEK manager Nikos Kostenoglou decided to help his team and ordered a change in formation, with the home side finding more chances up front.

Despite PAOK creating several opportunities, they weren’t able to capitalise on any of them, as the first half ended with the champions having a slender lead.

In the second half, things were drastically different as the home side decided to push forward in numbers and create more opportunities.

On the 54th minute, Marco Livaja took the free kick from outside the area, striking the ball low onto oncoming Dmitri Chygrynskiy, who nodded it into the back of the net, giving AEK a much-needed equaliser. But the visitors continued to look for goals up front and took advantage of the home side’s gaps in defence and just four minutes later, they struck again with the same two players that created the first goal.

READ MORE: Giannis Antetokounmpo is not yet “done” with the national team of Greece

Limnios came in from the left side and served the ball to Swiderski, who took a clever back step to put oncoming Nenad Krsticic out of contention and score his second in the contest. Kostenoglou’s men didn’t give up though and continued to look for the equaliser. And although their first strike by Petros Mantalos was (rightfully) cancelled out by the VAR, they found what they were looking for by an unlikely hero.

On the 79th minute, Milos Deletic took advantage of a clever pass by Mantalos to equalise yet again for AEK and shape the final 2-2 result.

Despite PAOK wasting a series of opportunities near the end of the game, not much else changed, with the final whistle leaving both teams feeling like they could’ve done more and fans satisfied by the spectacle.

But the highest level of satisfaction was felt at Pireaus, with this result giving Olympiacos a small advantage at the top of league.

The red-and-whites had a comfortable afternoon against Lamia, beating them 2-0 thanks to a great performance by substitutes Youssef El Arabi, Hillal Soudani and Leonardo Koutris.

Now they turn their attention to Tuesday’s game against Crvena Zvezda for day two of the Champions League.

Meanwhile, Panathinaikos managed to seal their first three points in the league after beating Panionios at Nea Smyrni 0-1 with a goal by Ghayas Zahid.

But the shock of round five came from Thessaloniki, where Aris lost 2-3 to Larissa in yet another nail bitter.

The yellows will host Olympiacos next weekend, in what promises to be the most thrilling encounter from round six of the Super League.