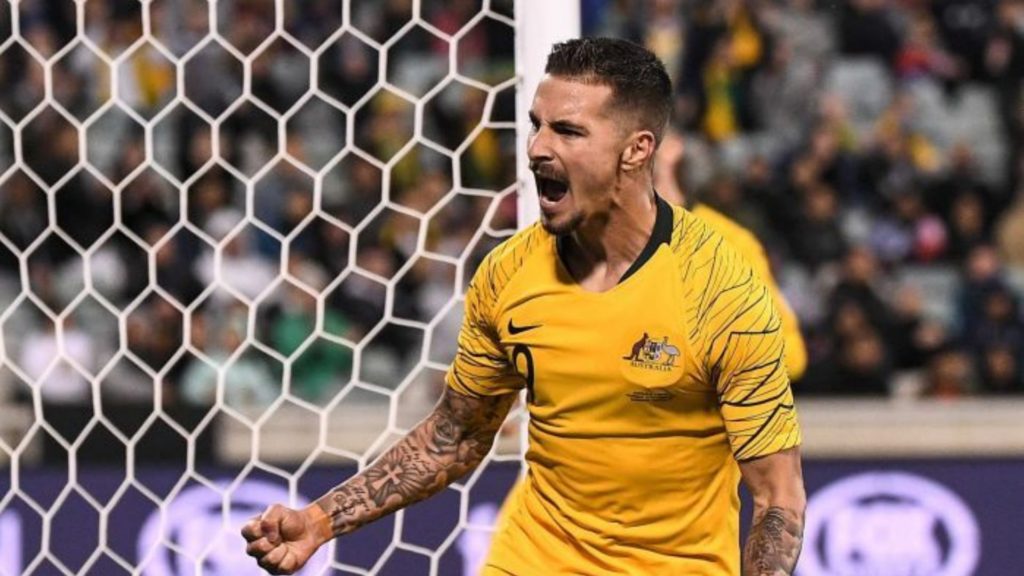 The Socceroos went top of their group in the World Cup qualifiers by defeating Nepal 5-0 in Canberra on Thursday evening in a second round group B match in front of a crowd of just over 18,500.

The sizeable winning margin failed to reflect the extent of Australia’s dominance against the lowly ranked Nepalese team. The stats better reflected that dominance with Australia producing 36 shots to Nepal’s one solitary shot on goal. Australia also had 76 percent possession to Nepal’s 24 per cent.

Socceroos boss Graham Arnold chose the in-form Jamie MacLaren as the central striker and the Melbourne City forward repaid the coach’s faith by spearheading the Socceroos to victory with a hat trick, striking early with a brace inside the opening 20 minutes.

Debutante centre back, Harry Soutter, who at six foot and a half, stood head and shoulders above nearly every other player on the park, particularly the Nepalese, celebrated a goal on debut inside the 25th minute, by nodding in a Craig Goodwin corner. Matthew Leckie thought he had scored the Socceroos’ fourth on the stroke of half time, but his goal was controversially ruled offside.

But a fourth Socceroos goal seemed inevitable and it came in the 54th minute again via the head of Soutter which was deflected by Nepalese defender Dinesh Rabanshi past his keeper and into the net.

As the Nepalese dropped deeper in defence in a bid to contain the Socceroos, Apostolos Giannou was introduced into the game as a second half sub for Aaron Mooy, changing the formation to 4-4-2. However Giannou found chances few and far between in a congested penalty area. Ajden Hrustic and Awer Mabil also came off the bench and were both lively before a late Mark Milligan pass was chested by Jackson Irvine into the path of MacLaren who, without breaking stride, took a touch before lashing his left foot shot into the net to complete his hat trick in the 90th minute.

After the game, coach Arnold commented, “We worked hard on the last camp with our attacking patterns and the two sessions we had here was all about attack. It’s coming together, we’re creating those chances which is great, it’s a big improvement and now it’s all about the final touch which is the finish,” he said.

“It’s about creating chances and then being ruthless and finishing them off.

“But it’s not easy against 10 players behind the ball and you have to give credit to Nepal who kept working hard all night.”

Nepal coach Johan Kalin commented post match, “I think they wanted to score more goals, of course, after that start. So to hold them the way we did in the second half there is no shame in that,” Kalin said.

“In the first half we had a nightmare start conceding after five minutes and we had problems on crosses and set pieces with their very tall defender.

“It was a tough team we were playing against, a quality team.”

Dimi Petratos was an unused sub, but he along with Adam Taggart will be hoping to get some game time next Tuesday when Australia plays its next World Cup qualifier away to Chinese Taipei.