New coach Michael Oenning made an impact to the Thessaloniki team, helping them earn three crucial points, with the Enosi gaining an important psychological boost ahead of the derby with Olympiacos 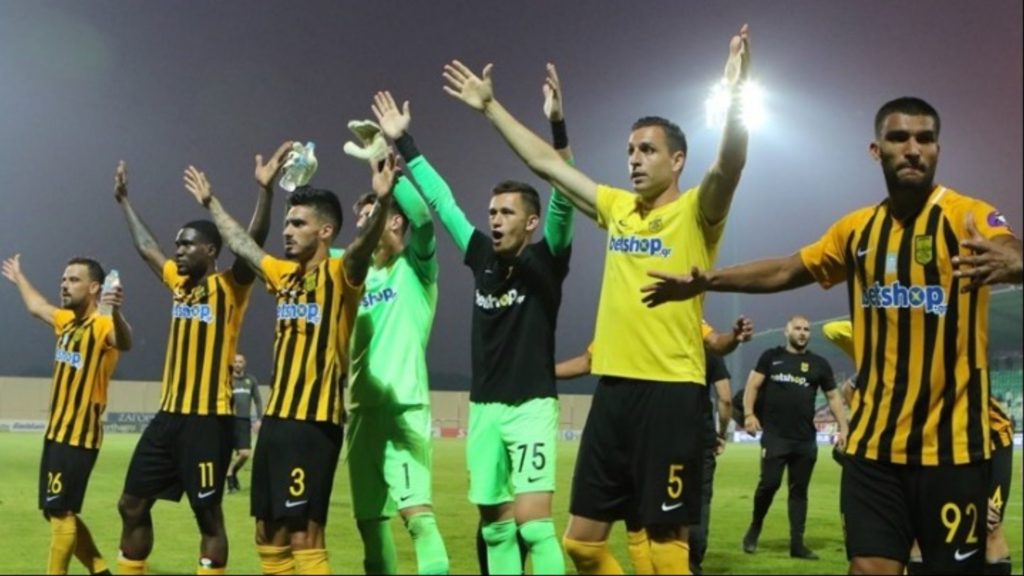 Aris seem to be back on course after their win in Xanthi. Photo: APE/MPE

There might not have been a highlight game from the Super League’s Round Seven schedule on record, yet despite this most games had their own appeal for fans.

In Xanthi, the up-until-then second placed home side welcomed Aris, with its new manager Michael Oenning on the bench.

The difference to Aris’ squad was immediately evident, as the yellows managed to close the gaps in their defence and appeared more solid as a team.

They were also fortunate enough to score a goal from early on, as after just three minutes Brown Ideye was brought down in the box by goalkeeper Carlos Abad, with Bruno Gama taking the spot kick and sending the ball into the back of the net.

That was to be the final score of the encounter, as the visitors were able to hold on despite the many attempts by Kiko Ramirez’s men to find the equaliser, forcing Xanthi to their first home loss in the season.

At the Olympic Stadium, AEK got through the Volos hurdle unscathed (3-2 win) and now look towards the derby with Olympiacos.

The black-and-yellows were dominant throughout the encounter, creating many opportunities to score and playing impressive football at times.

Yet despite this, they fell behind by a goal from Joaquin Torres but managed to bounce back almost immediately with the usual suspect, Marko Livaja.

Volos were left with ten men just seconds before the end of the first half yet they were able to hold on through the onslaught for the greater part of the second half.

But their luck gave out on the 75th minute when the highly active Nelson Oliveira won the penalty kick which was converted by skipper Petros Mantalos.

The captain struck again just three minutes later, securing the win for the home side, while Volos was able to lower the margin of their defeat on the 83rd with Dimopoulos.

At Karaiskakis, OFI showed no fear against table leaders Olympiacos, with the two teams offering the spectators a great game and the home side barely escaping with a 2-1 win.

The home side took the lead through a powerful Halil Soudani header, with the Cretans equalising on the dying breaths of the first 45 minutes with a wonderful shot by Abil Nabi from outside the box.

The winning goal came again from Soudani, who brought the ball down in the box and blasted it inside the net, keeping his team in the leading position.

PAOK have now moved to second, after their impressive 3-0 win against Lamia. Goals were scored by Misic, Limnios and Swiderski, with the final score being formed just after 10 minutes.

At Peristeri, Panathinaikos were able to claim a very important win against Atromitos with 0-1. Anastasios Chatzigiovannis provided the winning goal for the visitors.