Greece in the 1950s and 60s was a magnet for young seekers and artists in a world that was finally recovering from the ravages of war and was shrugging off the fears generated by the rise of the Iron Curtain. Greece then was on the edge of the free world. It represented a bridge to an ancient, inspiring past and was yet to join the tide of modernity and consumerism.

The winners of this year’s Prime Minister’s Literary Awards non-fiction category, Paul Genoni and Tanya Dalziell, capture the essence of this period with their book Half the Perfect World: Writers, Dreamers and Drifters, 1955-64. The book, published by Monash University Publishing, tells the story of the expatriate community that settled on Hydra. Leonard Cohen was among the artists and writers drawn to the island as was Australian literary couple Charmian Clift and George Johnston.

In their research for the book, Genoni and Dalziell drew on previously unseen letters, manuscripts and diaries and they have further enlivened the book with the photographs from LIFE magazine photojournalist James Burke.

The book records how the promise of a creative life drew these people to the island and how the pressures of personal ambition and wider social changes in the world generated the breakdown of this special community.

In reaching their decision the chair of the awards’ panel, Professor Lynette Russell, said that “although Half the Perfect World documents the lives of two prominent post-war Australian literary exiles, it is also a book that addresses contemporary Australia, and our propensity for looking both outward and inward.”

The full announcement of the awards was made by the Department of Communications and Arts. 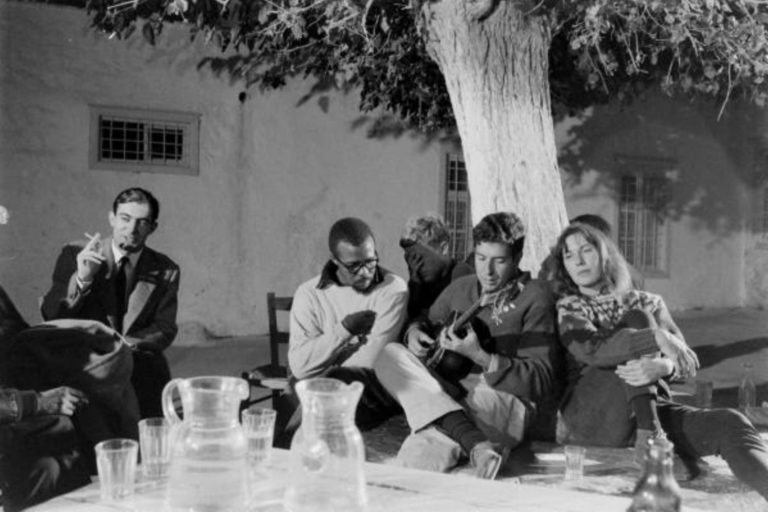 The book tells of the life of expats in Hydra.The story of George Johnston and Charmian Clift who settled in Hydra “in a bid to escape the cloying conservatism of 1950s Australia” runs parallel with that of the other writers and artists.

“Together these personal histories build a compelling and absorbing narrative of the tensions between creative ambition and domestic life. The authors document the complicated relations between the Australians and fellow artist exiles and the constant sense of alienation from Australia,'” said Prof Russell.

“Half the Perfect World illuminates aspects of Australia’s continuing relationship with Europe, reminding us that a little over half a century ago many Australians still looked to Europe for intellectual sustenance and culture.

“The elegant writing recreates the time and place which shaped the strangely domestic, yet hedonistic lifestyle of Johnston, Clift and their social circle. The photographs are no mere embellishment but are analytical tools which offer a fresh take on their times and lives,” said Prof Russell.

Mr Genoni works with the School of Media, Culture and Creative Arts at Curtin University in Perth. He is co-editor with Ms Dalziell of Telling Stories: Australian Life and Literature 1935-2012 (2013). Ms Dalziell works in English and Cultural Studies at the University of Western Australia. She is the author of Settler Romances and the Australian Girl (2004). She co-edited Cultural Seeds: Essays of the Work of Nick Cave (2009).