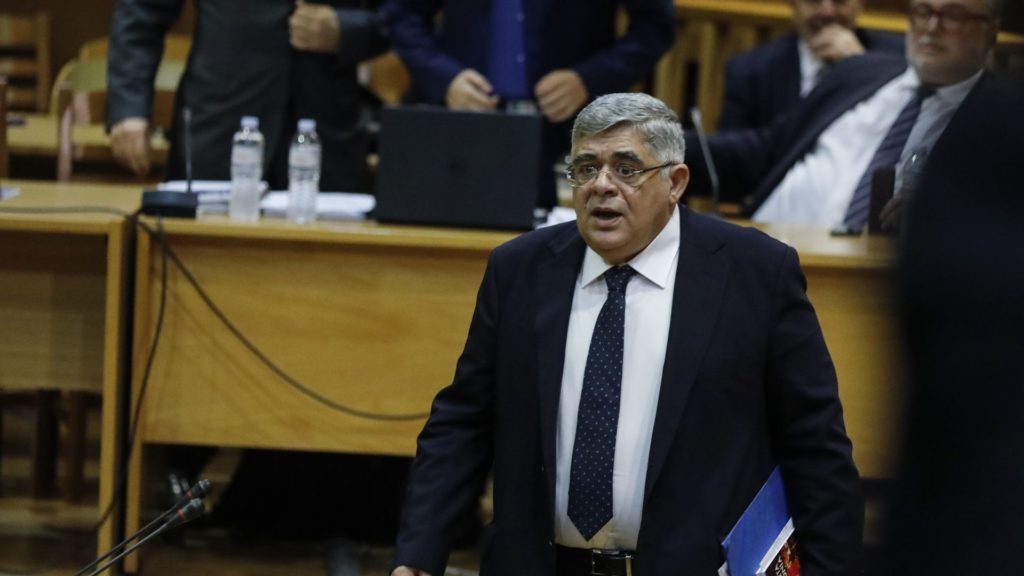 Golden Dawn leader Nikos Michaloliakos accused of leading a criminal organisation, arrives to testify in the Court of Athens as part of the long-running trial over the party’s activities. Photo: Photo: AAP via AP, Petros Giannakouris

The testimony of far-right Golden Dawn leader Nikos Michaloliakos began in the Criminal Appeals Court on Wednesday, with Michaloliakos pleading ‘not guilty’ to the charges against him and claiming he was the victim of a political plot. He is the last of 69 defendants, including 18 former lawmakers to take the stand in the marathon trial that began in April 2015.

As he entered the packed courtroom, some 70 Golden Dawn supporters stood to attention while the other side of the courtroom, filled with friends and relatives of murdered rapper Pavlos Fyssas, erupted into jeers and denunciations. Many of them greeted Mr Michaloliakos with pieces of paper on which they had written only the number six – to signify the number of years since Fyssas was murdered by a Golden Dawn supporter. It was the 2013 killing of the Greek rapper which sparked the trial.

Addressing the court, Mr Michaloliakos said that there had been intervention in the course of justice and claimed that this was the first time in the history of the Greek state that “a political leader is on the stand for the acts of a party supporter”.

Mr Michaloliakos has been charged with leading what is essentially a criminal organisation rather than a political party, in addition to a host of other indictments connected to acts of murder and assault committed by members of Golden Dawn. The Appeals Court justices presiding will be called on to make a decision of historic importance and judge whether Golden Dawn is a legitimate political party or a Nazi-type criminal group operating under the guise of a political party.

The judicial investigation into the party’s activities was launched after the murder of Pavlos Fyssas by Giorgos Roupakias on 18 September 2013 in Keratsini, during an attack also involving other Golden Dawn supporters. An investigation of the incident showed that members of the party coordinated their actions on that evening, instructing Roupakias to go to the location where Fyssas and his friends could be found.

In addition to the Fyssas murder, the trial is also expected to look into the party’s role in the murder of a Pakistani worker, attacks on Communist Party of Greece (KKE) members in Perama, attacks on Egyptian fishermen, attacks on centres in Ilioupolis, on Crete and in other areas. The prosecution’s proposal stresses the Nazi-type structure of the party, Mihaloliakos’ leading role and the fact that its action peaked after 2012 when GD entered Parliament.