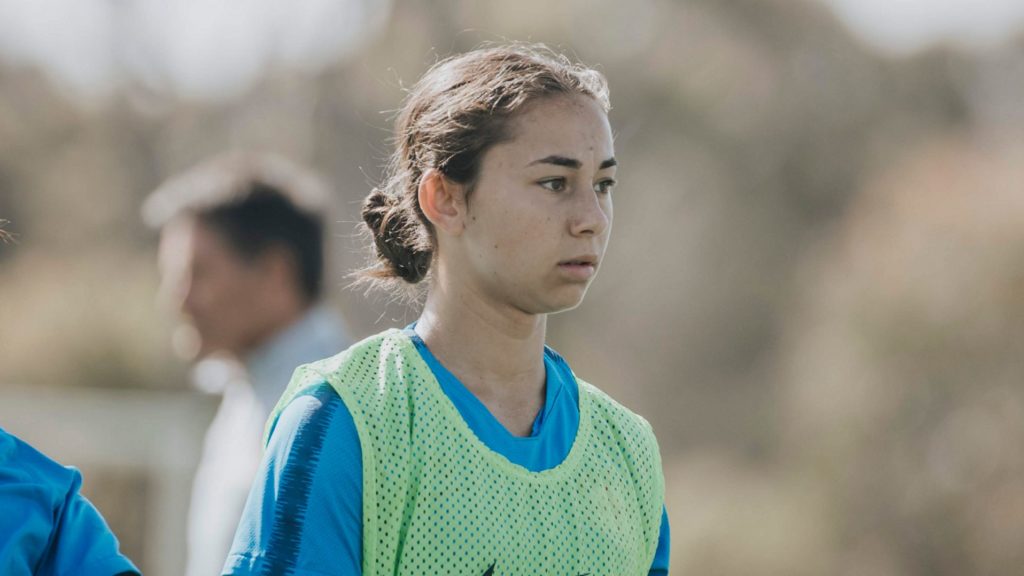 Nia Stamatopoulos is excited to be part of City team that aims to challenge for Silverware. Photo: Melbourne City.com

Fresh from representing the Junior Matildas at the AFC U 16’s Women’s Championship tournament in Thailand recently, young Melbourne-based midfielder Nia Stamatopoulos is preparing for her second season of the W-League as part of the Melbourne City squad where her team mates include six Matildas and fellow Greek Australian footballer Sofia Sakalis.

Stamatopoulos and Sakalis are amongst a handful of Greek-Australian footballers who will be part of W-League squads this coming season, including Angelique Hristodoulou and Teresa Polias at Sydney FC and Pana Petratos at Newcastle Jets.

Speaking to Neos Kosmos on the eve of the 12th W-League season, Stamatopoulos says she is excited to be back training with the Melbourne City squad following her first season, in which she became the club’s youngest ever W-League debutante. The squad includes six Matildas players, rivalled in number only by Brisbane Roar’s squad.

The year 10 student says, “I love it personally, having the older more experienced players there. They’re just so professional. It just shows on and off the pitch. At training how they push themselves! The difference between normal NPL training to this is a massive step up.”

After winning three successive W-League grand finals in their first three seasons since joining in 2015, the team fell back to earth last season finishing in 5th place. Stamatopoulos says that after the disappointment of last season, the teams wants to “come back and finish first in the premiership”.

On a personal note, she’s hoping to get a bit more game time or at least make the most of the minutes she gets. “Because I feel like I can offer a lot more this season as well,” Stamatopoulos says. “To keep on improving, taking as much as I can out of the Matildas and the international professionals. Just learning from it and making the most of this opportunity.”

The recent AFC tournament in Thailand brought her term with the Junior Matildas to a close. She looks back at her time with the Junior Matildas as an integral part of her football and personal development. Playing in tournaments with the Matildas took her to far-flung Kyrzygstan, Thailand and the Pacific Islands. “That’s also been a massive theme as well, just to see what it’s like in other countries. Just to know what it’s like (experiencing) different food, different cultures, weather. That’s definitely helped. You’re taking lessons from that. What to do, when to do it.”

Her next goal at national team level is to earn selection and become part of the Young Matildas. Currently studying at Maribynong Secondary College and contemplating tertiary studies in either Sports Science or Sports Journalism, Stamatopoulos will be part of the new Football Victoria Emerging Matildas Program in 2020, once the W-League season ends. According to the Football Victoria website, the new program “will allow Victorian-based players to undertake training in a high-performance environment without the need to relocate interstate or overseas.  Players will have access to coaching and support staff with prior experience of Australian National Senior and Youth Team programs across Men and Women.”