Rudd was a WWII veteran, dedicated POW advocate and survivor of the Nino Bixio tragedy In 2017 two bronze plaques were created and unveiled in front of Bill Rudd at Oakleigh’s Vanilla restaurant. Photo: Supplied

Many Australians – and many in the Australian Hellenic community – were saddened to learn of the passing of Bill Rudd OAM. Bill was just short of his 102nd birthday when he passed away peacefully at his Prahran home in the early hours of the 29 October 2019.

I had the pleasure of meeting Bill a number of years ago. Always a gentleman, Bill was generous with his time and gave great encouragement to the commemorative works of many of those he met, including myself. I know that historians Ian Frazer and Peter Monteath in particular will mourn his passing.

I spent many hours with Bill, fascinated by both his enthusiasm and untiring work for veteran’s families. But I was particularly engaged by his own personal story, of his life, his service in the Second World War, his time as a prisoner of war and his escape and his post-war experience as a worker in the re-construction of Europe.

Bill was born in the Melbourne suburb of Essendon, part of the famous Edward William Cole family that had brought enjoyment to thousands of Melburnians with both his Bourke Street Book Arcade and his Funny Picture Book. One of the most fascinating stories that Bill recounted to me was his pre-war tour of Europe – and specifically Nazi Germany – which was abruptly ended by the impending coming of the war. He made his way back to Australia via Latin America and across the Pacific Ocean.

Having seen the reality of the rise of Nazism and the coming of the war, young Bill joined the 2nd AIF after completing his studies at the University of Melbourne. A Sapper or field engineer in the 2/7th Field Company of the Royal Australian Engineers, Bill saw service in the Middle East. Attached to the 2/28th Australian Infantry Battalion, Bill took part in the great battle of El Alamein and it was here that he was captured by the Germans during the Allied attack on “Ruin Ridge” in July 1942. Bill was one of 400 men of the Battalion captured that day.

Handed over to the Italians, Bill and some 2,000 Allied prisoners boarded the Nino Bixio in August 1942, sailing from Libya to an internment camp in Italy. Bill found a spot on the steel mezzanine deck that ran around the forward hold of the ship and remembers it as “incredibly hot and stuffy.” In waters south west of Pylos on 17 August 1942, the Nino Bixio was torpedoed by an Allied submarine. Only days before this same submarine had been taking on and dropping off Allied SOE agents and Greek resistance fighters on Crete and the mainland. Bill remembers “a sudden tremendous thud and the “whoompf” of the torpedo bursting into the hold.” As he made his way to the deck with the rest of the survivors, Bill witnessed more destruction and dead bodies. Over 300 of Bill’s comrades were killed in the ensuing tragedy – Australians, New Zealanders and other Allied troops. 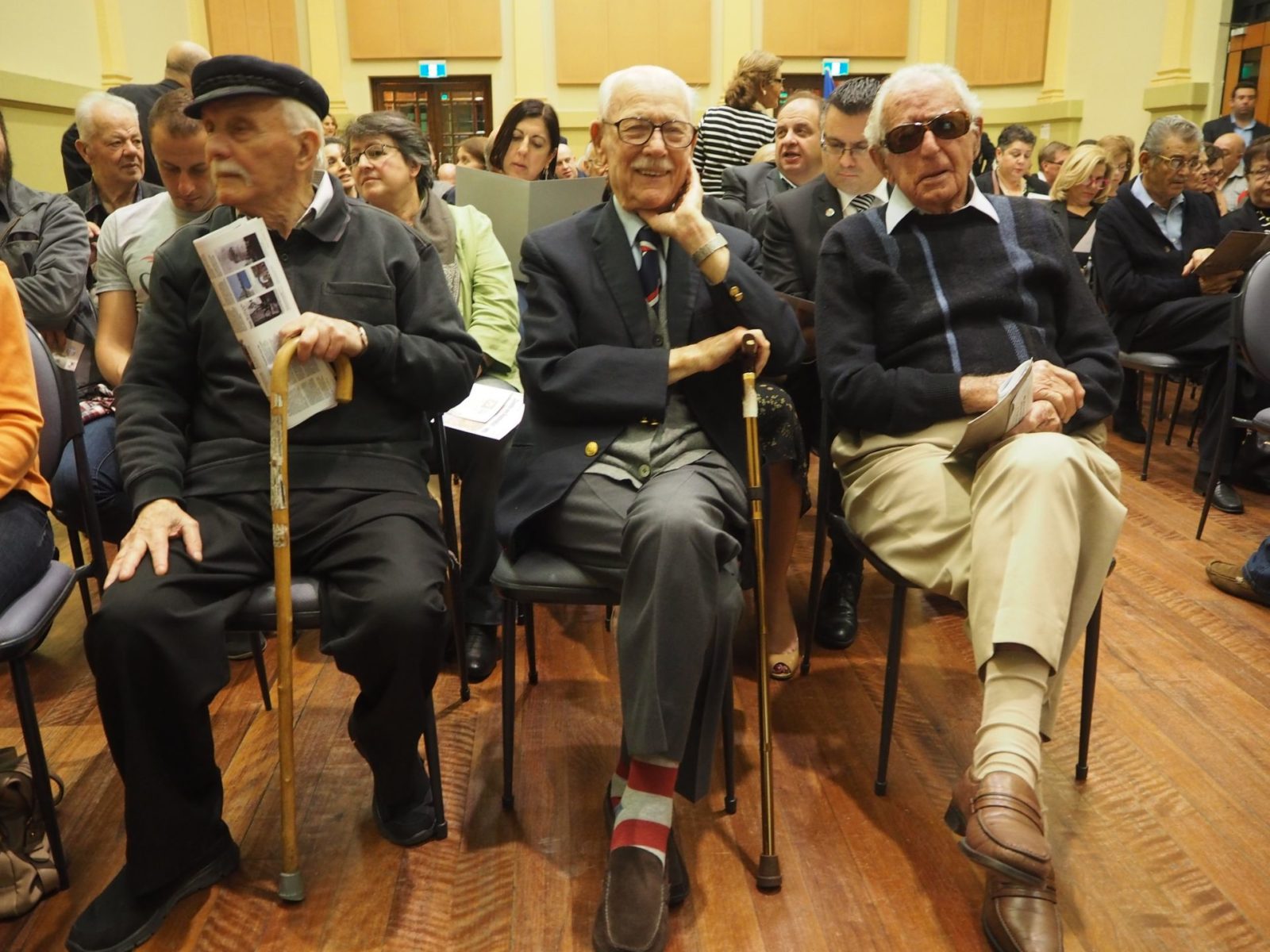 Yet the ship did not sink and was eventually towed into Pylos harbour by an Italian warship. Here Bill came ashore with the other survivors, helping to bring ashore the dead and wounded. The dead were buried in the local Greek Orthodox Cemetery, re-buried after the war at Phaleron Cemetery near Athens. The sole Australian amongst the dead re-buried at Phaleron was Sydney-born Sergeant Robert Patterson of the 2/32nd Battalion. Those missing would be commemorated at the El Alamein Memorial in Egypt.

A similar story of death and survival had occurred earlier in the war with the Sebastiano Veniero-Jason off Cape Methone on 9 December 1941, where over 500 were killed out of a total 2,100 Allied prisoners aboard the ship. Locals at Methone also assisted in the collection and temporary burial of the bodies of Allied soldiers washed ashore.

Coming ashore at Pylos, Bill remembered being imprisoned in a large warehouse in the town. He never forgot the generosity of the local Greek townspeople who gave him and the other prisoners food when their Italian guards were out of sight. For the rest of his life, Bill would never forget this act of kindness and bravery by the people of Pylos.

Bill and the other prisoners were soon transported up the coast of Greece, eventually making their way to an Italian-run POW camp in northern Italy, Camp 57 at Gruppignano, and later to Camp 106 at Vercelli. It was from here, following the Italian surrender that he made his escape. Having learnt some Italian Bill was able to make his way north, guided by friendly locals.

One of the most amusing stories that Bill told me was his experience as he approached the Italian-Swiss border. From his cover amongst some trees, Bill was depressed to see a border guard wearing what he believed was the traditional German Army steel helmet. Unarmed, Bill resolved there was only one thing for it – he would rush the guard and take his chances. As he approached the guard, the guard turned and called on him to halt. Raising his arms in the sign of surrender and called out that he was an Allied soldier, Bill felt despondent at his impending re-incarceration. To his astonishment, the guard rushed to him and embraced him. The guard was Swiss, his uniform bearing an uncanny similarity to that of Germany. Bill told me he was not ashamed to admit that he embraced and kissed the guard enthusiastically. He was now free. 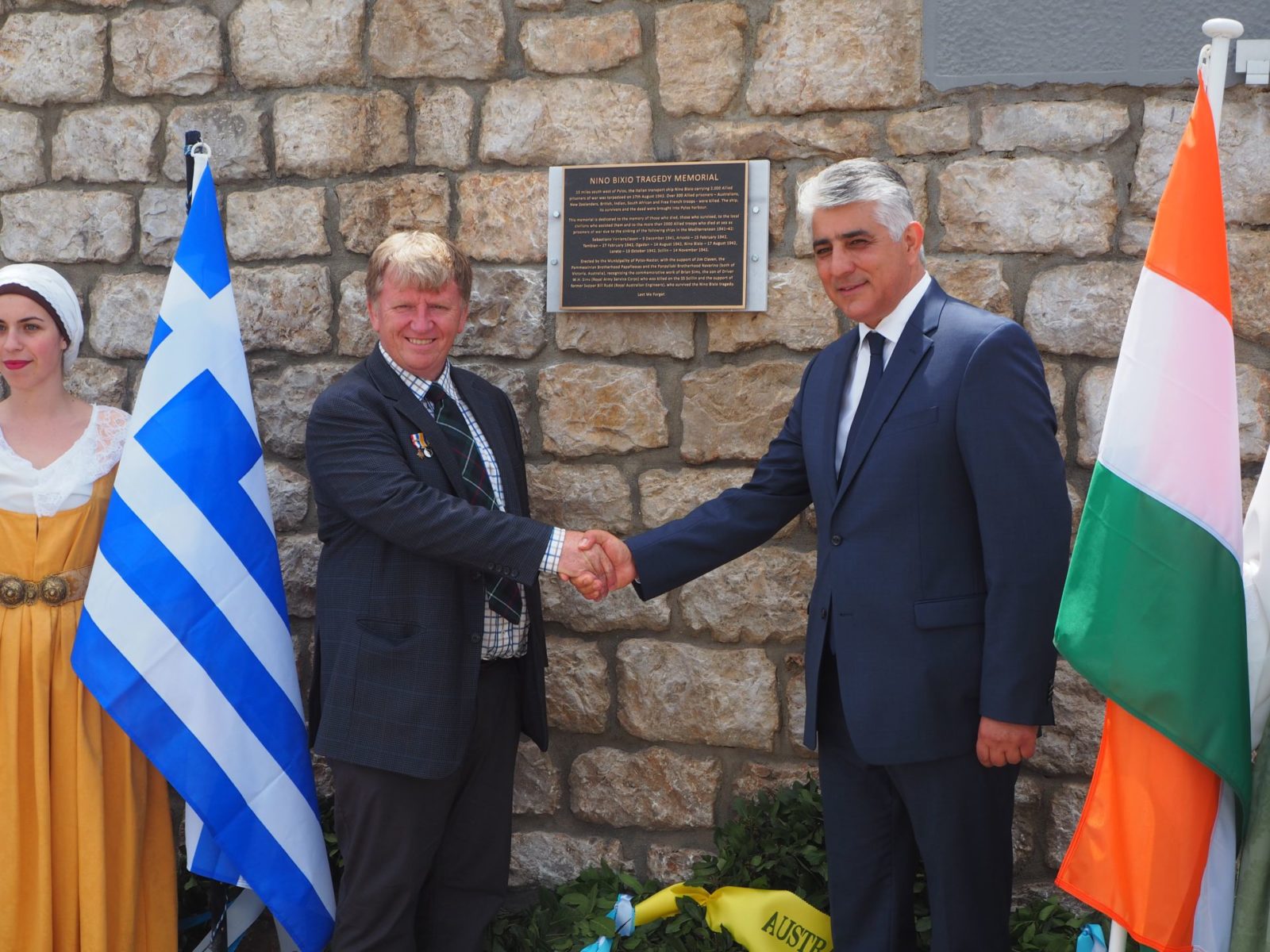 During the war in Switzerland, Bill would work for the British Consulate in Geneva and meet his future wife, Ms Caty Oosthoek, a Dutch refugee. They were married in Geneva on the 14th February 1945. After the war had finally ended, Bill worked in Europe with the United Nations Relief and Rehabilitation Administration, primarily in the Netherlands, before returning to Australia. It was during his work in the Netherlands that Bill learned that two of his wife’s relatives had been killed during the war for their resistance work.

After his return to Australia, Bill worked for many years to document the history of the Allied service personnel on the run in Europe – the free-men – creating and maintaining a website that is an invaluable resource to veterans, descendents and researchers and now will be maintained by the Australian War Memorial. He played a key role in the creation of the Australian POW memorial in Ballarat and was a regular honoured guest at its annual commemorations.

One of the things that Bill impressed upon me from the beginning of our friendship was his desire to see the POW ship tragedies of Pylos and Methone commemorated and recognition given to the help the survivors received from the Greek locals. In so doing, Bill urged me to continue the work of Brian Simms, a friend and fellow researcher of Bill’s who was also the son of an Allied soldier killed on the Sebastiano Venier.

It was my great pleasure to work with Melbourne’s Panpyliaki Brotherhood Navarino and Pammessinian Brotherhood Papaflessas to realise Bill’s dream last year. In 2017 two bronze plaques were created and unveiled in front of Bill at Oakleigh’s Vanilla restaurant. Bill and the crowd cheered and celebrated with a glass of ouzo! What could have been more appropriate? During the project it was my pleasure to introduce Bill to another Anzac veteran of the Middle East Gil Easton as well as Mr Nick Georgopoulos, who as a young boy had witnessed the tragedy at Methone.

Last year the plaques were unveiled in places of honour – at Pylos and at Methone – by the Muncipality of Pylos-Nestor with much ceremony, which was a supporter of the project from the time it was raised with them. Over 100 people assembled before the Greek War Memorial at Pylos Harbour to take part in the unveiling service. These included Ms Lousi Kalfagian, representing the Australian Ambassador to Greece, Mr Dimitiris Kantafaris, the Mayor of Pylos-Nestor and Ms Eleni Aleiferi, Vice-Regional Governor for the Messinian Region of the Peloponnese. Credit is due to the local authorities who conducted a full commemorative service, with military and religious representatives and locals in traditional dress taking part. It was my honour to address the crowd on behalf of the Memorial Organising Committee and take part in the unveiling of the plaque. This was followed by a similar moving service at Methone. Unable to travel, Bill’s presence was made to all by the playing of his personal video message, created with the help of Melbourne’s Paul Sougleris. As the last survivor of these tragedies, I know I can speak for all involved that it was an honour to have been able to work to complete them in Bill’s lifetime.

Bill will be sadly missed not only by me but by the thousands of others whose lives he touched. Vale Bill Rudd.