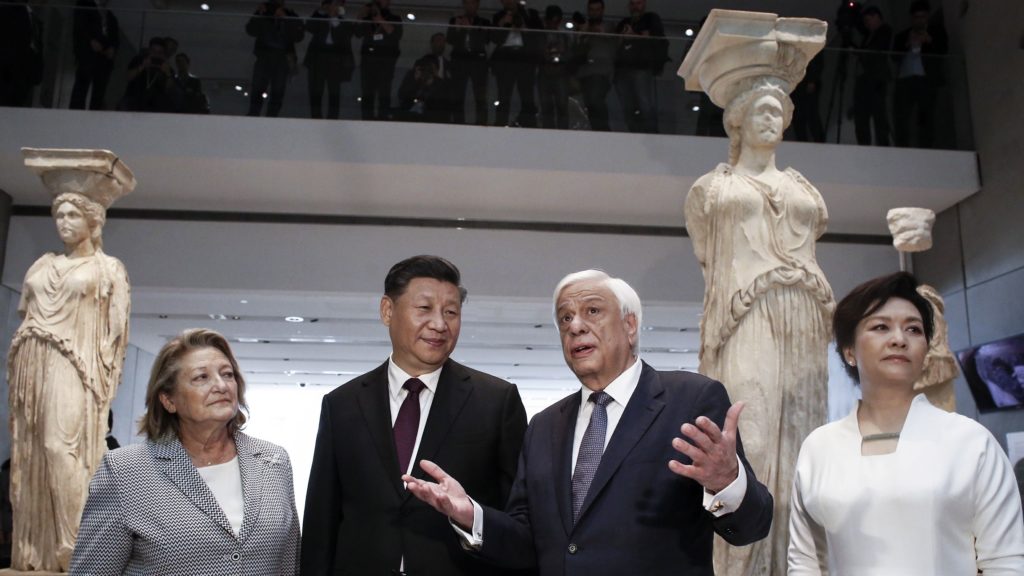 Chinese President Xi Jinping wrapped his two-day visit to Greece with an expression of solidarity with Greek efforts bring back the Parthenon Marbles.

The issue of the statues and friezes, stripped from the Acropolis in the 19th Century and housed in the British Museum, was raised by Greek President Prokopis Pavlopoulos as he escorted MrXi through the Acropolis Museum on Tuesday.

“The Marbles’ place is here and not in the British Museum,” Mr Pavlopoulos said to Mr Xi. “They are keeping them there illegally. We ask for your support.”

Speaking before the press, Mr Xi said in a statement: “Not only do I agree with the return of the Parthenon sculptures but you will also have our support as we too have our own (artefacts) of Chinese culture outside the country and are trying to get them home.

The Chinese premier and his wife, Peng Liyuan, were welcomed to the museum by Mr Pavlopoulos and his wife Vlassia Pavlopoulos-Peltsemi, museum president Dimitris Paternalis and Greek Culture Minister Lina Mendoni.

Mr Pavlopoulos had just returned from a state visit to Shanghai when the Chinese premier accompanied a high-level delegation landed in Athens last Sunday.

On Monday, Greek Prime Minister Kyriakos Mitsotakis and Mr Xi visited Piraeus which is operated by  the Chinese state-owned company COSCO (China Ocean Shipping (Group) Company. A total of 16 new investment and trade agreements were signed between the two countries.

The agreements will provide more opportunities for China to invest in Greece. There are also plans for Pireaus to become an outlet for Chinese goods coming through its “Belt and Road” routes through Central Asia to the Mediterranean. If all goes to plan, Pireaus could become the biggest port in the Mediterranean to rival Rotterdam and Antwerp.

Greece was the first European country on Mr Xi’s visit to Europe ahead of the annual summit in Brussels between the European Union and China on Wednesday.