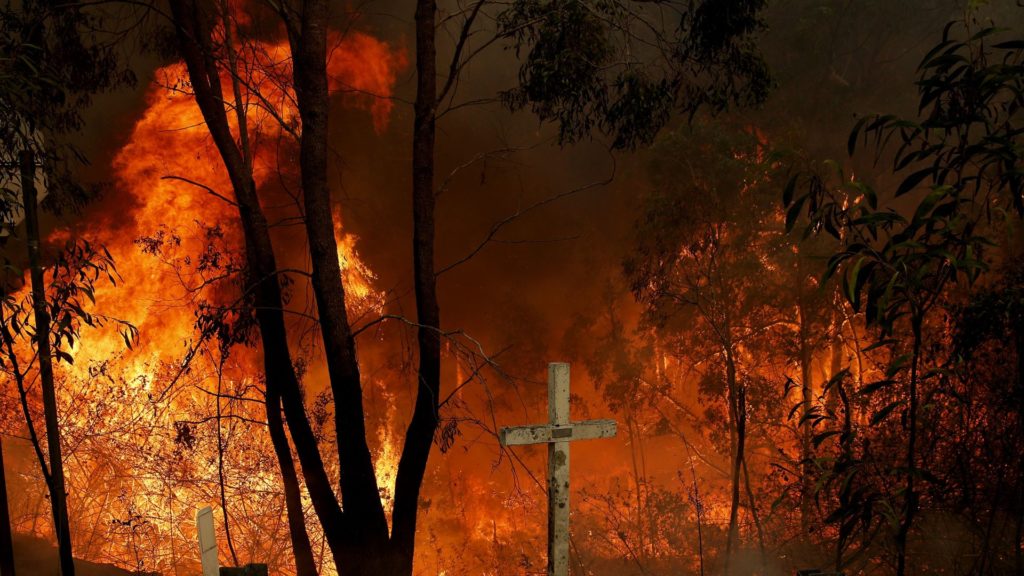 The Hillville bushfire burns out of control behind a memorial cross on the Pacific Highway at Possum brush south of Taree in the Mid North Coast region of NSW on Tuesday, 12 November. Photo: AAP/Darren Pateman

The devastation in New South Wales and Queensland continues, as firefighters continue to battle blazes on Friday, with conditions expected to worsen as the weather heats up.

Four people have lost their lives in the horrific fires, among them Greek-born George Nole, 85, and Chris Savva, 63, who is reportedly of Cypriot background.

Mr Nole’s body was found in a car at the Kangawalla fire ground, located near Glen Innes in northern NSW.

He had moved to Australia in the 1980’s, where he initially faced racism, branded a “wog”, and so went on to change his last name to hide his heritage.

Mr Savva, a long-term resident of South Arm, NSW, died in his SUV after his exit route was blocked by a burnt-out bridge, and his car was found rolled down an embankment.

A coroner is examining the cause of death, according to the Sydney Morning Herald.

He has been remembered by neighbour Petra Campbell as “pretty shy” but “part of a very tight-knit rural community”.

Neos Kosmos extends its heartfelt condolences to the families and friends of the victims, and all those who have been impacted by the fires.