Memories of my childhood in Nigeria 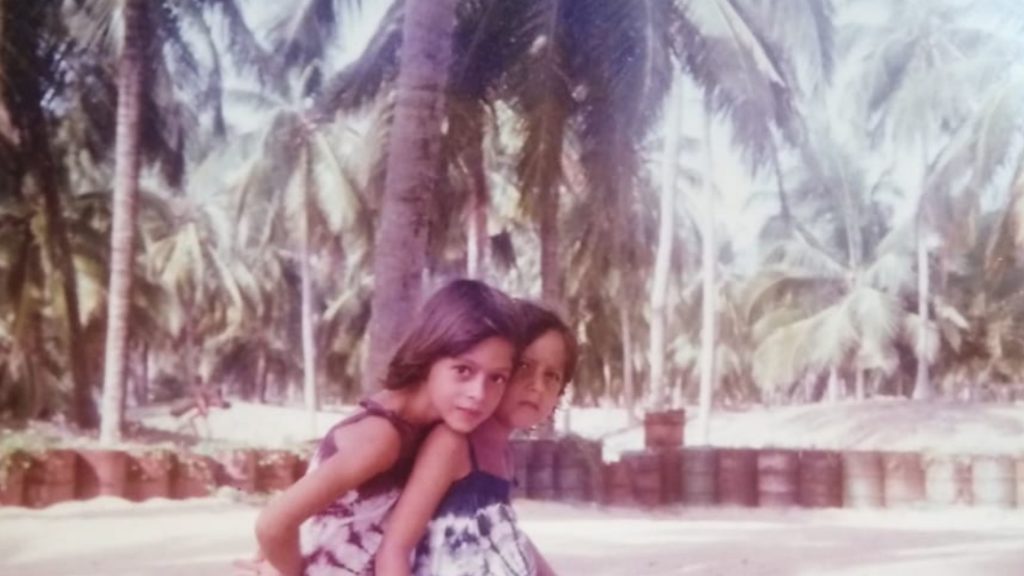 My sister and I at Badagry Beach.

Nothing is subtle in the tropical landscape of Nigeria. The powerful elements of the vast ocean, the rivers and lagoons, the thick forests of palm trees, the heavy rains lashing down on the red soil, the desert dust and scorching sun, are all reflected in the people of this diverse and beautiful land. It rings in their laughter; it brightens in their colourful attire of patterns and symbols, their imaginative hair dress, beautiful jewellery and powerful art.

In a country like this the magic is still strong. Though the people may have acquired in multitudes the western religions, their tribal beliefs and the spirits of their ancestors are just an echo away, intensifying the contradictions, the complexity and depth of what we might call the “heart” of the people.

If someone were to ask me what I remember most of my childhood in Nigeria, my first memories would be the scent of mangoes ripening in Aba, the unique taste of garri (a traditional dish prepared with powdered yam), the dragon flies, the chaos in the streets of Lagos, but especially the ocean. The endless beach where towering waves would roll and crash on the shore, drenching us, before retreating back into the sea.

I was born in a small missionary hospital in Abeokuta in 1974. The doctor who delivered me was a German nun, who was later honoured by the locals with the title of “Chief” for successfully assisting with so many deliveries. During my birth my mother remembers the cries and havoc caused by the escape of a patient from the psychiatric clinic next door.
My Greek father and Hungarian mother were neighbours in Lagos where they met.

My first language was pidgin English, an English-based language which was the main dialect spoken in a country with more than 250 tribes and 500 different languages.

Innocent years perhaps, as we lived sheltered from the outside world, somewhat oblivious to the political and social circumstances of the Nigerian people.

In one of my first memories, I recall cycling with my sister through the neighbourhood, stopping to chat to the locals in the evenings, as they lit fires outside their homes to prepare their evening meal. They were kind and good-hearted, especially to children. This is where I first tried garri with pepper soup, a taste which even today awakens in me a sweet nostalgia for those carefree years.

When I started primary school, my family moved to the compound owned by the company my father worked for, so we could be closer to the Greek school. The school had only two classrooms and an Orthodox church in its premises. We were eight students when we started out but by the time we reached sixth grade there were only two of us left. We played with the same kids in school and at home, growing up as a family, in each other’s houses, in the huge garden, celebrating every occasion together. I remember our parents’ unforgettable parties, how we laughed as we watched them dance, peeking through the crack of a door.

READ: When did I become ‘white’? Innocent years perhaps, as we lived sheltered from the outside world, somewhat oblivious to the political and social circumstances of the Nigerian people. Our destinations were specific and organised: to the school, to neighbouring homes, to the beach. The locals had not yet fully recovered from the atrocities of the Biafran War, which a few years later was followed by a coup and the establishment of a military government. This is when the check-points became part of our daily life. Armed soldiers would stop us regularly. Our boot was always full of fruit, soap, rice which usually helped us pass smoothly through these checks.

I remember one incident that haunted me for many years. One day, on the way to school we stopped in front of a mob of angry people carrying tyres to trap a thief that was caught red-handed. If the police did not arrive in time, the people took justice in their own hands and would set him on fire. The situation was frantic and terrifying, as if the people were determined to make this one man pay for all their suffering.

On rare occasions we heard of incidents of robbery in the houses of friends. However this was not the norm. The people of Nigeria were not, in general, violent.

Every Sunday we would go to the beach. It was the only day when the roads were free of traffic. Families on their way to church would flood the streets dressed up in their colourful traditional clothes.

We used to go to Badagry, where we would meet our friends in a large breezy beach house. The tables would flood with all kinds of delicious food. The grown-ups would play volleyball or cards, as we chased after crabs, jumped into large sand hills or built huts out of palm leaves. Drifting salesmen would pass by, carrying treasures, jewellery, traditional fabrics, handmade baskets, and imaginative wooden artefacts. Occasionally, when we were lucky, a snake charmer would appear, and pull a cobra out of his basket. We would watch mesmerised, as the snake tensed and stretched to the sound of the flute.

The beach disappeared into the horizon. There was no beginning and no end. If the waves were low, the village fishermen would go out to sea in their wooden canoes and come back loaded with fish. 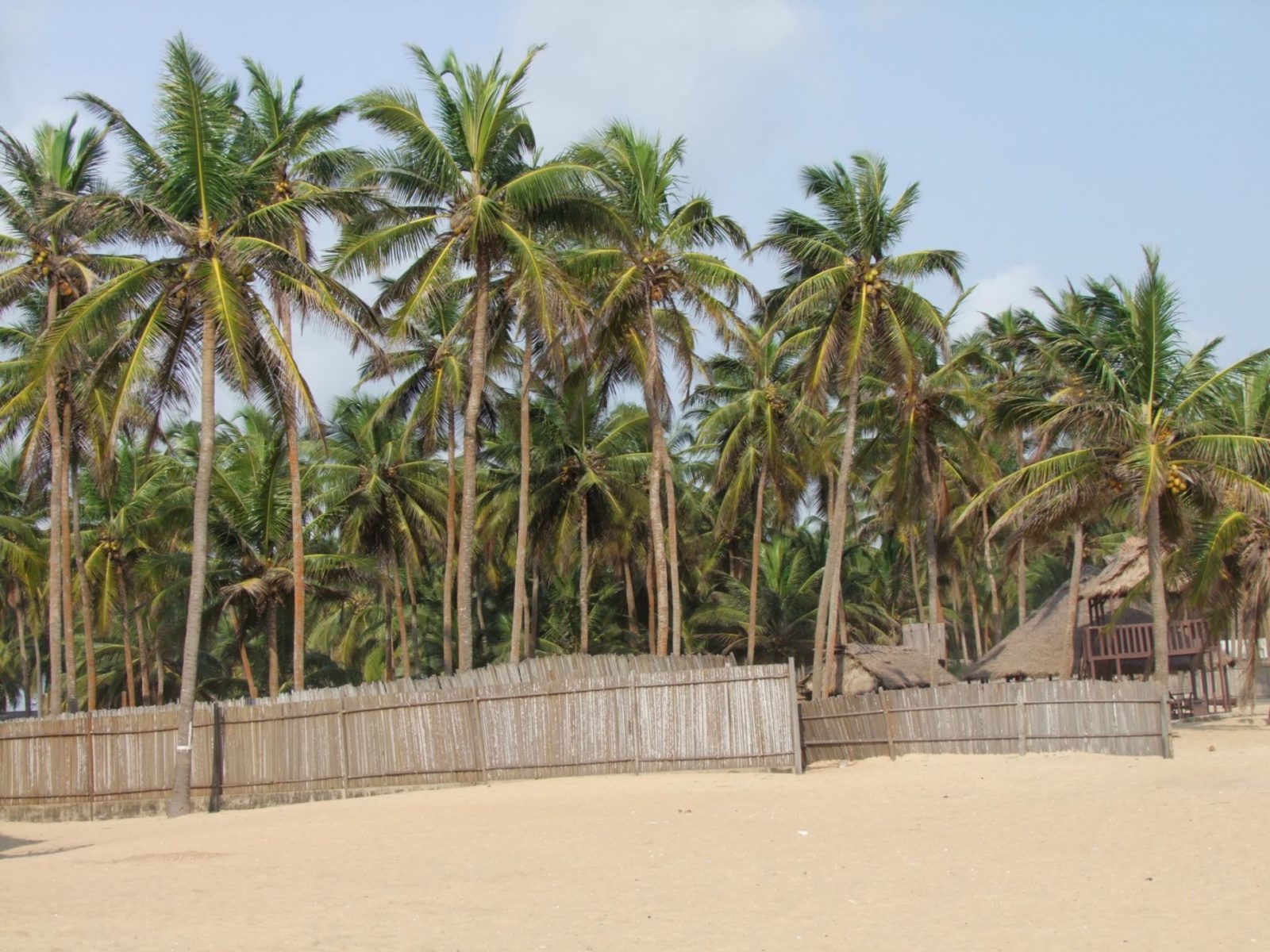 Today I know that Badagry was one of the main ports from where the slaves were transported from Nigeria. In this beautiful country every corner still recounts the injustices and the tragedies that this nation has suffered. Ben Okri says characteristically in one of his books: “Perhaps our biggest weakness as a nation is that we are so resilient”.

Even though mostly poor, living with challenges and third-world conditions, the people of Nigeria were by nature optimistic and full of faith. I remember them in the markets, carrying their overflowing baskets on their heads, mothers with their babies wrapped around their waist, bargaining and laughing, quick-witted, spirited and smart.

We left Nigeria when I was 12, but my connection with the country did not end then. During the following decades I visited Lagos sporadically. Growing up I read extensively the great Nigerian authors. Born story-tellers such as Chinua Achebe, Ben Okri, Wole Soyinka, and more recently Helen Oyeyemi, Chimamanda Ngozi Adichie, continue to unravel new aspects of the country and its rich culture and history, and through their depictions, I relive images and situations of my childhood.

Presently, as I’m walking the streets of Melbourne, I brighten up when I happen to see my fellow country men, easily recognisable by their graceful confident step, their tall and lean bearing and their brilliant smile.

READ NEXT: Baby without a name grows into a man on a quest to find family