Do you want to know where pensioner poverty is the most prevalent? Pensioners around the world were assessed. Photo: Unsplash

A recent OECD report, titled Pensions at a Glance 2015, showed that 13.5 per cent of people aged 65 and over are living in relative income poverty.

The term ‘relative income poverty’ is defined as income beneath half the national median equivalised household income.

Across the board, women are defined as those at greater risk of poverty than men, and the older old – defined as those aged 75 and over – more likely to fall on hard times than the younger old that are aged from 66-75 years of age.

In Australia, public pension spending is 3.5 per cent of the GDP (half the OECD average which is at 7.9 per cent). The average life expectancy is at 82 years. The minimum pension age is 65 years, with the pension age increasing every two months from 2017 until it reaches 67 in 2023. In March 2014, the maximum single rate of pension was $843 per fortnight. Pensions are means tested.

Among the countries most at risk are South Korea where almost 45 per cent of retirees are living in poverty, according to the report. Australia and the United States have high levels of poverty among pensioners with 23.2 and 23.1 per cent respectively.

Among the most developed pension systems is that of the Netherlands where only 3.1 per cent of pensioners are struggling financially.

Here is the way pensions look in a chart by Statista: 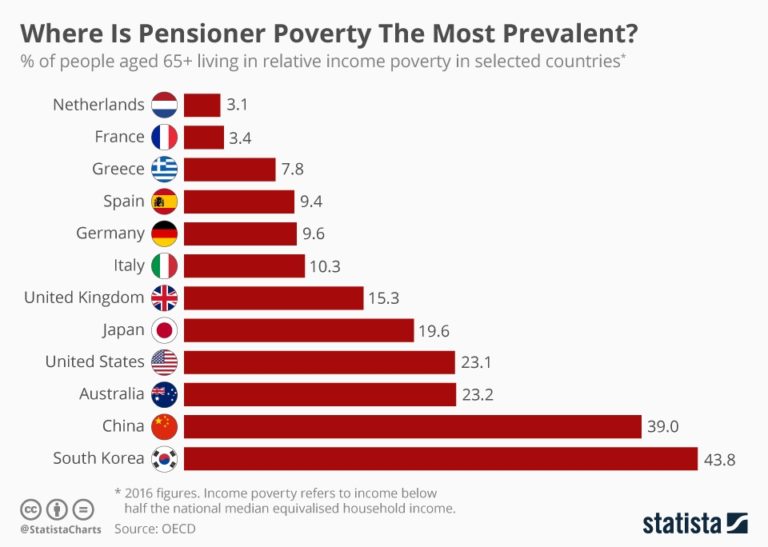