Travels to Greece: The magic of the Pelion Peninsula In so many ways travelling to Greece can make you step back into another time long ago. For me it has always been about connecting the significant historical places to the mythology that the Ancient Greeks are so famous for. And that is how my husband and I found the magical Pelion Peninsula, in Thessaly, Central Greece.

According to Greek mythology, the Pelion was the place where the gods of Olympus took their summer holidays. And it was also the land of the centaurs, the most famous of which, Chiron, trained heroes like Hercules, Jason, and Achilles.

We had always returned to Greece for holidays that were not just about sitting on a beach, and we had notched up a few in our eight trips together, but our journeys also entailed getting a “sense” of what the places meant to our ancestors long ago.

On one of our trips a few years ago we had the luxury of taking time off work for a whole three months. It heralded an exploration of the islands of Milos, Santorini and Crete and then later to the Pelion peninsula. We learnt what the meltemi was when the north wind blew strong and unrelenting for the whole week we were on Milos. And, we discovered how unpredictable “island hopping” can be when our ferry from Milos to Santorini was cancelled minutes before departure leaving scores of angry passengers shaking their heads in disbelief.  Fortunately, our domatio host, unperturbed and unsurprising, came back to pick us up and kindly put us back in our old room saying maybe the ferry will leave tomorrow.

And now back to the Pelion.

After a short stint visiting the all-embracing Athenian relatives, it was time to move on for a little autumn escape from the Athens zougla. Our dog-eared guide book mentioned the mythology of the Pelion region and we thought how could we not have a memorable experience there!  So off we went.

READ MORE: Getting acquainted with the unparalleled beauty of Magnesia Surprises along the pathways of Tsagarada. Photo: Wikimedia Walking among the beech and chestnut trees. Photo: Supplied 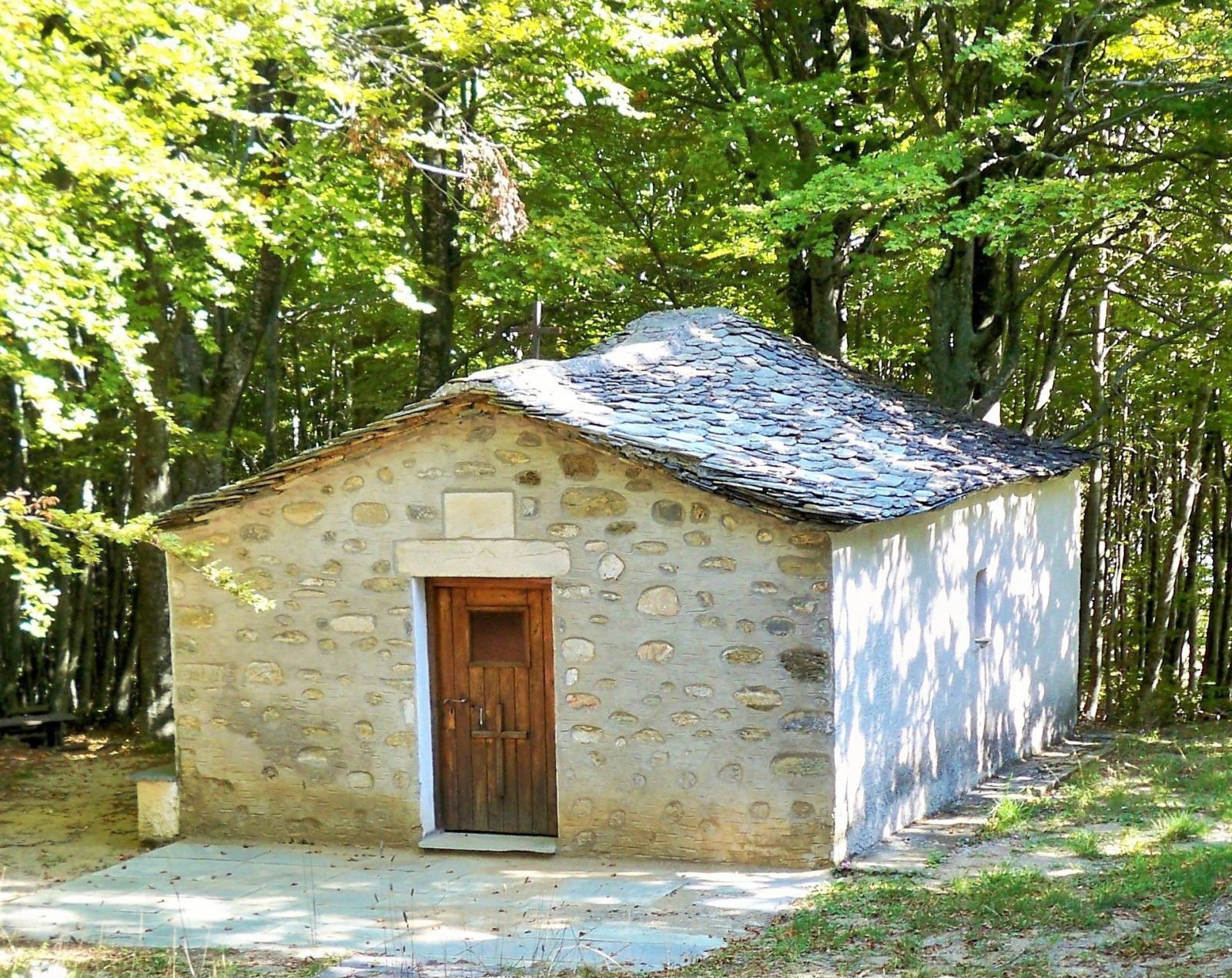 Unlike most of my relatives who travel to Greece, we were never brave enough to get behind the wheel of a hire car. This meant we became frequent users of the KTEL bus service which was actually pretty good considering how everything else in Greece  was faltering on many levels. Of course the downside of bussing it around Greece is that your patience is often tested trying to line up to purchase tickets with queue jumping locals pushing in on all sides.

And even more irritating to our law-abiding nature was the way the bus driver would invariably light up a cigarette as he pulled out of the bus station at the start of any trip and continue chain smoking for the whole journey, the “No Smoking” sign above his head having absolutely no impact. Meanwhile his personal favourite rembetiko music blasted from the speakers placed expertly over our heads while the air conditioning ducts would either numb our faces with frigid air or not work at all.

From the KTEL Bus Station B in Athens we headed to Volos. The bus trip from Athens to Volos was four and half hours long and passed through countryside dotted with forests, olive farms, rivers and valleys.  We even caught a quick glimpse of the instantly recognisable statue of Leonidas (of 300 Spartans fame) through the trees as we whizzed passed Themoplyae.  I remembered the spartan king’s iconic line that my late father Faidon love to recite “Molon Labe”, or in other words “Persians, come and get them!”.

From Volos we hopped on a local bus to head on to the Pelion peninsula which juts out into the Aegean Sea about half way between Athens and Thessaloniki. It is a beautiful picturesque area roughly about the size of the Mornington penisula in Victoria, the main difference being that Pelion has a mountain range running down the centre which rises approximately 4,000 feet above sea level.  It can get very cold and snowy in winter and because the road in is narrow and winding it actually feels quite remote and has a distinctly different, almost alpine feel, from the other parts of Greece we’d visited. At the end of the cobblestone path, you can find one of the beautiful beaches of Pelion. Photo: Supplied The peninsula is still covered in large swathes of natural forest primarily of chestnut and beech and it just happened that when we visited Pelion in late October just happened to be the time when the ripe chestnuts were, everywhere, falling from the trees.  A couple of days later, as we strolled through the forests with the dappled golden afternoon light streaming through the yellowing autumn leaves, we were constantly delighted by the plop, plop, plop sound of the spiky chestnuts falling to the ground interrupting the tranquil silence of the forest. The ground was thick with fallen nuts and you could freely collect as many you could carry home.

As the bus passed small villages it was like we were heading into a part of Greece that had a magical wildness all of its own. It was easy to imagine the centaurs roaming and being mischievous amongst the trees. And there was also another thought that Pan, the ancient god of woodlands, mountains and streams would have been very much connected to this place.  I imagined Pan with his reed pipes dancing among the chestnut trees.

I remembered my readings of ancient Greek mythology and I felt that Pan had an undeservedly bad reputation.  I remembered thinking that he wasn’t all that bad and that he actually gelled with my own love of nature because of his special place in protecting and ruling over everything wild and natural. Of course he wasn’t going to be a popular god as he was always depicted as half human and half animal. His hairy, cloven feet with horns on his head meant that the forest nymphs found him unattractive but Pan consequently developed a wonderful sense of humour and humility. He quickly became one of my favourite gods seeing the adversity he faced in just being himself.  His legend lives on as his antics gave us the English words, panic and pandemonium.  All supposedly because he sometimes caused humans to flee in terror and fear with his powerful booming voice reverberating through the countryside. 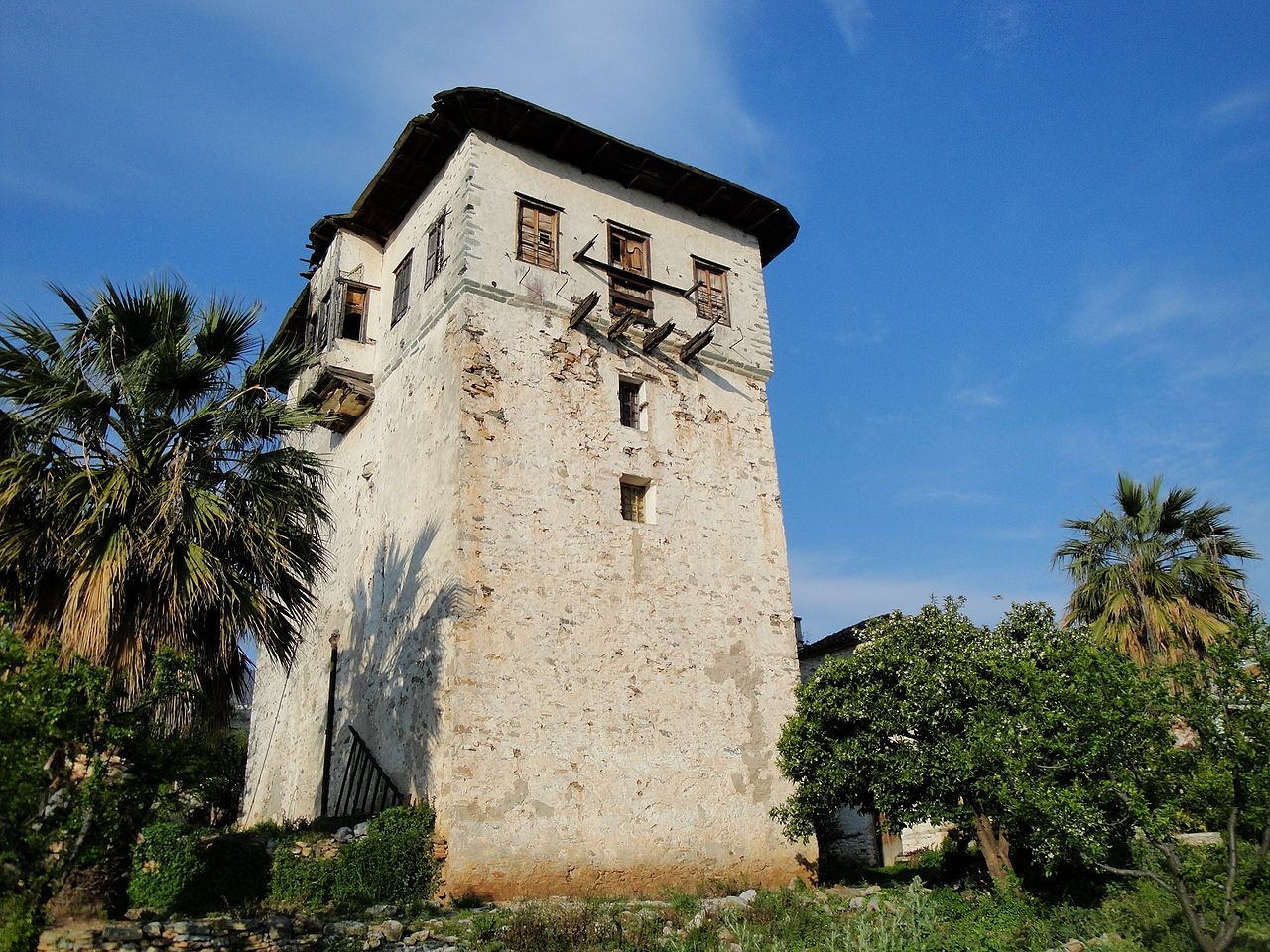 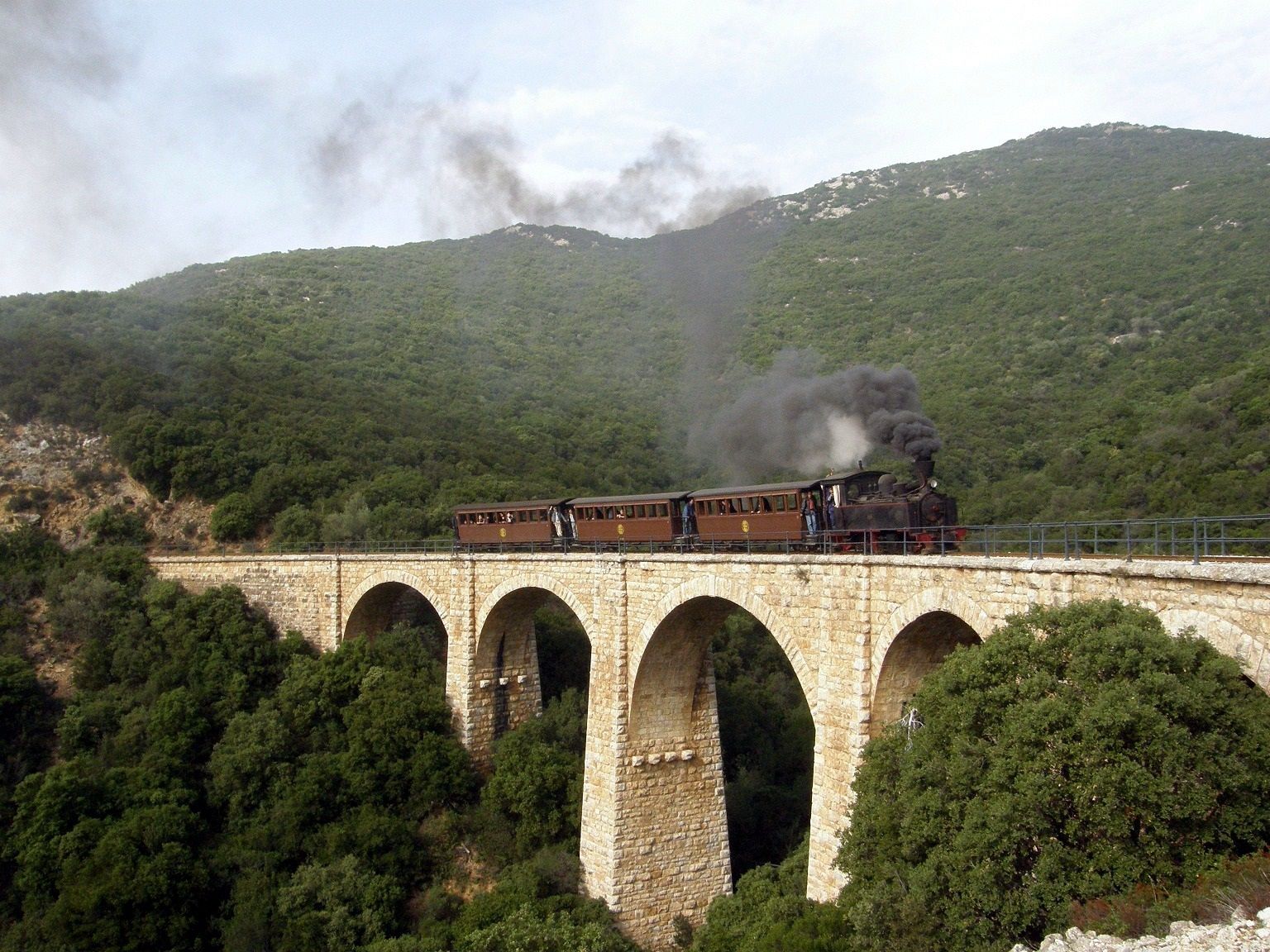 Our bus headed on to our destination, the village of Tsagarada at an elevation of 2,000 feet on the eastern side of the peninsula perched halfway between ocean and mountain top. Tsagarada is famous for its quaint buildings and its network of ancient cobblestone paths. We purchased a map from the local mini market which showed all the cobbled paths which wound their down to the coves and beaches on the coast as well as the walking trails that led through the forest up to the mountain top.

Once we found our accommodation, a few minutes walk from the bus stop, and checked in, we headed to the main plateia of Agia Paraskevi to see the largest and oldest plane tree towering over everything. The town square had seen the summer season out and it looked like many people had enjoyed a night with an ouzo or two.

Over the next few days, we enjoyed exploring the area. The cobblestone paths that led down to various coves and beaches were an absolute delight. The paths led down, down over streams and gullies filled with ferns and mosses.  There were little arched stone bridges and ancient drinking fountains springing directly from the mossy rock face.  The place was literally an enchanted fairyland. At the end of the cobbled path was a spectacular view of the blue Aegean. The cool water of sandy Milopotamos beach soothed our aching muscles and refreshed us for the trek back to Tsagarada.

Taking the walking trails from Tsagarada to the top of the 4,000 foot mountain was a different but equally enjoyable experience.  We wandered among ancient beech and chestnut trees their leaves turning amber and gold from the change of season. The forest floor was carpeted with ivy and the most delicate pink cyclamens. The prickly coated chestnuts lay thick on the ground and we collected as many as we could to take back to my relatives in Athens. There was a magical feeling walking amongst these grand old trees and we felt that this part of the world had remained true to its original natural beauty, unspoilt by the hand of man. Near the top we were able to spend some time resting at the beautiful little hand built stone church of Agios Athonas.

There is  something magical about the Pelion. It is a hidden gem in Greece combining beautiful forests and stunning coastlines. It is off the beaten track and maybe that’s why it retains so much of its authentic character.  We undoubtedly did feel like we had had stepped back in time.

I’m so happy we experienced this place not only because we saw its natural beauty but it reconnected us with nature. It refreshed us and sent us on our way to conclude another memorable time holidaying in Greece.

Things to do in Pelion

The legendary old steam train of Pelion is popularly known as Moutzouris (smudgy). This train started working in the late 19th century and played a key role in the development of Pelion and the overall region of Thessaly. After it was abandoned in the years that followed the Second World War, a few years ago this train started working again, connection some villages of the area. Designed by Italian engineer Evaristo de Chirico, son of artist Giorgio de Chirico, the train’s construction began in 1894, connecting Volos town with Lehonia village. The journey crosses two stone bridges over Anavros river and Vrihonas river.

Centaurs were hybrid beasts (half human and half horse) that lived on Mount Pelion and controlled negative phenomena. Their path in Portaria village is marked with red circles on stones, and is a hidden gem filled with impressive sights.

Agioi Taxiarches, a historical church, was founded in the 17th century and renovated in 1741. Enjoy the historical frescoes inside.

Located at the central square of Makrinitsa, the Museum of Folk Art and History of Pelion is housed in Topali mansion, built in 1844.

An appendix to the Nafplion Worry Bead Museum, the museum in Portaria teaches visitors about the komboloi.

The Ski Centre of Agriolefkes is popular in winter. Located at an altitude of 1,530 metres, it is near the village of Chania.

The Greek School Museum is housed in the school attended by Rigas Valestinlis-Feraios. The building is also known as the School of Rigas.

Pelion is famous for its traditional sweets, especially spoon sweets that are served as a warm welcome to visitors and guests. The recipes are passed down from one generation to the next. Mount Pelion has a characteristic product, small apples known as firikia. Most villages of Pelion have open kiosks selling traditional spoon sweets and liquers made by local women’s associations.