Greek Super League Round 13 Results: Comfortable wins for those at the top

Olympiacos had an easy afternoon at Agrinio against Panetolikos, with PAOK beating Xanthi at home and AEK annihilating Panionios 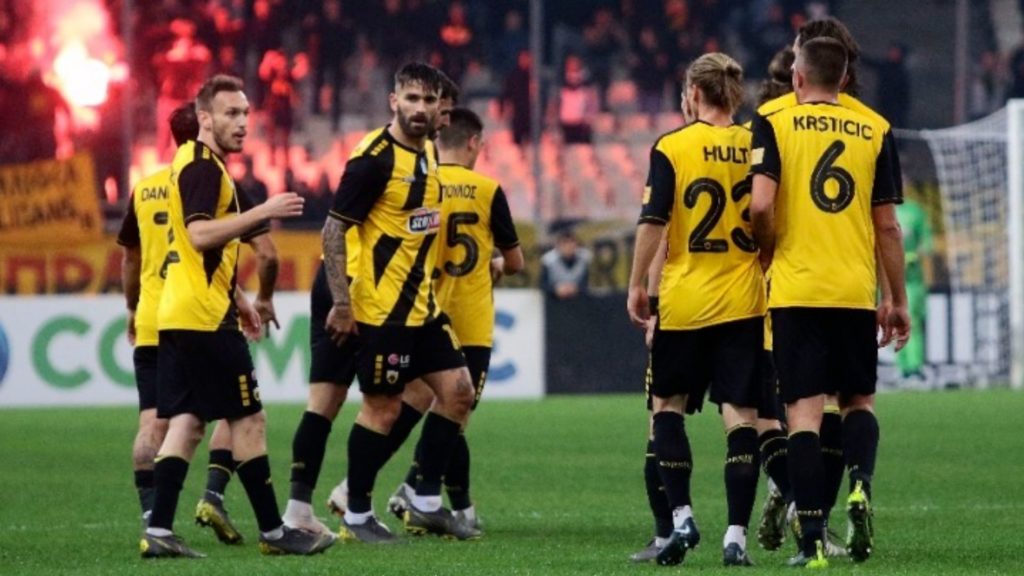 In Nikos Kostenoglou’s final game as AEK manager, his team was able to walk away with an emphatic 5-0 victory against Panionios. Photo: APE/MPE

Round 12 of the Greek Super League had nothing out of the ordinary, with all the teams that are at the top of the ladder walking away victorious.

For the first time in their domestic campaign Olympiacos played well away from home and secured an easy win against Panetolikos, beating them 0-3.

Daniel Podence’s early goal just after six minutes provided the necessary stress relief for the team, as they were able to sit back absorbing the pressure by the home side and strike on the counter.

Youssef El Arabi added another two goals just before the first 45 minutes were up to create the final score, as Makis Chavos’ men were unable to capitalise on their chances.

Now Pedro Martins and his men will focus on Wednesday’s crucial game against Crvena Zvezda that will decide their European fortunes.

At Toumba, PAOK struggled a lot more than they would’ve liked against Xanthi but eventually were able to find the goals they needed to win 2-0.

The home side scored more than once but all their efforts were (rightfully) cancelled out thanks to the VAR, leaving them frustrated.

The solution came from the bench, with Diego Biseswar coming on to score the opener on 80′ minutes and providing the assist to Jose Crespo for the second.

The champions will have their work cut out for them next week as they travel to Agrinio to look for a win against Panetolikos.

Meanwhile, in Nikos Kostenoglou’s final game as coach, AEK cruised past Panionios 5-0 at the Olympic Stadium of Athens.

Portuguese striker Nelson Oliveira proved to be the great difference between the two teams, as he scored a hat-trick and even had another goal cancelled.

The other two were provided by Daniele Verde and skipper Petros Mantalos.

Panathinaikos on the other hand failed to leave Volos with all three points in the bag as the home side was able to fight back for a 1-1 draw.

The visitors took the lead after a successfully converted penalty kick by Chatzigiovanis, only for Juan Ferrando’s men to respond in a similar manner with Juan Muniz.

Atromitos and Aris were also stuck on level terms in a thrilling encounter, with former Nottingham Forest striker Apostolos Vellios giving his team the lead with an incredible bicycle kick, only for Bruno Gama to equalise on the dying minutes of the first half.

Giorgos Manousos’ penalty kick gave Atromitos the lead once again and with only four minutes of regular time remaining, but Giorgos Fetfatzidis had not said his final word and with a cheeky strike that left goalkeeper Balasz Megyeri stunned, allowed Aris manager Michael Oenning to extend his unbeaten run.