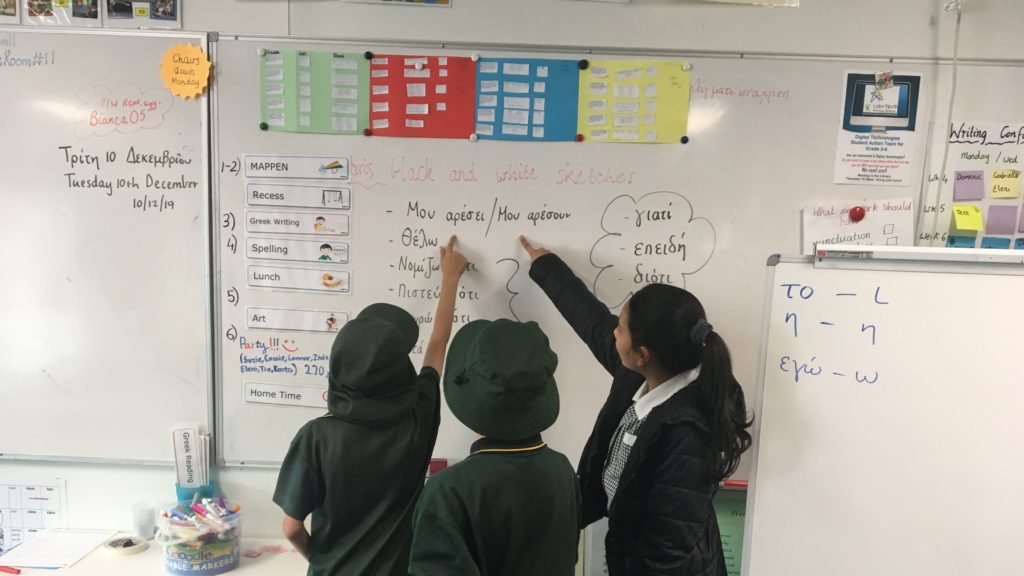 Connor, Zisis and Cassie point out what they have learnt in class. Photo: NK

There’s the faint smell of orange peel, spanakopita and sharpened pencils during lunch break at the Greek prep classroom of Lalor North Primary School (LNPS), and a babel of languages though you’re not quite sure whether it’s Greek or English that the children are speaking. In the room next door fourth graders jump from one language to the other with relative ease.

Zisis, aged 10, tells Neos Kosmos, “Sometimes I forget which of the two languages it is I’m speaking.”

An introduction into the program makes it clear that LNPS has a lot to offer as far as foreign language programs are concerned. The success of the program lies in the fact that the school’s educators aren’t just teaching a language but teaching through language with 50 per cent of the lessons in English and Greek from Prep to Year 2 and 40 per cent in Greek from Year 3 through to Year 6.

The school’s bilingual approach to education makes it unique as the only such state-run Greek educational environment in Victoria, where there are 14 such bilingual environments – all of them slightly different. However language acquisition is just the tip of the iceberg because the school may also be the only one in Australia, or the world for that matter, where Greek, North Macedonian and mainstream classes operate side by side.

LNPS Principal David Williams points to the Greek population that used to live in the area, which resulted in the language being brought to the school to serve their needs in 1977, however though many of them have dispersed, the program continues to survive with 37 children who come from areas as far as Craigieburn, Mickelham and Beveridge in order to reap the benefits of the bilingual program not only in language acquisition but in general academic achievements and NAPLAN results.

As for the North Macedonian program operating since 1984, it numbers 109 students and is reflective of the concentration of the community in Lalor.

“We are one school with three distinct programs, but we are connected because we care about all of our students,” Mr Williams told Neos Kosmos.

“People raise their eyebrows when I tell them of the two foreign languages we offer,” he said, adding that the prevalence of two conflicting diaspora communities could have turned into a ghettoisation of school classrooms based on race, but has instead been instrumental to build self-awareness, growth and respect for all cultures thanks to the school’s ethos that values ‘unity’.

When he first entered the school as principal two years ago, Mr Williams said he was in for the same surprise that any visitor has upon visiting LNPS and seeing the successful way in which it delivers not just language, but content at large, reasserting his belief in the benefits of the bilingual brain.

“Whether it be Greek, Arabic, Farsi, Punjabi, evidence tells us that the more children speak another language at home, the better their results will be in English language acquisition,” Mr Williams says, noting that the academic results of students in the Greek bilingual program reflects the strong body of research. And LNPS has built a structured and coordinated program over the years that serves to reinforce the scientific evidence on bilingualism.

But programs and communities such as this one can only exist if they are embraced by staff who believe in them with conviction. And the teachers at LNPS lead by example, with Greek teacher Ana Koutsouroupas having only kind things to say about all her colleagues.

“We plan programs together, and we enjoy working together,” she says, adding that she also has support from the Greek consulate with teachers coming in to work with more advanced groups of kids within the classroom and teachers’ aides also helping students in need of additional assistance. “We differentiate learning for every child by splitting them into groups, so any student could come to the programme, even one who doesn’t speak the language at all and this has happened in the past. In fact, we currently have a student who came to us in Year 3 without known any Greek but is now writing essays in the language.”

The smaller class sizes and personalised approach to teaching have benefits for the students in the program which more than meets the demands of Victoria’s curriculum.

You’d think that squeezing a curriculum into class time and teaching it in both language would be a challenge, but it is actually done with relative ease. Connor, aged 10, said: “We’re doing brochures at the moment. Our English teacher told us how to do them, and to make a brochure of our school,” he said. “Then our Greek teacher came and used what we already knew so that we can create a brochure about different countries. So we’ll do the same thing but using different topics.”

Thai-Greek Cassie, aged 10, gives another example of language reinforcement. “I like going to St Basil’s home and speaking Greek with the people there,” she said.

“They tell us their stories and we dance Greek and they sometimes join in.”

The structured activities are extremely beneficial.

“They eventually end up with two brains,” Ms Koutsouroupas said, adding that there have been students who have come from Greece to the classroom and vice versa.

“I’ve had students who left our classroom and went to Greece and it wasn’t an issue for them, and then they came back to us and just carried on.”

Young Cretan-born Zisis is one example of that. “I’m going to go back in two years. I feel bad that I’ll leave all my friends behind but Thomas, who used to go to school here has gone back and so I’ll have a friend there,” he said. From the school play Ms Koutsouroupas is sure that students like Thomas and Zisis will cope in their new environments.

“The teachers from the consulate are surprised when they see my five-year-olds in prep reading, because they say that not even children in Greece learn to read at such a young age,” she said, but in the LNPS classroom things are structured to make learning as natural as breathing, and the kids react to her own passion for teaching.

“I was trained as a VCE Legal Studies teacher, and also did Greek at La Trobe University. But (in 2006) I came here as a casual teacher and was impressed with the program and was very happy to stay when I was offered a job.”

Years later, she can’t imagine doing anything else. One of the most gratifying parts of her job, she says, is seeing first-hand the improvements in the children, and she wishes more people knew about the benefits of the program.

“People come back and find me years later and tell me of the impact that the program has had on their later lives, and that is very rewarding,” she says.

“There’s nothing more Australian than speaking the language of your grandparents,” he says.

PROGRAM TO CONTINUE
There has been talk that the language program is in danger as Greeks move away from Lalor North resulting in dropping numbers, Mr Williams told Neos Kosmos that this will not be the case as long as he is principal stressing his commitment to the program for as long as there are students to attend it. He welcomes enrolments from all districts and says that the school is equipped to accept students of all levels and from all areas. The school is also open to anyone interested in visiting the program to see firsthand how it works.