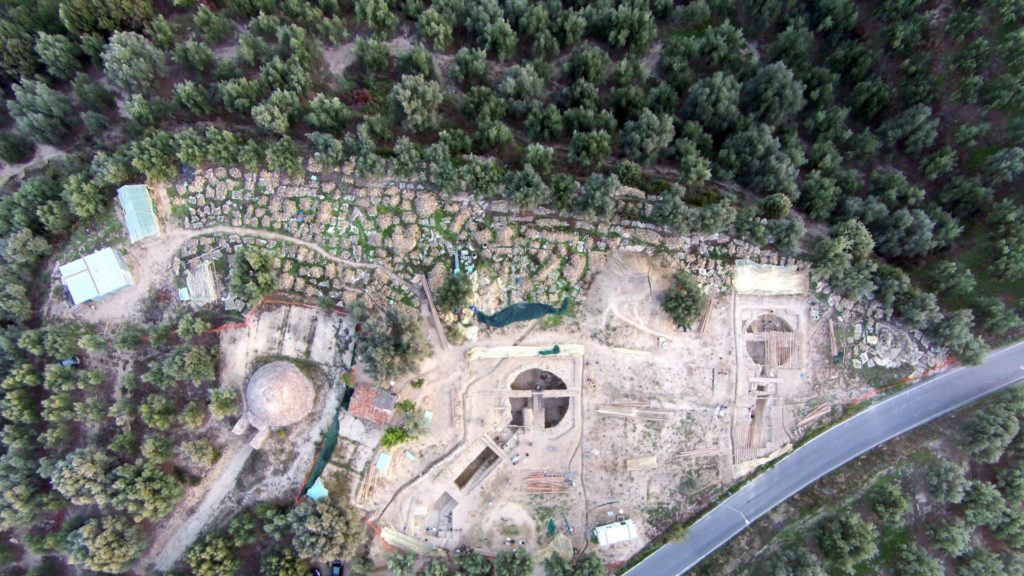 An aerial view shows the extent of the work being done around two 3,500-year-old tombs of the Mycenaean era. American archaeologists, who had been working for two years on the site, uncovered the two monumental royal tombs. The site is close to Bronze Age palace of Pylos that is mentioned in Homer’s “Odyssey”. Photos: Ministry of Culture and Sport of Greece/AAP

The Greek Ministry of Culture and Sport announced on Tuesday, 17 December, the discovery of two royal tombs dating back to the Mycenaean Period (1650 to 1100BC) at Aidonia, near Nemea in the northeastern Peloponnese.

The first structure, whose roof was still intact, contained two burials and the bones of 14 more people who were brought in from other sites. The second tomb, whose roof had collapsed, contained three primary burials, a ministry spokesman said.

The Aidonia site was first excavated in the late 1970s and contains up to 20 tombs of the Mycenaean era. It was a major centre of that civilization situated as it is near the Bronze Age palace of Pylos which is mentioned in Homer’s Odyssey as the seat of wise King Nestor.

The ministry said that while the site had been looted in the past, particularly in the winter of 1976-77, the rubble that had accumulated over the millennia kept the recently discovered tombs safe from looters.

READ MORE: The stunning prehistoric art of the Pylos Agate

The archaeologists, who are from the University of Cincinnati, have been working on the site over the last two years. They recovered clay pots and figurines from the tombs as well as other small objects such as a gold seal ring (see below) and a golden amulet etched with an Egyptian goddess which reflects the extent of trade links in Bronze Age Greece.

The ministry said the larger of the recently discovered tombs was 12 metres in diameter at floor level and the surviving stone walls rose to a height of 4.5 metres which is less than half of its original height. The second tomb which is two thirds the size of the larger structure with two metres of its wall surviving. Both were of the Tholos type of underground construction used to bury Mycenaean royals.

In 2015, a grave close to the present site yielded a rich trove of gold and silver treasure, jewelry and bronze arms that had been buried with a man who is thought to have been an early ruler of Pylos.