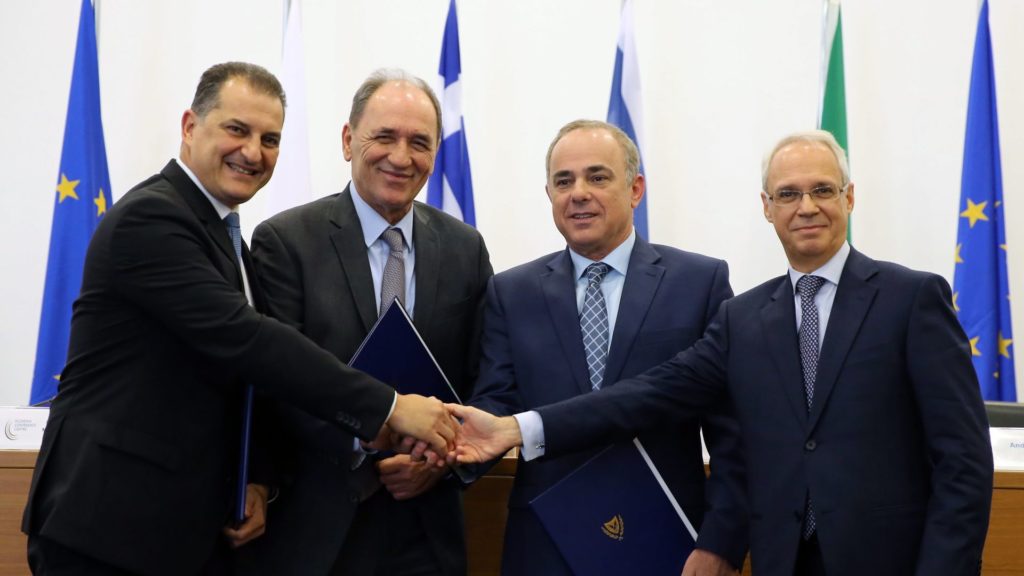 Cypriot Minister of Energy, Yiorgos Lakkotrypis (from right), Greek Minister of Environment, Energy and Climate Change Georges Stathakis, Israeli Minister of Energy and Water Resources Yuval Steinitz and Ambassador of Italy Andrea Cavallari join hands after they signed a memorandum on EastMed pipeline in Nicosia, Cyprus, on 5 December 2017. The leaders of Greece, Israel and Cyprus are to meet in Athens to sign an agreement on 2 January. Photo: AAP

The signing of the EastMed Act by US President Donald Trump earlier this been has been welcomed in a joint statement by the American Chambers of Commerce of Greece, Cyprus and Israel.

The organisations said the Eastern Mediterranean Security and Energy Partnership Act of 2019 signed by Mr Trump on 20 December heralded “new era in the relations between the United States and Greece, Israel and Cyprus.”

The chambers said the act represented an important shift in US policy in the eastern Mediterranean that reflected the stratergic importance of the region and its importance to the security of the US and Europe.

“Through the Act, the United States commits to continue robust official strategic engagement with Israel, Greece and Cyprus and to actively participate in the trilateral dialogue on energy, maritime security, cybersecurity and protection of critical infrastructure conducted among the three countries,” the statement said.

“The United States further commits to continue to support diplomatic efforts with partners and allies to deepen energy security cooperation among Greece, Cyprus and Israel and to encourage the private sector to make investments in energy infrastructure in the Eastern Mediterranean region,” it said.

“A joint United States-Eastern Mediterranean Energy Center in the United States may be established to leverage the experience, knowledge, and expertise of institutions of higher education and the private sector in offshore energy development to facilitate cooperation among the four countries.

“The Act enhances the United States’ engagement in the Eastern Mediterranean and reaffirms its commitment to strengthening and expanding its strategic energy and security cooperation with its key allies and partners in a region. At the same time, the law creates another important viable energy option through the overall support provided on the construction of EastMed gas pipeline,” the statement said.

American Chamber of Cyprus president Haris Kakoullis said that the act:”recognises the new realities in the East Med. basin, and opens the door to significant investment opportunities in all three countries.”