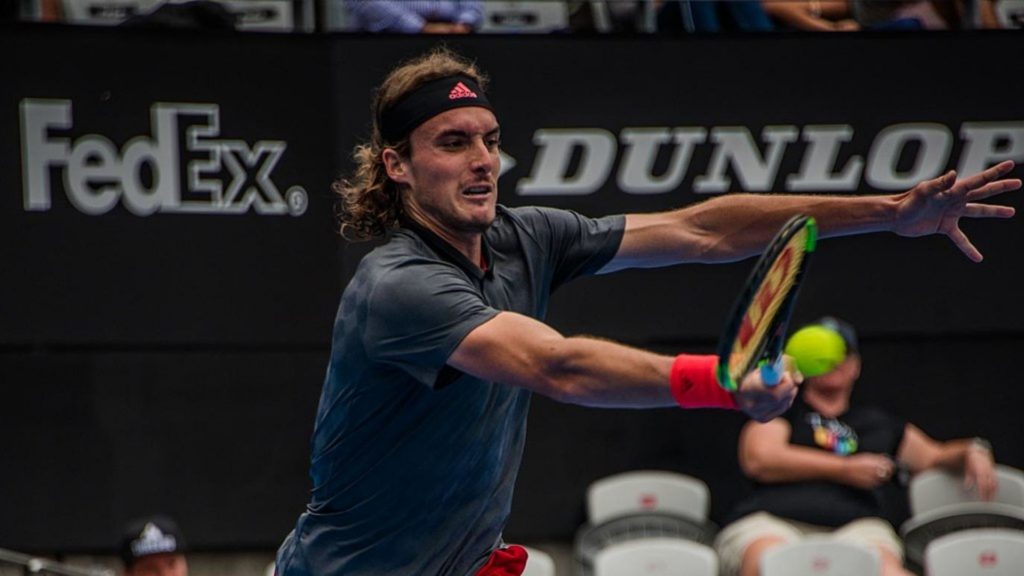 The Greek community of Brisbane celebrated New Year’eve with tennis hero Stefanos Tsitsipas and team Greece  which will competing in the city for ATP Cup starting on Friday, January 3.

The Greeks will begin their campaign in the inaugural 24-team tournament at 10am on Friday, when they face the Canadian team.

On New Year’s eve the team was at Nostimo, a restaurant that is part of the Greek Club in Brisbane. The world number 6 was joined by team mates Michail Pervolarakis, Markos Kalovelonis, brother Petros Tsitsipas, Alexandros Skorilas and the team captain, who is also Staefanos’s father, Apostolos Tsitsipas.
The Greek team socialised with fellow competitors. Greece is in Group F with Canada, Germany and Australia.

Sipping a martini created for him at Nostimo, Stefanos Tsitsipas told atptour.com that the Greek team had prepared well.

“We have been putting ourselves to work on the court with the rest of the team. Our chemistry seems to work really well… I am really proud to represent Greece in this competition for the very first time. We just met the locals from Greece that live here in Brisbane. For us, it is something of huge importance to have people that we really feel connected with and they are going to come and support us. I think that is what is going to make this event so special.”

He recalled the warm reception he had received last year from the Greek community all over Australia as he fought his way to his first Grand-Slam semifinal at the Australian Open.
‘

“With Greeks, [passion and energy] is in the culture. We feel very connected to one another. It is almost like a family. They put a lot of energy in when they are out on the court chanting and giving their best for us.

“It just feels good to be Greek. There are so many benefits that I can take from that,” said Mr Tsitsipas.

Kostas Manekas, the restaurant manager, created a martini to honour Tsitsipas’ 2019 season in which he won three titles, including the Nitto ATP Finals at The O2 in London, to finish the year with an ATP Ranking of No. 6.

“We wanted to celebrate with you,” Mr Manekas said. “We came up with a recipe that we hope represents you as an individual.”

The drink features ouzo, a popular liquor in Greece; an olive branch, to represent victory; vodka, because of Tsitsipas’ mother’s Russian heritage; and limoncello, which gives the drink a yellow tint.

Greece qualified for the ATP Cup largely because of Mr Tsitsipas’ world ranking. Greece’s fortunes will improve should the Greek star can get off to a good start.

However, besides the talent of Stefanos the team is relatively young, with the oldest player being 25 years old, and have the potential to succeed. Along with the help of some of the most passionate fans in the world.

“Stef is going to play an important role to raise the level. It is the team spirit that counts at the end, and I think obviously that is an important thing,” said Apostolos Tsitsipas. “[The Greek fans] are going to be our extra support all these days… I think it is going to be important to be next to their players.”