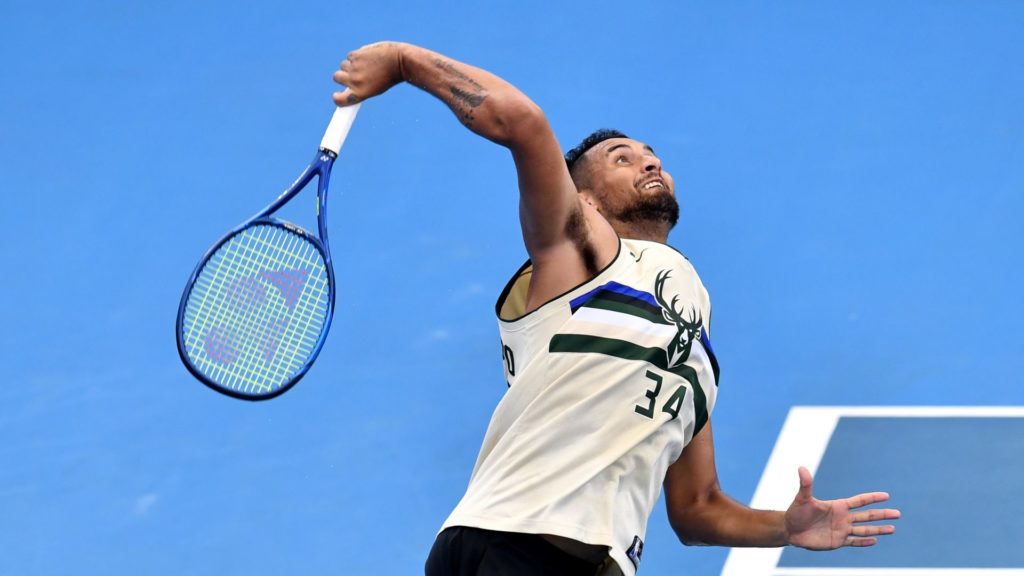 Nick Kyrgios of Australia is seen during a practice session for the ATP Cup at the Queensland Tennis Centre in Brisbane, Thursday, 2 January, 2020. Photo: AAP

NICK KYRGIOS
It all started with a tweet. We’ve all come to know Nick Kyrgios as a ‘bad boy’ inside the courts and a heavy penalty decision that is still pending in regards to his behaviour is solid proof of that. However during the recent bushfire crisis, Kyrgios has shown a more compassionate side to himself. Urging Tennis Australia to take action in support of the victims and going even a step further as to donate $200 out of each ace he scores towards those that are in dire need during these trying times, spurring his fellow athletes to follow suit, the 24-year-old has truly been a beacon of hope and a shining example for all of his fellow Australians. This is a time when people need to come together and Kyrgios’ actions should be the norm.

SOKRATIS PAPASTATHOPOULOS
It wouldn’t be a stretch to say that the national team captain has been under scrutiny during his tenure at Arsenal. His recent performances have left a lot to be desired and both he and the “gunners” disappointed fans in London with the way in which they’ve started the season. The recent change in the managerial position saw former assistant manager to Jose Guardiola, Mikel Arteta take over at the club. Of course, with a new manager in place, players need to give their all to prove that they are deserving of their place in the squad. Sokratis did just that in last weekend’s encounter with Manchester United, as he secured the club’s victory scoring the second goal with a powerful header from a corner kick that left David De Gea stunned. Surely a comeback that only a player of his quality could accomplish.

VASILIS SPANOULIS
The Olympiacos captain has made history in the Euroleague basketball tournament, becoming the player who has scored the most points in the history of the competition. Spanoulis’ career has seen him win several Euroleague titles and participate in many final fours with both Olympiacos and his former club Panathinaikos, as he has been playing in Europe’s most important club competition since the late 90’s. In last Thursday night’s game against Fenerbahce (that Olympiacos lost 87-96), Spanoulis scored a crucial three-pointer that saw him become the single player in the tournament’s history to break the 4150-point threshold. Furthermore, he is already the player with the most assists (1480), and most minutes played (8596) among other records he has shattered. Despite his 37 years of age though, he still claims to feel great and that he is still far from the last day inside the courts. A legend among legends.

GREEK FOOTBALL
The ugly scenes that followed Olympiacos’ draw against Volos in the final day of the Greek Super League for the year simply indicated that a change in leadership is highly necessary in Greek football. Olympiacos chairperson Evangelos Marinakis’ continuous threats towards the referees that made questionable decisions during his team’s crucial game and the attack by AEK main shareholder Dimitris Melissanidis on former professional referee Anastasios Kakos during a live TV show only flared tensions and the attack that followed on Aggelos Evangelou’s house seemed to be a consequence of this situation. Thankfully a meeting between the heads of Greek football and the people in charge of the referee’s union lead them to cancel their decision to strike, otherwise the sport may have been once again stuck in limbo.

A-LEAGUE/FFA
Just as the situation seems to be deteriorating outside the pitch in Greece, so is the quality of football inside the field in Australia. People continue to move away from the product given to them by the main stakeholders as empty promises continue to be made by those in charge of the sport. Review committees, second divisions, conversation after conversation, yet none of it seems to be going anywhere. So many young and talented footballers are forced to abandon their favourite sport due to the club’s inability to support them, while the fully professional A-League clubs continue to remain too small a number in order to provide sufficient positions for high level football. The salary cap is drowning out any chance for clubs to attract crowds. Australian teams continue to plummet in comparison to their Asian counterparts. Any initiative taken by state federations is drowned out by the lack of a professional tournament. Nothing is being done. Football may be the sport with the most participation but it also the one with the least professional handling.