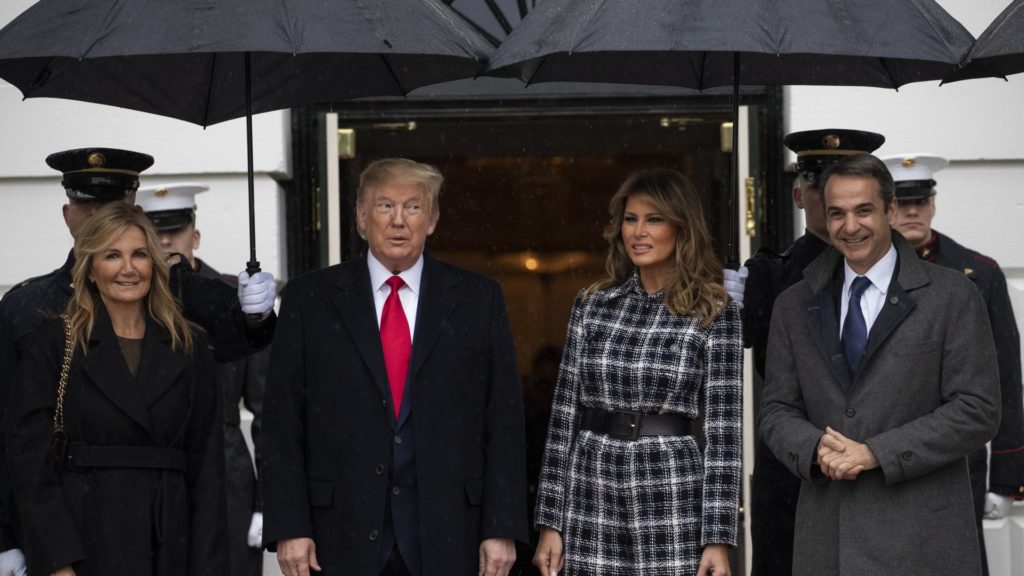 08/01/2020 07:38 President Donald Trump, accompanied by first lady Melania Trump, stand as they welcome Greek Prime Minister Kyriakos Mitsotakis and his wife Mareva Grabowski-Mitsotakis as they arrive on the South Lawn of the White House on Tuesday. Photo: AAP

Greek Prime Minister Kyriakos Mitsotakis had a successful meeting with US President Donald Trump on the second day of his official visit to the United States and first day in Washington. This meeting may have been successful, however Athens’ complaints against Turkey’s provocations and its illegitimate memorandum with Libya came second to recent political developments in Iran.

“The agreement signed between Turkey and Libya infringes upon Greece’s sovereign rights and essentially causes great concern and instability in a region which is already highly problematic,” Mr Mitsotakis said ahead of his meeting with the US President.

“So we’ll be very much looking to your support to make sure that these types of provocative agreements are not being put into place.”

But if he had hoped to drum up support for breaches to Greece’s sovereignty by Turkey from Mr Trump, he did not get it. Despite diplomatic tension in the Eastern Mediterranean, Mr Trump steered clear of denouncing Ankara, refusing to weigh in on Athens dispute with Turkey over access to natural gas under the Mediterranean.

After the assassination of General Qassem Soleimani, Iran’s military commander, in a US drone strike, the US bases in Turkey have gained greater significance.

For this reason, when asked by journalists if he would demand that Turkish President Recep Tayyip Erdogan pull back from the provocative move, Mr Trump said: “When you’re talking about Libya, we’re discussing with President Erdogan, we’re discussing [with] many other countries. I just spoke with the chancellor of Germany, with Angela [Merkel], and we talked about that subject specifically — Libya and what’s going on. We’ll be talking to Russia: they’re involved. A lot of countries are involved with respect to Libya. And it’s, right now, a mess.”

The US President, a “fan” of Mr Trump did not take sides. A senior US administration official said: “President Trump has an excellent relationship with President Erdogan, as well as with Prime Minister Mitsotakis, and so we prefer to focus on the things that we have in common and pursuing the common interests we have in security in the Eastern Mediterranean region, rather than to look at where there might be provocation.”

While he didn’t back Greece in denouncing the infringement of the country’s sovereign rights, even as Greece offered strong backing to Turkey over the killing of General Soleimani, at a time when other European countries have been reluctant to show their support. “We have close relations with the Arab world, but we do not forget who our allies are,” Mr Mitsotakis said at the Atlantic Council think tank in Washington prior to his meeting with Mr Trump.

Greece’s main opposition SYRIZA party called the Greek visit to the US a “fiasco”, however the Greek government has played it down. Greek Migration Minister George Koumoutsakos said that the US position made sense given the escalation of the situation in the Middle East and Turkey’s talks with Iran. “Was there anyone who was realistically expecting a public statement from the US president against Turkey? Anyone who was expecting this was wrong,” said Greek Migration Minister George Koumoutsakos.

Washington did however back the EastMed pipeline agreement signed last week which will make Greece an energy hub in a deal that has irked Ankara.

So while the US publicly won’t denounce Turkey, there is a thrust of diplomatic activity working in Greece’s favour. On the last day of his trip to the United States, Mr Mitsotakis met with the United States Committee on Foreign Relations, which influences foreign policy, and had discussions with a number of leading senators, including Republican Robert Menendez, who pioneered the promotion and voting for the EastMed Act in December.

Greek government sources favorably pointed out how meeting several members of the Senate Committee on Foreign Relations is not a regular occurrence for a foreign leader.

At this meeting, US interest was shown for investment opportunities in Greece and the prospect of its ‘return’ as a leading force in the Balkans and a stabilizing power in the eastern Mediterranean.

Following the meeting, Mr Menendez tweeted: “Pleased to welcome Greece’s Prime Minister Mitsotakis to the Capitol today to discuss challenges in the eastern Mediterranean and reaffirm our shared commitment to democracy, human rights, and rule of law.”