Olyroos’ quest to qualify for Tokyo Olympics begins with a draw 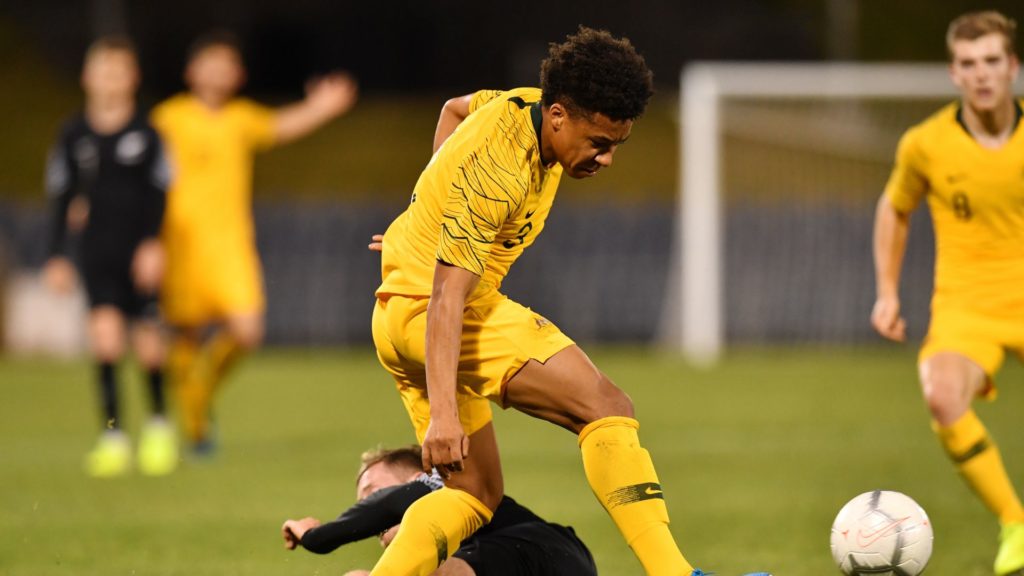 Samuel Silvera of Australia is tackled by Jake Porter of New Zealand during the Australia U23 v New Zealand U23 International Friendly at Campbelltown Stadium in Sydney, Monday, September 9, 2019. Photo: AAP Image/Dean Lewins

The Olyroos have had to settle for a share of the points with Iraq in their opening Group A, 1-1 encounter at the AFC U 23 Championships in Thailand on Wednesday evening. The tournament doubles as a qualifying tournament for the Tokyo 2020 Olympic Games.

With temperatures hovering around the 32-degree mark on a soft spongy pitch at Thammasat Stadium, the match with Iraq was preceded by a minute’s silence to honour the fire victims. The Olyroos dominated possession early with an intense high press, but couldn’t capitalise on their greater possession with forward Reno Piscopo squandering an early chance and fellow forward Al-Hassan Toure having a goal disallowed because of a foul in the build-up.

Iraq worked their way into the match in the second half, but it was the Olyroos who took the lead with a spectacular 30 metre free kick from Wellington Phoenix winger Piscopo in the 62nd minute.

A quarter of an hour later, the Iraqis struck back with a quality strike of their own when substitute Mohammed Qasim Nassif stepped inside an Olyroos challenge and fired a curling shot from the edge of the box finding its mark inside the far post beyond the outstretched arm of diving Olyroos keeper Tom Glover.

The Olyroos narrowly missed snatching a late winner when a Dylan Ryan header from an Alex Gersbach cross, was denied a goal by the woodwork, with the keeper beaten.

Leftback Gersbach played a full game whilst fellow defender Tass Mourdoukoutas was an unused sub on the bench.

The Olyroos now have a four day recovery before taking on their next group opponent, host nation Thailand, (Sunday, 12.15 am AEST) in front of what can be expected to be a large parochial home crowd at Rajamangala Stadium in Bangkok. Thailand brushed aside Bahrain 5-0 in their opening group game, to head the Group table ahead of its encounter with the Olyroos.

The top two teams from the four groups will advance to the quarter-finals.

The AFC U-23 Championship’s top three teams – the two finalists and the third-place play-off winner – will join Games hosts Japan at Tokyo 2020.