It is not the summer we want, Australia is engulfed by mega-fires. We have lost people, animals, and property to the inferno. It may seem inappropriate to consider reading as leisure, yet reading may be more essential now than ever.

It is both in crises and in downtime when reading helps us to reconfigure, reconsider, rethink and question. Or, take time away from the challenges that we face.

For those that are taking time, or can take time to regroup, to wash away the past year, feeding the soul and the intellect is equally important. What better way of nurturing our mind than through an engrossing and maybe life-changing book?

There is something for everyone, the political junkies, the history buffs, and all lovers of compelling and thought-provoking literature.

Niki Savva’s Plots and Prayers is heroin for political junkies. It is a fast-paced, funny and detailed chronicle of the events that led to the ousting of Prime Minister Malcolm Turnbull and the rise of Scott Morrison as Australia’s latest prime minister. Savva says Dutton was suspicious of the Morrison clique’s positioning, particularly ahead of the fist spill on the Tuesday that caught him by surprise. Dutton is quoted pointing out that the whip, Nola Marino, was given a heads up about what Turnbull was planning. Interviews with key players and keen observations by Savva the journalist, ABC Insiders panellist and former adviser to Howard government treasurer Peter Costello are the plasma of the book. Plots and Prayers is a political manual of the cruel comedy that politics can be. Equally, in Plots and Prayers one can read between the lines and understand the opprobrium Scott Morrison is now facing due to his clumsy response to the bush fires.

Damascus Christos Tsiolkas’ latest offering is one of his most demanding books since Dead Europe. Damascus, based on the Apostle (Saul) Paul, seeps into the reader’s skin. It draws out dreams and creates sleepless nights. Based around the gospels and letters of St Paul, and focusing on characters one and two generations on from the death of Christ, as well as Paul (Saul) himself, Damascus nevertheless explores the themes that have always obsessed Tsiolkas as a writer: class, religion, masculinity, patriarchy, colonisation, exile; the ways in which nations, societies, communities, families and individuals are united and divided – it’s all here, the contemporary and urgent questions, perennial concerns made vivid and visceral. Damascus is an historical novel of immense power and an unwavering examination of faith, tyranny, revolution, cruelty and sacrifice.

The Glebe Point Road Blues by Vrasidas Karalis, who holds the Sir Nicholas Laurantos’ Chair in Modern Greek Studies at the University of Sydney, is a collection of stories born of imaginative recreations of living on Glebe Point Road in Sydney. The author evokes episodes and quirky moments from the lives of ordinary and extraordinary people. The stories veer to the ethereal but are anchored in real life. The book is structured around snapshots of compassion, despair, love, death and evil. The narrative melds prose and poetry: the everyday and the common leads to the transcendental and the outlandish. Glebe Point Road is transformed into a universal landscape of transfiguration and redemption, in which a professor from university, a larrikin book-seller, a Greek expatriate, a Vietnam Vet, a religious transsexual, an Iraqi-Jewish doctor, a child of the Stolen Generation, a young poet, an old Nazi, a New Zealand bushido fighter, a transgender assassin, and many more wrestle with their angels and demons.

Peter Polites lays out a stinging observation of Sydney’s class divide and the unrestrained drive for success at all costs. In The Pillars the character Panos, an unsuccessful writer, spends time lobbying against a mosque being built across the road from his home and the occasional meth-fuelled orgy. Panos has found a job as ghostwriter for a wealthy property developer and the pay cheque makes him turn a blind eye to dodgy dealings. In a world full of consumerism and blind aspiration, Panos is desperate to escape his lot in life. This is a novel about dark desires and moral ambiguity. The Pillars is an astonishing new novel from an exciting contemporary voice. 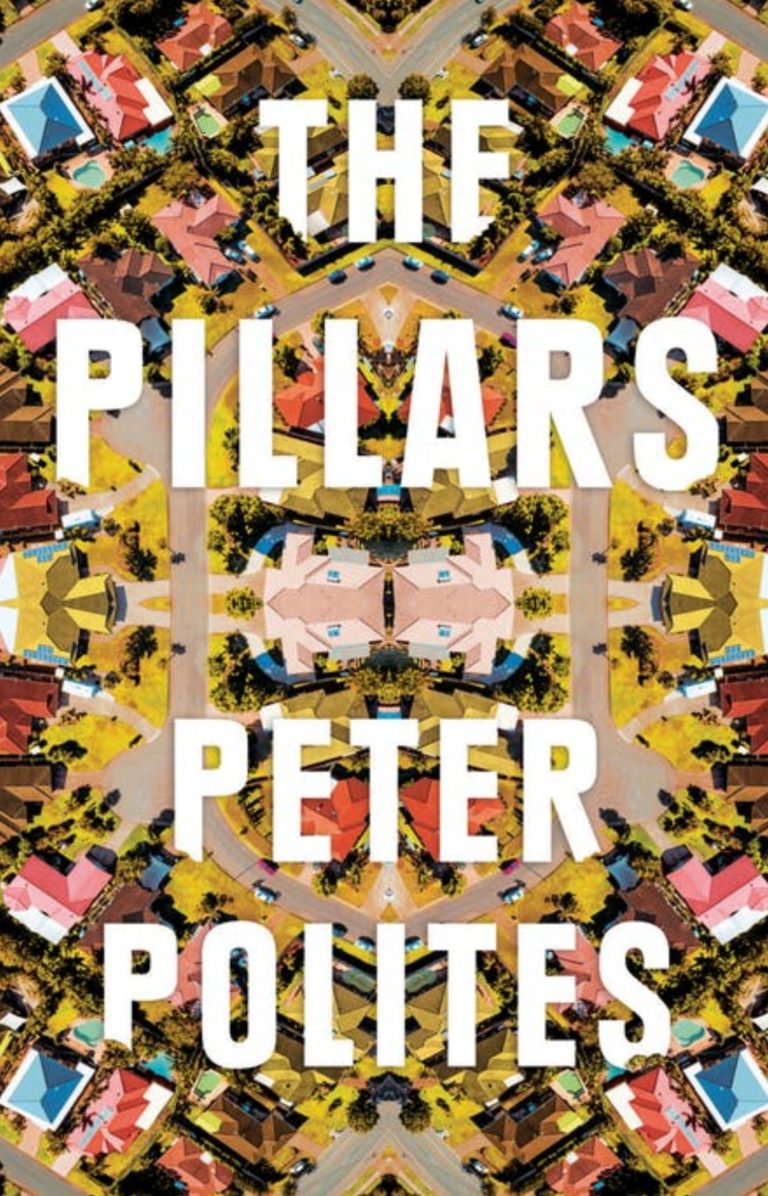 In Who Owns History? Geoffrey Robertson, Australian lawyer, global media personality and justice campaigner, takes his cue from the Roman barrister Cicero. Robertson argues that justice requires the return of looted antiquities on display in the museums of Britain, France, Germany, Belgium and America. He establishes the historical significance such national antiquities hold, and the degree to which their plunder remains unchecked. He lays out the significance of the most globally recognised Greek claim for the return of the Parthenon Marbles. He describes the significance of the Parthenon in the history of Greece and its global significance. The Parthenon was planned and constructed as a single entity, its artworks and sculptures a vital part of the edifice as a whole. Re-unification as Robertson argues is important to our universal understanding of the development of human civilisation.

6. Tragedy, the Greeks and Us by Simon Critchley (philosophy & ancient world history, non-fiction)
Penguin Random House
From the moderator of The New York Times philosophy blog ‘The Stone’, a book that argues that if we want to understand ourselves we have to go back to theatre, to the stage of our lives .  Tragedy, the Greeks and Us presents a world of conflict and troubling emotion, a world where private and public lives collide and collapse. A world where morality is ambiguous and the powerful humiliate and destroy the powerless. A world where justice always seems to be on both sides of a conflict and sugarcoated words serve as cover for clandestine operations of violence. A world rather like our own.  The ancient Greeks hold a mirror up to us, in which we see all the desolation and delusion of our lives but also the terrifying beauty and intensity of existence. This is not a time for consolation prizes and the fatuous banalities of the self-help industry and pop philosophy.

Roderick Beaton has elegantly written one of the most engaging narratives on modern Greece. The nation has been brought under repeated scrutiny during the financial crises that have convulsed the country since 2010. The worldwide coverage has shown up how poorly we understand modern Greece. We think we know ancient Greece, the civilisation that shares the same name and gave us just about everything that defines ‘western’ culture today, in the arts, sciences, social sciences and politics. This book sets out to understand the modern Greeks on their own terms. How did Greece come to be so powerfully attached to the legacy of the ancients in the first place, and then define an identity for themselves that is at once Greek and modern? This book reveals the remarkable achievement, during the last 300 years, of building a modern nation on, literally, the ruins of a vanished civilisation. This is the story of the Greek nation-state but also, and perhaps more fundamentally, of the collective identity that goes with it. It is not only a history of events and high politics; it is also a history of culture, of the arts and of ideas.

Half the Perfect World is the story of the post-war global artist community that formed on the Greek island of Hydra. It included renowned singer-songwriter Leonard Cohen and his partner Marianne Ihlen, as well as many other artists and writers including the Australian literary couple, Charmian Clift and George Johnston, who fostered this fabled colony. Drawing on many previously unseen letters, manuscripts and diaries, and richly illustrated by the eyewitness photographs of LIFE magazine photojournalist James Burke, Half the Perfect World reveals the private lives and relationships of the Hydra expatriates.

Lemnos & Gallipoli Revealed by Australian historian Jim Claven is an important book exploring the first links between ANZACS and Greeks on Lemnos. The island was the advanced base for the Gallipoli campaign in 1915-16; its harbour of Mudros Bay witnessed the arrival of soldiers as they prepared for the landings on the 25th April. It was home to rest camps and medical facilities, and it was where ANZACS returned to after the evacuation of the Peninsula at the end of the campaign. Lemnos’ war cemeteries would be the final resting place for 148 Australians, among over 1,300 Allied soldiers buried there. The book captures the life of Lemnos then in hundreds of photographs from archives across Australia, overseas and in homes. This is a fitting tribute to the importance of Lemnos in Anzac history.

10. Promised Brides by Panayota Nazou (Australian history and gender studies, non-fiction)
Bilingual Bookshop
Promised Brides by Panayota Nazou is the most systematic research into the promised brides practice of first generation Greek migrants to Australia. The phenomenon occurred mainly between 1950 and 1975, when young Greek women – some of them in their early teens – were being shipped Down Under to be married to men they had never met. They arrived in Australia on “bride ships” to be greeted by men holding flowers. The book builds on oral history, gender studies and cultural-critical theory. Its primary material is drawn from personal testimonies given in the form of interviews to the writer by a number of the brides themselves.