‘I feel as if I’m playing in Athens!’, says Tsitsipas

During the presentation of the ‘Tsitsipas Souvlaki’ that was held at the well-known ‘Stalactites’ restaurant, we had the chance to catch up with the talented athlete who opened up to us about his aspirations in the Australian Open, his views on the Greek community and whether or not he sees himself as an inspiration for young Greeks 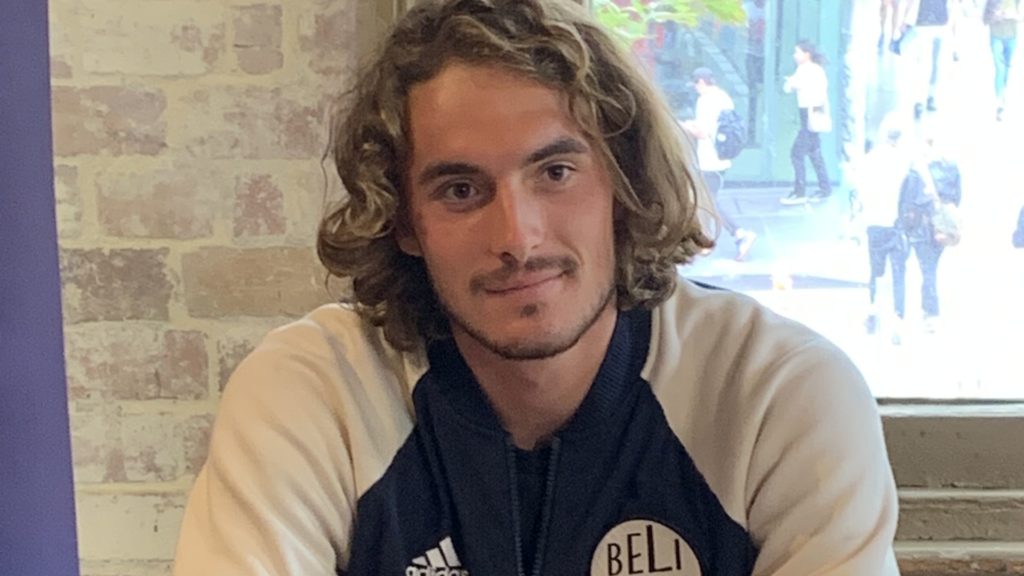 The… godfather of the ‘Tsitsipas-souvlaki’ poses for the cameras. Photo: NEOS KOSMOS

Last Friday afternoon, one of the most famous Greek establishments in Melbourne, the ‘Stalactites’, held an event in order to announce the return of the ‘Tsitsipas-souvlaki’, a fan favourite that made its appearance last year during the Greek athlete’s rise to fame.

According to the announcement, the amount gathered by the sales of this dish will go in support of the bushfire relief and more specifically to CFA and Wildlife Victoria, in a grand gesture by the owners of the restaurant and Stefanos himself to support those in need.

Of course the man who gave his name to this new platter, couldn’t not make an appearance at such an event, highlighting the severity of the situation and how everyone must do what they can in order to help the people who have suffered severe casualties at the hands of the disastrous fires.

Tsitsipas appeared relaxed and calm as he answered the questions of the media, before trying his own hand in the kitchen and preparing one of the souvlakia that he has given his name to.

And, given the reactions of those who tasted it, he didn’t do too bad either! Neos Kosmos was also at the event and spoke to the world number six in regards to the difficult days ahead of him.

– Stefanos, the support of the Greek community towards you will no doubt be great, just as it was last year. Would you like to send a message towards all those people that will stand by your side?

Yes, I would like to thank them for the support they have given me all this time. It’s very important for me to have so many followers that come to the stadiums and show me their love, they give me energy inside the court. But I need to do my part as well, because it’s not the crowd that plays, it’s me. And I need to be very well prepared for the difficult games ahead of me.

– Your first opponent will be the Italian Salvatore Caruso, as shown by the draw. What do you know about him? Have you ‘spied’ on him at all? What do you expect from this game?

I’ve played with him before. I haven’t really seen him a lot when I’m out on tour, but if he’s managed to qualify, then he should be in good condition. I’ll need to be at my top level, no matter who the opponent is. At this level, everything is decided by small details. Focus, passion, and everything else will come on its own.

– How do you feel, coming back to Melbourne? Last year it was a brand new experience for you. Do you feel a bit more familiar this time around?

I feel a lot more familiar! And every time I come here, I feel more in touch with the culture of Australia. I learn more things about this land and I really feel like I’m playing in Athens.

– Do you believe you could turn tennis into a ‘national’ sport for Greece, in the same way that (Nikos) Galis did with basketball during the late 80’s?

I wouldn’t rule it out! If both Maria (Sakkari) and I continue to do what we do in tennis, then the promotion of the sport in our country will definitely grow. It’s all in our hands, to show people what we’re worth and what we can accomplish. The more promotion there is of tennis in Greece, the more people will ask for it.

– And do you think that your influence could prove to be a catalyst in order for more young people in Greece to turn to tennis?

Yes, of course. Both Maria and I have had a great influence so far. Many people send me messages and I know a lot of people who’s kids began to play tennis, something that makes me personally very happy, to know that they chose tennis instead of some other sport. But I think that I still have plenty of room to grow, both as an athlete and to show to the rest of the world that this is something that anyone can accomplish with a lot of hard work and dedication. I just see myself as a good representative of our nation in the sport.