A new executive board has been confirmed for the Greek Orthodox Community of Melbourne and Victoria, who say the promotion of Greek language is their top priority 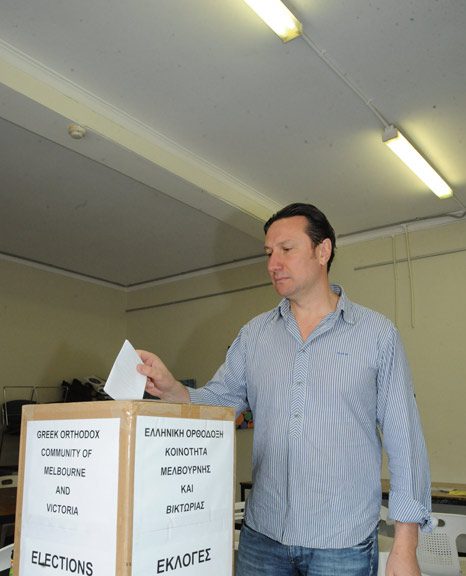 An increase in the number of language schools – with an announcement on this issue to be made within a few weeks – is one of the key priorities for the newly elected board of directors of the Greek Orthodox Community of Melbourne and Victoria (GOCMV), re-elected president Bill Papastergiadis believes.
At a joint meeting of the Electoral Commission with nominees who received the most votes in the election, the Executive Committee was elected and the board of Directors was constituted.
Nominees were accepted unanimously by the board, in an uncontested process that GOCMV has been using for over three years.
“It reflects the unity that exists within the board itself, that we are able to reach these decisions in this way. Whoever was nominated was accepted unanimously,” Mr Papastergiadis told Neos Kosmos.
New members have joined the executive committee, including a new vice president Jim Bossinakis, Nick Parthimos as a new treasurer, Vasso Zangalis, in the position of assistant secretary, and Kostas Tsoumpakos, assistant treasurer. Mr Papastergiadis said new people in the Executive Committee have significant experience in community matters, with all of them being on the board of the community in previous terms.
“Some of these people that have now made their way on to the executive, have already served a term, and having gained experience and proved themselves, they elevated to the executive.
“I’m very proud of the people that are joining us in the executive committee, and I’m excited at the same time that I will be working with them,” Mr Papastergiadis said.
Part of the changes that the GOCMV will be implementing in 2013 is augmenting its teaching program including Ancient Greek, that has overcome all expectations in 2012, and teaching Greek to adults, who aren’t familiar with the language. According to Papastergiadis, major announcements and significant reforms in the education area are expected to be made within a few weeks, particularly in regards to GOCMV afternoon schools’ program.
“We are continuing Ancient Greek classes that we attempt to offer at the VCE level as well.
“We’ll augment our roll in terms of teaching Greek, and in this year we’ll be increasing our program on language significantly. Another announcement in terms of increasing the number of our language schools in significant way is to be made within a few weeks,” Papastergiadis said to Neos Kosmos.
In the meantime, the demolition of the old headquarters of the GOCMV has begun to make way for the new Cultural Tower. Mr Papastergiadis said the external construction is to be begin when the contractors get back from their holidays.