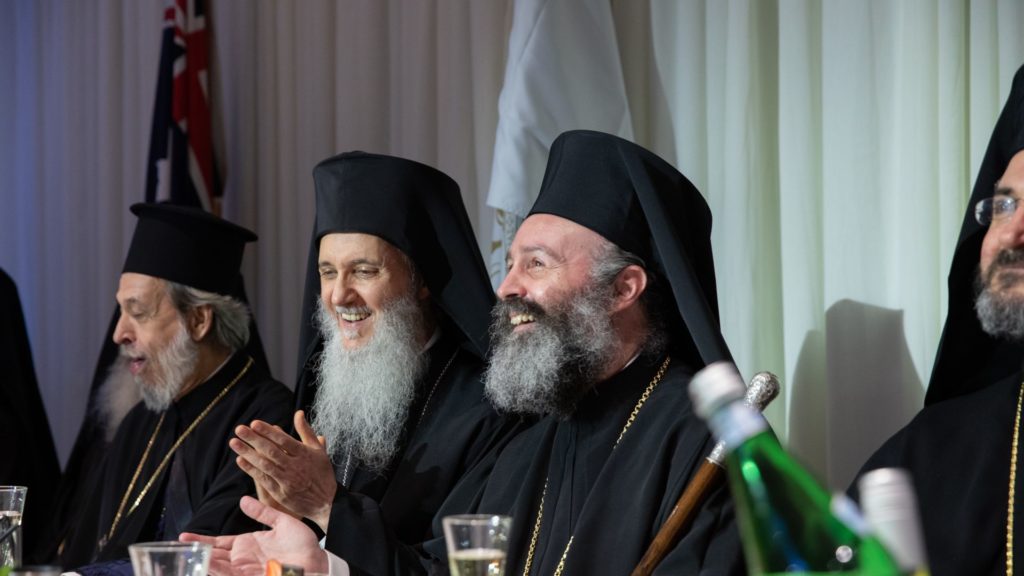 His Eminence Archbishop Makarios has stayed true to his word. Soon after arriving in Australia, he said he would have some big plans to announce on his Name Day, and that was certainly the case.

A celebration was organised at Le Montage in Sydney on Sunday 19 January, with a number of official guests in attendance, including Governor General of New South Wales, Margaret Beazley; Senator Andrew Bragg; and leader of the opposition, Anthony Albanese.

Archbishop Makarios opened his speech by acknowledging the devastating fires that have been ravaging Australia, and the loss of human and animal life, as well as people’s homes. He called on everyone to stand for a minute’s silence in the form of prayer. 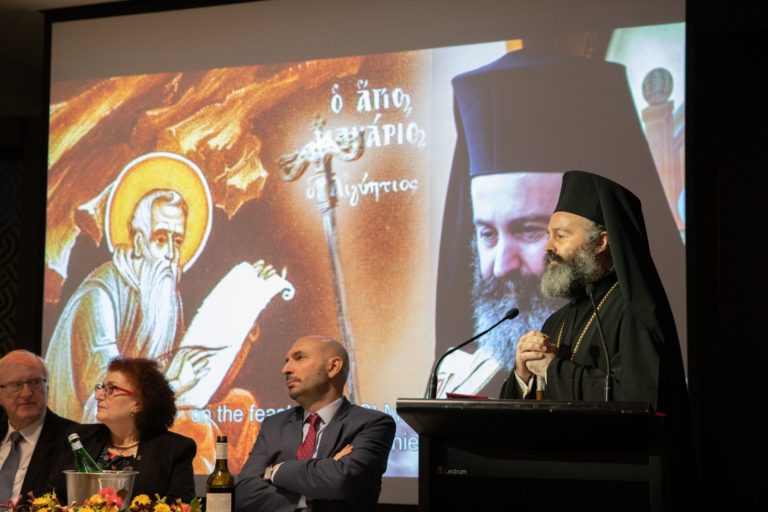 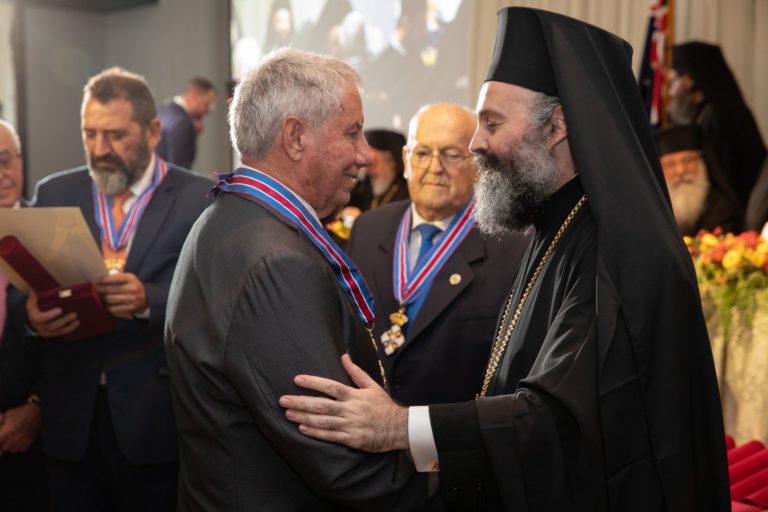 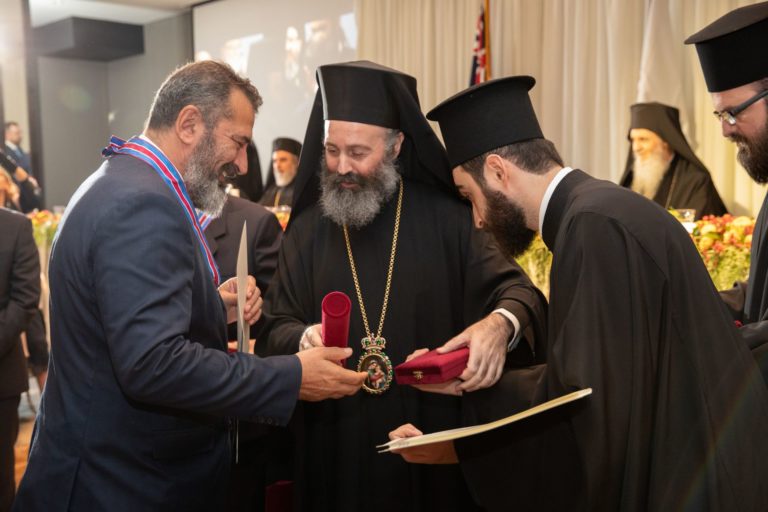 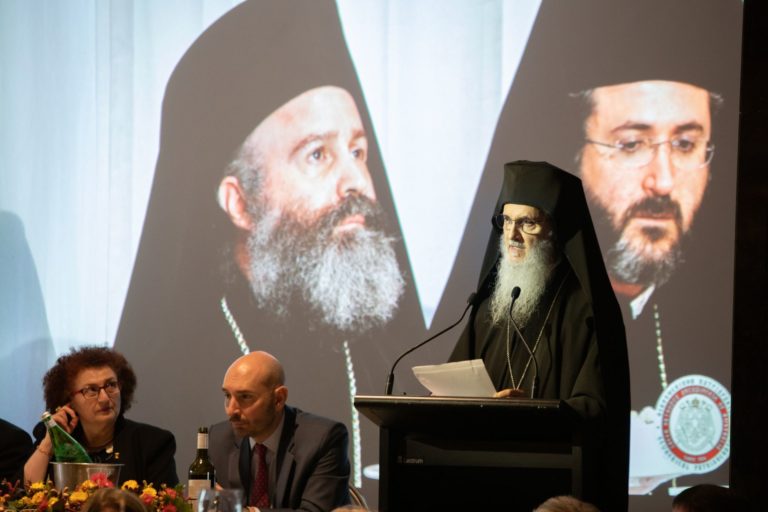 His Eminence then went on to reveal a number of plans and changes the Archdiocese has in store for 2020.

For the upcoming 100 year celebration of the Archdiocese’s foundation in four years, the Archdiocese has established the National Metropolitan Choir of Australia. Led by skilled musical composer Themos Mexis (Elias Mazos), the choir will make its first appearance in Constantinople in 2021 for the 30 year anniversary of Patriarch Bartholomew’s leadership.

Publication on the history of Greeks in Australia & Archdiocese

Two well-known professors of history, Dr George Frazis and Dr Vasilis Adrahtas have been assigned to oversee a publication that will be written on the history of Greeks in Australia and the Archdiocese. It will be published in both English and Greek.

As part of the publication, the Archbishop has commissioned the biographies of past hierarchs Christophoros, Timotheos, Theophilaktos, Ezekiel and Stylianos.

A Clergy-Laity Conference will be held in Sydney next year, which will coincide with the 200 years since the Greek War of Independence (1821- 2021). The general theme will be ‘For Faith and Patrida’.

The Archdiocese has commenced its organisation of a National Youth Conference that will kick off in Melbourne this weekend. The Archbishop said it will give him a chance to get insight on the problems and needs of the youth.

Meanwhile a National Youth Retreat Centre will be built on Bribe Island with 180 beds, where young Orthodox Christians will have the opportunity to come together to learn about Christ and traditions, as well as get to know each other. President of the Committee is Emmanuel Kallinikos. Proceeds from the Archbishop’s Name Day event have been put towards the venture.

The Archbishop spoke once again about plans to combat drug dependency among the community’s youth with the establishment of drug rehabilitation centres in Sydney and Melbourne under the name ELPIS. So far an ABN number has been obtained, and a constitution has been written up.

In Melbourne, Nikolas Andronicus has responded to the call, offering his property as well as $1 million towards its establishment. To honour his contribution, a chapel will be built dedicated to St Nicholas.

In Sydney, the responsibility of the centre has been undertaken by clergyman Fr Angelos Aliferakis.

St Basil’s of Sydney has donated a parcel of land in the Lakemba area to house students of St Andrew’s Theological College during their years of study.

The undertaking will cost over $10 million, which will be made possible thanks to the dedication of St Basil’s Committee President James Jordan and its members, as well as CEO Fr Nicholas Stavropoulos.

When the Theological College moves to its own space, there are plans to renovate the Archdiocese, which will be overseen by architects Christos Tsioulos and Angelo Kandalepas. The renovations will incorporate some small changes to the Cathedral’s interior also.

Works are expected to be complete by 2024 to mark the 100-year anniversary of the founding of the Archdiocese.

School of Byzantine Music of the Archdiocese & female chanters

The School of Byzantine Music of the Archdiocese was founded last September with a chair at Northcote and under the supervision of Archimandrite Evmenios Vassilopoulos, with the aim that the ecclesiastical musical tradition be carried on.

Three chanters from Melbourne, Vaios Anastasopoulos, Vasileos Kougioumitzis and Lambros Vlahandonis under the direction of the Archbishop, have formed the steering Committee for the founding of the school and will use contemporary technology to launch their lessons online, giving access to anyone interested in learning across the country.

His Eminence also gave his blessing for women to be included in the chanting boxes.

The General Director is Anastasopoulos; Director of the subcommittee in Sydney is Vasileos Psillakos; and Director in Adelaide is Nikolas Zisopoulos. Others will soon be assigned in the Archdiocesan districts of Perth, Brisbane and Melbourne.

To cater to growing number of community members who do not speak Greek, English-speaking parishes are being established.

In Perth, the parish of the Pantocrator has already been set up under the care of Fr Emmanuel Stamatiou, with plans to set up the parish of St Marina in Sydney.

Monastery outside of Melbourne

The Archdiocese has been gifted 100 acres of land by Onofrios Gorozidis outside of Melbourne. If approval is received, a monastery for monks will be established in honour of Panaghia.

The Castellorizian Brotherhood donated their nursing home to the Archdiocese. Valued at $15 million, St Basil’s has undertaken the management of this facility.

Meanwhile four new centres are being built to care for the Third Age: one in Perth, Adelaide, Canberra and Sydney.