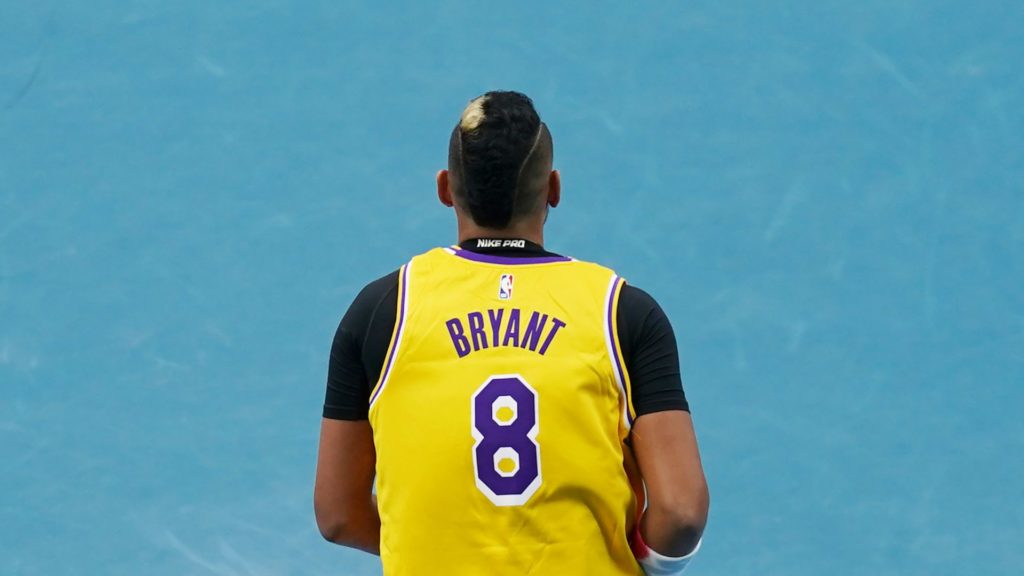 Nick Kyrgios pays tribute to the late Kobe Bryant before the start of the game against Rafael Nadal for the fourth round of the Australian Open. Photo: AAP/Michael Dodge

Nick Kyrgios’ journey in the Australian Open is over, after falling to the great Rafael Nadal 3-6, 6-3, 6-7 (6), 6-7 (4), in a game that lasted over four hours and had fans both at Rod Laver Arena and at home biting their nails in anticipation of what would happen next.

The Spanish tennis legend began the game looking confident as always and attempted to assert his dominance from early on. He made the break in the third game and went on to win the first set 3-6.

But just when everyone thought that this was going to be another walk in the park for the Spaniard, Kyrgios responded in the same style.

His powerful serve proved too difficult, even for a player of Nadal’s calibre, and after finally breaking on the first game of the second set (which almost lasted 10 minutes!), he gained a necessary boost in morale to go on and finish the set 6-3 to bring things level.

Kyrgios appeared a changed player, making more mature choices and having a lot of confidence in his game, yet on the other side of the court Nadal’s composure couldn’t be shaken.

This lead to a third set during which neither player would yield, forcing a tie-breaker, with the former Grand Slam champion eventually emerging as winner 8-6 thanks to his calm style of play.

The loss of the third set didn’t seem to affect Kyrgios, however (despite the destruction of a racket), who kept fighting in the fourth and giving questions to Nadal. But the Spaniard kept finding all the right answers.

Once again, the tie-breaker was called to make the difference between the two, and yet again it was Nadal who came out on top, with Kyrgios running low on energy.

Despite his loss, the Greek Australian will depart the tournament looking a lot better than when he started, as he showed signs of growth in his game and a lot of potential for the future.

Meanwhile, before the start of the game, the young Greek Australian appeared in an LA Lakers jersey with the number 8 and the name Bryant on the back.

He sat on the bench and couldn’t hold back his tears, obviously affected by the tragic news of the NBA legend’s passing that was made known early on Monday.

During the post-match press conference, the 24-year-old said that Bryant’s death motivated him to play:

“If you look at the things he stood for, what he wanted to be remembered by, I felt like, if anything, it helped me (last night),” said Kyrgios.

“When I was down a break in the fourth (set), I was definitely thinking about it. I fought back.”