Cypriot-Australian poet Koraly Dimitriadis, has been awarded a $10,000 ArtStart grant for 2013 to establish her career as a writer 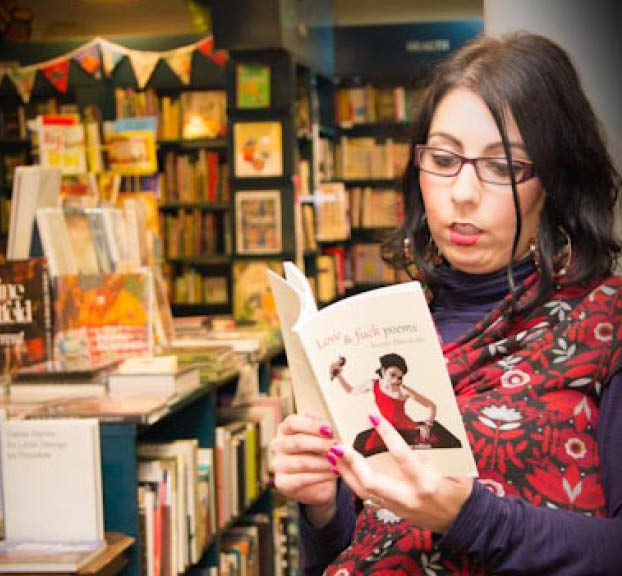 Cypriot-Australian poet Koraly Dimitriadis, has been awarded a $10,000 ArtStart grant for 2013 to establish her career as a writer.
“I couldn’t be happier about the grant,” said Dimitriadis. “I have been true to myself and given a voice to women within my culture. I feel like this is only the beginning.”
Dimitraidis – who is currently the resident poet at Brunswick Street Bookstore – will use the funds to create four film clips of her poetry, one being ‘Wog’ and the other ‘Love according to wogs’ which may include her mentor, award winning novelist, Christos Tsiolkas. Dimitriadis will also use the funds to travel to Cyprus to work with a translator to translate some of her poems into Greek.
The poet was awarded her bookshop residency through Australian Poetry’s Cafe Poets Program in early 2012 and will continue the residency into 2013.
“We are very happy to have Koraly in our store,” said Jessica Rae from Brunswick Street Bookstore.
“Both the friendly poetess with her sensible glasses, tapping thoughtfully on her laptop; and the dynamic performance poet with her throwing stars of resolute words. Koraly has brought a playful and lively element to our day-to-day business, chatting with customers, reciting her insistent verse, and inciting admirers to pen her a few thoughts of their own.”
Dimitriadis self-published her poetry chapbook-zine, Love and Fuck Poems, in mid 2011 only to have it repeatedly sell-out at bookshops. This led her to republish it as a ‘Deluxe Edition’ book with Outside The Box Press. The premise of the work is sexual repression within migrant cultures. With sales escalating, Pan Macmillan’s digital-only imprint, Momentum Books, have offered Dimitriadis an e-book publishing contract, which will see the e-book available in the first half of 2013. Dimitriadis is also working on a follow up to the book, a trilogy told through verse and short story called Good Greek Girls.
In an interview with Neos Kosmos last year, the poet said her work is “about being honest with myself, putting my art out there and saying I don’t want to speak for women in my culture. But I want to also give a voice to women within my culture to say it’s okay to be honest; it’s okay to be different; it’s okay to want to explore your sexuality. Because of course within our culture as women we aren’t encouraged to do that, but men are”.
The 3CR radio presenter and widely published writer will also use the funds to set up a workspace to finish her novel Misplaced which explores the unique hybrid that is the second-generation of migrants.
She has received mentorship for this novel from Christos Tsiolkas and Anna Kannava.
Love and Fuck Poems is a feminist critique on the conservative expectations that migrant families often place on their daughters. It is a snapshot in time, of exploding out of repression and marriage only to emerge sexually confused and alone.
For more information visit http://koralydimitriadis.com/