The battle of the yellows takes place in Thessaloniki, with Michael Oenning’s side still maintaining hopes of finding themselves a better position for the upcoming playoffs 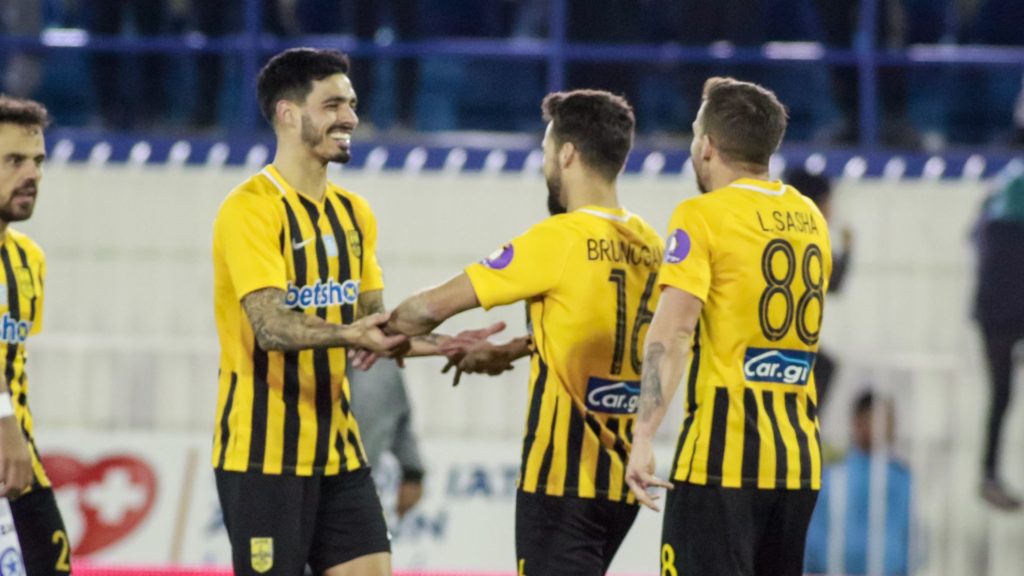 Aris will hope for a win against AEK and a Panathinaikos loss on Sunday. Photo: Eurokinssi

Just three turns away from the end of the regular season and all teams in the Greek Super League are putting in a final attempt to go as high up on the ladder as they possibly can.

This can be said for Thessaloniki side Aris, who have had a bit of a mixed season so far, yet would like to end in on a high note.

To that end, they will take on the black-and-yellows of Athens, AEK, who are still in good spirits after their hard-earned victory against Panathinaikos last Sunday.

The home side will most certainly be looking for a win which, combined with a potential home loss by the greens at the hands of Panetolikos, could give them a shot of reaching fourth place, which at this point is all they have left to fight for in the league.

On the other hand, the visitors have already sealed third place and are too far to become a threat for PAOK, who is second, so the game has no real meaning for them when it comes to the points.

Yet by no means will their die-hard fans settle for a loss, especially with their team having earned only one win in the games that are considered derbies in Greece so far in the season.

Aris manager Michael Oenning could be without his main attacking force of Brown Ideye and Martin Tonso, while his Italian counterpart at AEK Massimo Carrera is facing the difficult decision of leaving out the still troubled by injuries top scorer of his team Nelson Oliveira for last Sunday’s hero Sergio Araujo.

Meanwhile, the two clubs vying for top place in the league, Olympiacos and PAOK, face relatively easy challenges, one week before the mother of all battles between the two of them that is more than likely to determine who will finish at first place for the regular season.

The reds host bottom-of-the-table Panionios, while the champions will take on AEL at Larissa in what could prove a tricky contest should they not give it the appropriate amount of attention.

Both teams will want to clean up early in order to go into maintenance mode for next week’s battle, with Olympiacos having the additional challenge of Arsenal and the Europa League next Thursday.

Finally, in another highly attractive fixture, OFI will host Atromitos in Crete, with the visitors having one last chance of breaking into the playoff positions, as they currently sit in the eighth spot with two points less than their opponents, who are sixth and equal on points with Xanthi (but with a better goal advantage).

It’s worth mentioning that only the top six teams of the Super League advance into the play-offs, while teams ranked from ninth to fourteenth will enter a play-out round to determine relegation to the Super League 2.