“The children now love luxury; they show disrespect for elders and love chatter in place of exercise. Children are tyrants, not servants of the households. They no longer rise when their elders enter the room. They contradict their parents, chatter before company, gobble up dainties at the table, cross their legs, and tyrannize over their teachers.”

A free barbecue at Red Hill during the Theophania Festival, a permanent mural in Melbourne CBD, to be created by international artists PichiAvo and a Greek history virtual reality programme for the HTC VIVE device that could be made available at the Antipodes Festival, were some of the possible activities mooted at the recent well attended Greek Youth Summit in Melbourne, which took place at the Greek Centre.

A few days before, a prominent member of a Greek community organisation asked me: “What are we going to do about the νεολαία? What do you κωλόπαιδα want? You expect everything and contribute nothing. You appreciate nothing and know only how to take, not to give. You are a problem that we need to solve.”

I have always been fascinated by the way the youth have proved to be a perennial problem for the organised Greek community. Despite the rhetoric, save for a perpetuation of existing structures which are antiquated and bear no relation to the complex synthesis of the Greek-Australian social fabric, no one has ever been able to articulate a coherent vision for the youth or a framework for their integration within the community.

Known collectively as the «Νεολαία», this is a body of people that have existed largely outside the imagination and perspective of the dominant generations. Having once been part of the «νεολαία,» and still being considered as one by active octogenarian members of the Greek community, I have watched as “youth committees” have folded one by one over the decades, either through lack of interest or as a result of bitter recrimination, politicking and manipulation by elders who saw them as puppets for their own nefarious designs. While in the Eighties and Nineties we were enjoined to attend dinner dance after dinner dance in nauseating succession in order to pay off loans secured over brotherhood buildings, so these could apparently be bequeathed to the «νεολαία». Our community is now comprised of defunct brotherhoods, who with a few notable exceptions, devoid of youth, struggle to fill their empty halls and are engaged in Mexican stand-offs with their members, where all seek to sell their real assets but accuse each other of intending to misappropriate the proceeds, in reality vying with each other over liquidation rights.

READ MORE: Pronia is on a mission to support newly arrived young Greeks In my spare time, I like to collect retro invitations to brotherhood dinner dances that include the phrase: «Θα έχουμε ντίσκο για την νεολαία,» reminiscing over those times when, resplendent in black pants and white socks, at each such χορό, we would be relegated to the table next to the toilets, furthest away from everyone else. As our inebriated and by this time, flatulent elders would pass us, unbuckling their belts in preparation for their ablutions, they would invariably ask: «Τι κάνει η νεολαία;» and we would roll our eyes in frustration. In those days and up to the present, the only elder-sanctioned sphere of youth involvement was a dance group, to be trundled out in traditional regalia for performances that redounded to the greater glory of the σύλλογο, and returned safely into obscurity once the performance was over. Sadly, the antagonistic and gerontocratic social culture of these brotherhoods, which dominated Greek community life, and their narrowness of perspective, generally limited to dances, barbecues, and these days, subsidised group holidays, precluded substantive participation of the youth, and save in the notable cases of Pontiaki Estia and the Pancretan Association, the youth learned next to nothing about the complex tapestry of folklore, history and tradition that characterised their ancestral regions, nor were they assisted to explore it, revel in it, or identify in it. In many cases, the bile, viciousness and anti-social behaviour of their elders turned them off the Greek community altogether.

Consequently, the enthusiasm, capabilities and energy of “the youth” have not been harnessed anywhere near to their full potential. Even in these “enlightened times” Greek youth are generally active outside the confines, or at best, in the case of NUGAS, which has undergone one of its periodic remarkable reinventions of late, on the margins of the organised Greek community. Structures do not seem to exist, even within large organisations that purport to represent all Greek-Australians to incorporate Greek youth, or to channel its endeavours, into that organised community. Quite possibly, what we are therefore witnessing is the emerging obsolescence of the institutions which have defined our existence as an entity, for the past one hundred years.

The topics discussed at the recent Greek Youth Summit merely serve to reinforce this phenomenon of alienation and separateness from the rest of the community. It comes as no coincidence, therefore, that the first topic of the successful evening addressed “the stigma that may come with being a member of the Greek Australian community and what could be done to deal with this issue.”

The fact that discussions are being held by the youth in which they consider that there is a stigma in belonging to the Greek-Australian community and that this is an issue, is of profound significance and should not escape our attention. There is, a great deal of unaddressed historical trauma involved in growing up within the organised Greek-Australian community and this is a trauma that leads to identity complexes that can be inherited down the generations. The organisers of the Greek Youth Summit are to be admired for their perspicacity and their courage in finally identifying and addressing this impediment to youth integration within our communal structures.

Correctly recognising the failure of the elders to pass on the corpus of lore relevant to the Greek identity to their offspring, the panellists of the Greek Youth Summit, examined ways to reach out to their peers in order to re-ignite an engagement with Greek culture. Obviously, they value this heritage and its continuity. What exactly that Greek culture is, for them, remained undefined, as it should be, for as a concept, it defies stereotypisation and exhausts superlatives. Any such conception however, must take cognisance of the unique culture we have created for ourselves here, and it is for the emerging youth to interrogate that culture, deconstruct it, and mould it accordingly. The complex, multi-faceted identity of today’s Greek-Australian youth, coloured by gender, sexuality, other ethnic backgrounds and socio-economic class, is something that was rightfully stressed at the Summit and which has largely been ignored by the previous generations. As one of the organisers charmingly put it: “You don’t have to be hardcore to be Greek.” The term hardcore also remained undefined at the Summit.

In this way, the ensuing discussion of ways to bridge over the past, find points of contact and establish a modus vivendi with the older generation of Greek-Australians who still dominate the structures of our community provided a useful analysis of the ontopathology of the Greek-Australian youth: existing on the margins of the dominant structures, acting generally autonomously and without reference to these but still unable to conceptually emancipate themselves from the organisational superstructure that in many ways continues to define their identity. What the organisers of the Summit aspire to, is, at least, co-operation, so that access to the social and other networks of the first generation can be granted to them, in the furtherance of their own activities. 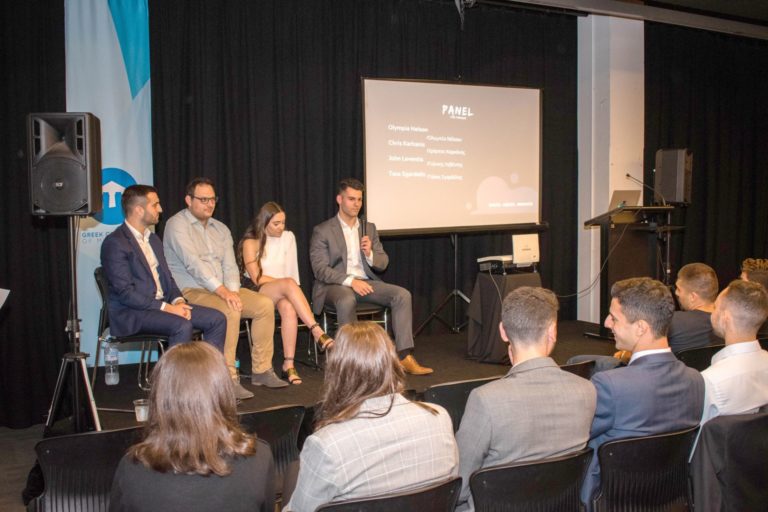 Whether or not we ever manage to conceive of the much coveted, integrated inter-generational approach to our community and identity, the manner of negotiating the Greek community, the nature of articulation of the apodemic discourse by the youth, which reflect broader societal trends and tropes of expression, as exemplified in the Greek Youth Summit, deserve intense study.

What the Greek Youth Summit, an event generated by concerned youth without the instigation or direction of their elders, indicates, is that the Greek-Australian youth continue to identify, in a non-prescriptive way, with the community that has evolved here over a century. It is for them to formulate their own narratives and to engage with communal institutions in a manner in which satisfies their own objectives and preoccupations, if the Greek discourse is going to be of continuous relevance to multicultural Australia in the future. The elder members of the community should not consider this to be a “problem.” Nor can they be expected to plan for or to address the needs of a generation that is multi-skilled and integrated within the broader social fabric. That generation is more than capable of, and must do this for themselves. Their main challenge, considering their freshness, energy and diversity is their transience: theirs is a stage of life that soon passes, meaning that they are unable to form permanent institutional cultures with traditions of their own and each generation thus inhabits an ahistorical, decontextualised space, in which previous wisdom and lore does not accumulate and there is general ignorance of previous youth experience. This makes their integration within a large framework of co-operation all the more valuable. What our community must be able to do, is to nurture, inspire and support them, while they, in the words of the Shadows: “…live, love
While the flame is strong,/ For [they] won’t be the young ones very long…”