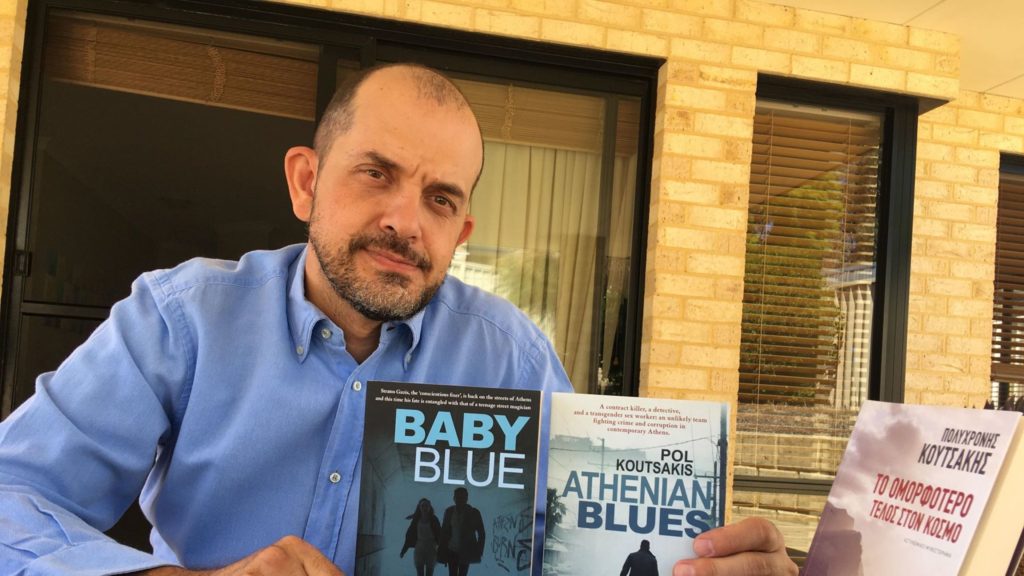 Dr Pol Koutsakis with his two novels ‘Athenian Blues’ and ‘Baby Blue’ that have been translated into English and his Greek bestseller which came out last year, ‘The Most Beautiful End in the World’. Photo: Supplied.

Perhaps one of the dividends of the Greek version of the Global Financial Crisis has been the revitalization of the crime noir novels that have drawn breath from the gritty realities of life in the harsh streets of post crash Athens.

Greek-based foreign writers like American Jeffrey Siger and Paul Johnston have done well with setting their crime novels in the mean streets of a post-crash Greece.

On the Greek end, Sergio Gakas is a noteworthy name with his book Ashes but Dr Polychronis (Pol) Koutsakis, now based in Perth, has received critical praise for his novels Athenian Blues and Baby Blue, which feature the “ethical hitman” Stratos Gazis. The books have been published in English, and the word is spreading.

“Foreign writers are doing a good job setting their novels in Greece. They are good, but I think that Greek crimewriters have a better feel for the country, even if the foreign crimewriters have lived in Greece for a few years,” said Dr Koutsakis who has a PhD in Electrical and Computer Engineering.

“It is why I am still reticent to write a novel set in Australia because it is quite different to have been brought up in a country and really understand its vibes, rather than writing as a foreigner with a completely different background and needing a few years to understand how things work,” said Dr Koutsakis.

“I think it will take me a bit more time to feel at ease with the Australian environment before I can incorporate it in a novel.”

In total, he has written 13 novels and numerous plays – one of which, The Rotation System, won the Greece’s National Award for Playwriting in 2007. His plays have been performed and have won awards in the US, Britain and Greece.

He has accomplished this while holding down a demanding job in its own right as a a senior lecturer Information Technology at Murdoch University in Perth.

Being chairman of the Master’s programme adds an administrative dimension to his teaching and research roles. So the father of two young children, has a pretty busy working day.

“I am working on a third Stratos Gazis novel. I am doing my academic work, I am writing books in Greek and try to translate them into English. I am also writing for the theatre, so I am juggling with a few balls in the air,” he says.

“I try to write for two hours minimum every day – either at the start or at the end of the day.”

His first book came out when he was 24 and when he held it in his hands he knew that he would continue to write for the rest of his life.

“When I had written my first two or three books I had an idea for a play. I had read and seen hundreds of plays by that time. The play was staged and was well received. Another play called Bogey was translated and sent to a publishing house in Canada. This was played in several theatre festivals in England. That got me started and I thought, ‘I can keep doing this.'”

His latest play, Replay, is a first for him as it is his first venture into romantic comedy.

“Replay is the first time that I have written a pure comedy because all my plays are either dramas or comedy dramas.

Because of his university commitments Dr Koutsakis has not been able to promote his literary work since coming to Australia in 2016.

“I have had two events where I have talked about my work. One was a launch for my novel with the very good Australian crimewriter David Whish Wilson who is the head of the Creative Writing Department at Curtin University where he spoke about my novels and presented them to the audience.

“The other was at the Mandurah Readers’ and Writers’ Festival. Writing WA is an important writing organisation in Western Australia and they wrote an incredible review of my work.”

Dr Koutsakis graduated from Patras University with a degree in electrical engineering and completed a PhD in computer engineering from the Technical University of Crete in 2002. He also lectured there 2003 to 2006.

He then went to Canada to work as an Assistant Professor in the Electrical and Computer Engineering Department at McMaster University near Toronto.

When his wife became pregnant with their first child they decided to return to Crete where Dr Koutsakis worked as a professor in his old department in Chania in 2009.

“But then, as you know, things went really downhill for the country. We experienced the whole thing and every year was worse than the previous one.”

The family decided to emigrate and this time they opted for Australia having heard good reports about the country.

“The first job I applied was the one I took. I had heard it was a good place for a family to grow up, he said.

Crime writing is a genre Mr Koutsakis prefers over straight action plots. American writers like Raymond Chandler, Ross McDonald and Robert B Parker are what drew him to the genre. He also admires the work of the current crop of writers like Dennis Lehane and Robert Crais.

“In crime and noir novels, you get to talk about life and society from which the characters are drawn. Of course you need a great plot because without it the reader will yawn and put the book down. While thriller novels are great they are basically about plotting the next thrill, what is going to happen to the character, the next big adventure and the next bad guy the hero has to put down.

“Crime and thrillers are neighbouring genres. And I am all for anything that increases the reading audience. Whatever makes someone go to a library or bookshop to pick up a book is fantastic.”

○The Stratos Gazis novels, Athenian Blues and Baby Blue are available in English can be found at Dymocks bookshops and online through Amazon in paperback or on Kindle.