‘Save Greece and Europe from Turkish invasion’, a petition to Donald Trump 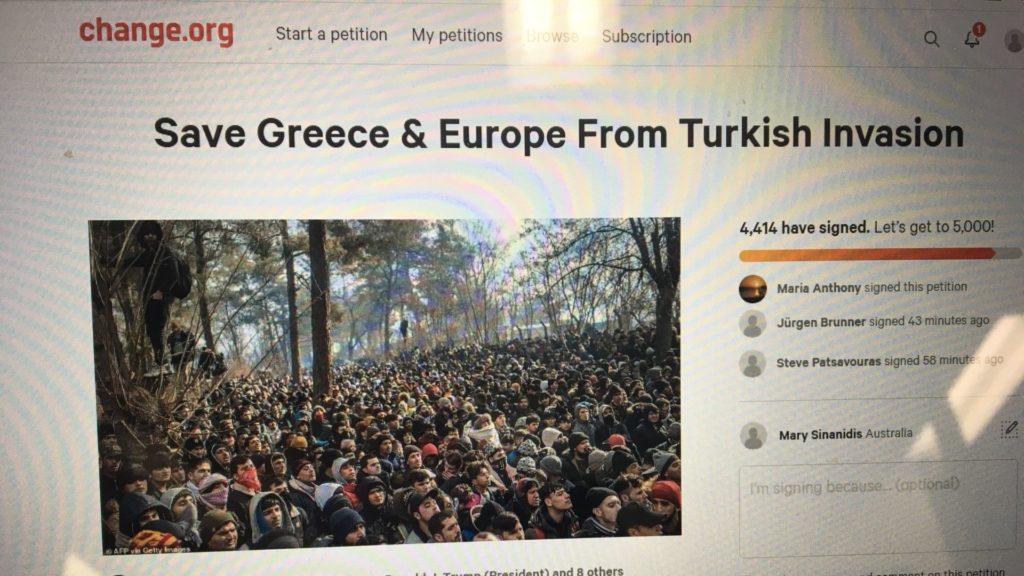 There were more than 4,400 signatures gathered by the petition at the time of publication. Photo: NK

A petition has been started under the name of Kostas Patriotis on change.org, titled ‘Save Greece and Europe from Turkish invasion’. There were nearly 5,000 signatures by Wednesday afternoon. The petition is addressed to a number of officials, including US President Donald Trump, UK Parliament, the United Nations Security Council, Papa Francesco Bergoglio, Greek Parliament and the Greek Orthodox Church.

The petition reads as follows:

Turkish President Erdogan, a known Islamic fanatic, has opened his borders to flood Greece and Europe with fighting age males.

On the ground, many Turkish migrants have said on camera they were released from prison and provided Turkish bus rides to the border of northern Greece.

Smoke bombs and tear gas thrown at the Greek police bare the label of Turkish origin.

Turkey has reported over 74,000 migrants were set free and guided on path to Greece’s border.

On local Greek news we have seen these migrants throwing their children at Greek police to gain propagandist sympathy. In one instance, three men held a child over a smokey fire in order to inhale smoke while banging on her back to induce tears and distress for media cameras.

Greece and Europe set the path for a civilised world thousands of years ago so we may enjoy much of  the rich traits we share intellectually and culturally on this planet. Civility being #1.

Unleashing these people into the neighbourhoods of Europe will cause crime to soar, locals to flee – making way for invasion through migration.

The people flooding Europe through Greece’s border are not people in need – they are people sent to destabilise Europe.

To The United States of America, United Kingdom, United Nations, and all Christian Leaders… Help protect everything that is civilised, for we will have no reason to live in a barbaric chaotic world.

“The only thing necessary for the triumph of evil is for good men to do nothing.”― Edmund Burke

Help protect Europe by helping Greece at the border.

READ MORE: ‘We stand by Greece and support the country’

Neos Kosmos welcomes Letters to the Editor and opinion pieces. The views and opinions expressed in these are those of the authors and do not necessarily reflect the official position of the publisher. We reserve the right to edit contributions. All letters must be accompanied by the contact details of the authors. Send these to mary@neoskosmos.com.au or mail them to PO Box 6068, Hawthorn West, Victoria 3122.