Olympic flame begins its journey from Greece to Tokyo 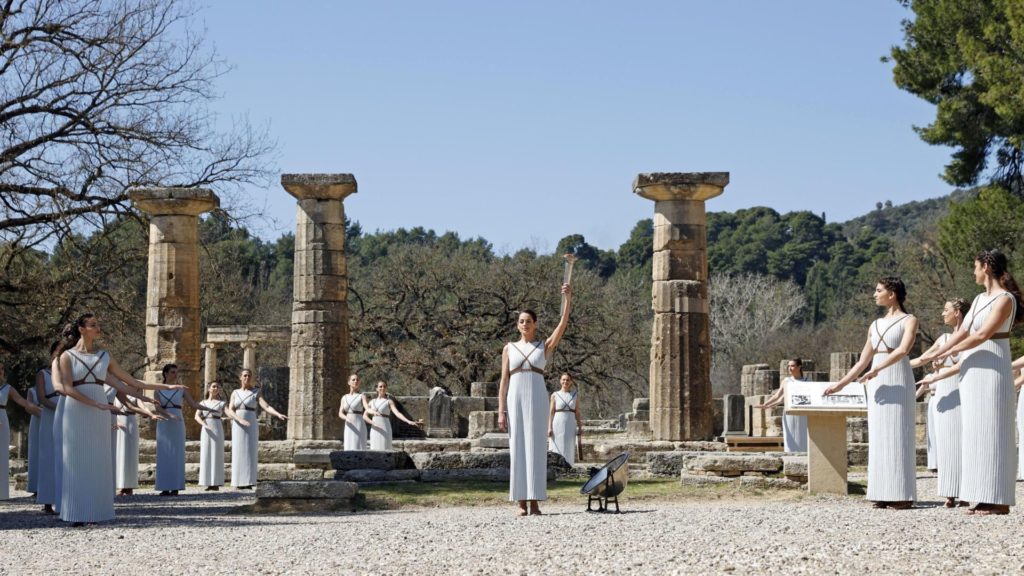 The Olympic Flame for Tokyo Olympic Games, began its journey in Ancient Olympia, sending glimpses of optimism around the world for better days.

The Olympic Flame was lit in the Temple of Hera by the sun rays with the High Priestess Xanthi Georgiou passing the Flame to the Olympic champion in shooting Anna Korakaki, who is the first ever female torchbearer to start the torch relay.

The ritual was inspired by the choreographer Artemis Ignatiou while the music composition was inspired by Yiannis Psimadas and the costumes were designed by Eleni Kyriacou.

HOC President and IOC member for Greece, Spyros Capralos, addressed the gathering of officials in a ceremony devoid of public presence due to coronavirus fears. “We are gathered today, in Olympia, the cradle of Olympism, the place where thoughts are deep and emotions are high, to light the Flame which will illuminate the whole world,” he said. “This Flame is a symbol of the traditions and values of the Olympic movement: friendship, excellence, solidarity and respect. The Torchbearers will convey the message of peace and that sport makes our world a better place. The Olympic Games bring humanity together, in a truly peaceful, worldwide event. In this Ceremony, most regretfully, we had to downsize turnout to protect public health. However, the live broadcast and the beautiful images from the historic location where the Olympic Games began, capture in their entirety the Olympic spirit.”

International Olympic Committee President Thomas Bach thanked the Greek people for their “precious gift to humankind” and spoke of the direct connection between modern Greece and the noble heritage of the Olympic spirit. “We are especially grateful that you made today’s ceremony possible even under difficult circumstances. This demonstrates once more our commitment to the success of the Olympic Games Tokyo 2020. We are strengthened in this commitment also by the many authorities and sports organisations who are already now taking so many measures to contain the spread of the coronavirus 19 weeks before the Opening Ceremony,” he said.

READ MORE: Sporting events in Greece affected by the coronavirus

Coronavirus also dominated the thoughts of TOCOG acting President Toshiako Endo. “Currently, the novel coronavirus outbreak known as Covid-19 continues to spread across the world every day,” he said. “All nations will keep taking the best effort together until the coronavirus is all over. We are very grateful that all concerned people in Greece has taken all possible and appropriate measures for the lighting ceremony and following events. We, the Tokyo 2020 Organising Committee, will achieve the success of the Olympic Games well prepared in close cooperation with the IOC, the government of Japan, and the Tokyo metropolitan government.”

Mr Endo said that the last Games in Tokyo were in 1964. “Looking back, Tokyo had the honour of becoming the first city in Asia to host the Olympic Games. In accordance with the Olympic Charter, the Olympic flame served as a symbol of peace, and the Olympic flame visited several Asian cities before finally landing in Japan,” he said. “The Olympic Torch Relay travelled all over Japan serving to remind people just how precious peace is, and bringing the people of Japan hope for tomorrow and confidence in the future.”

Olympia’s Mayor George Georgopoulos said that the message of Olympia is still valid and applicable to the modern Olympic Games. “It demands moderation and determines the limits of exaggeration and occasionally of hubris,” he said. “Truce is no longer imposed by the trumpet calls of the truce-bearer heralds. However, one can seek in the Olympic institutions actions and initiatives in the major issues of our times, the refugee issue, climate change, local and regional conflicts”.

The torch relay of the first day travelled through Amaliada, ancient Ilida, Pyrgos, Zacharo, Pylos, Messini, and headed to Kalamata.