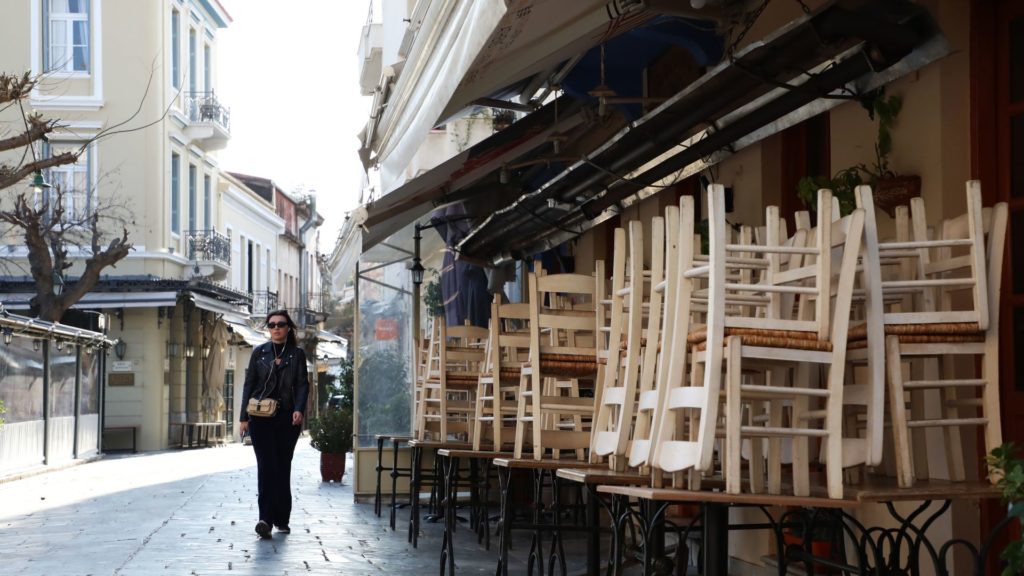 A lone pedestrian walks past closed shops and restaurant on a usually busy Athens street on Sunday, March 15. Government measures aimed at curbing the spread of Covid-19 have led to people staying at home. Photo: AAP

In Mykonos, the popular tourist island appeared deserted over the weekend with the residents heeding government measures to close bars and restaurants and to stay at home.

There have been no confirmed cases of Covid-19 on the island but residents fear the pandemic will have serious repercussions on the tourism industry. A fear that was reflected in other parts of Greece as the containment measures against the spread of the virus took its toll on the once bustling streets of the nation’s cities and towns.

Greek authorities have shut schools, universities, museums, theaters and all sport events. On Sunday authorities announced that they would imposecrowd controls on supermarkets from Monday.The measures were aimed at preventing overcrowding and ultimately limiting the spread of the Covid-19 virus.

Health Ministry spokesperson Sotiris Tsiodras said  51 patients were in hospital, eight of whom were in in intensive care at hospitals in Athens, Thessaloniki and Patras. Ten have been discharged, he said.

On Sunday, a patient at the AHEPA hospital in Thessaloniki died from the Covid-19 virus. The patient was the fourth Covid-19  fatality. The total number of Covid-19 cases in Greece jumped to 331 after 103 new cases were recorded on Sunday.

The latest victim was a 53-year-old man who was working at a hospital in the northern Greek town of Kastoria. He was the youngest fatality to date, but as with the three victims before him, he suffered from a serious underlying disease.