13 coronavirus cases have been identified, including a school and a Melbourne abattoir 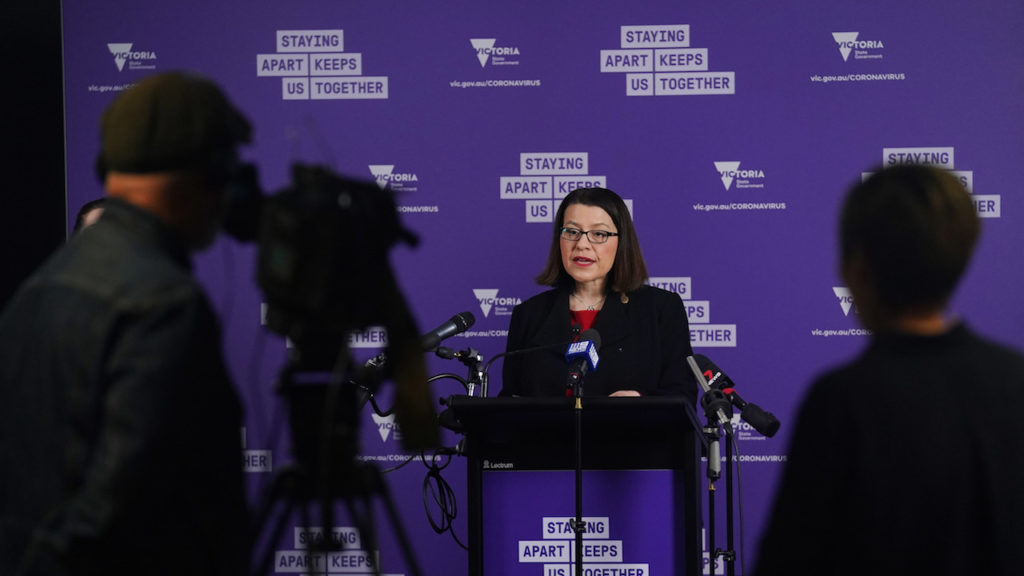 Victorian Minister for Health Jenny Mikakos speaks to the media during a press conference in Melbourne. Photo: AP via AAP/Michael Dodge

As a result, Meadowglen Primary School in Epping will be closed from Monday to Wednesday.

The school in the northern suburbs of Melbourne has been temporarily shut down due to a teacher having tested positive for coronavirus. Health authorities are investigating how the teacher contracted the virus while the Department of Health and Human Services conducts facilities cleaning and contact tracing.

“Parents, carers and staff were contacted by the school to let them know a staff member had tested positive,” Ms Mikakos said.

“Students who need to attend in person and have no other option … will be supported to be able to attend a neighbouring school.”

The Minister said that given 97 per cent of Victorian state school students were studying from home the potential for transmission was limited and students who were at the school but not in the teacher’s classroom may be able to go straight to a neighbouring school.

Update: According to a statement issued by he principal of Meadowglen, Loretta Piazza on Melbourne radio station 3AW the infected staff member was a “brilliant music teacher in good health”.

“I spoke to him this morning, he’s doing just fine,” she said, explaining that he had been at the school recording videos for students learning from home and had not come into contact with any students during the days he had attended the school’s music room and staffroom.

Contact tracing had only identified two other teachers as close contacts who needed to undergo a fortnight of self-quarantine.

“The good news is that no adults, no staff at our school are showing any symptoms either. He had been part of a fairly big cluster early on (…) I believe he had attempted to get tested at the time, but was unable to due to limits on testing criteria.”

Hours before the new potential coronavirus cluster Federal Education Minister Dan Tehan had accused Daniel Andrews of taking a “sledgehammer to the state’s education sector”, urging parents to ignore that state’s Premier and instead follow medical experts and send their children back to school.

“The question to Daniel Andrews, sure, take a sledgehammer to defeating coronavirus, but why are you taking a sledgehammer also to the state education system?” Mr Tehan said.

Meanwhile, six of the new cases relate to the cluster at an abattoir in Melbourne’s outer suburbs, in addition to the eight previously identified at the facility.

Three cases were returned overseas travellers in quarantine, one was a close contact of a past case and the other three were identified through the Government’s testing blitz.

“Anyone who believes they might have been exposed to the virus should call the coronavirus hotline or attend a screening clinic and self-isolate.”

Also read: We asked experts for their opinion on the COVIDSafe App: Is it a game-changer?