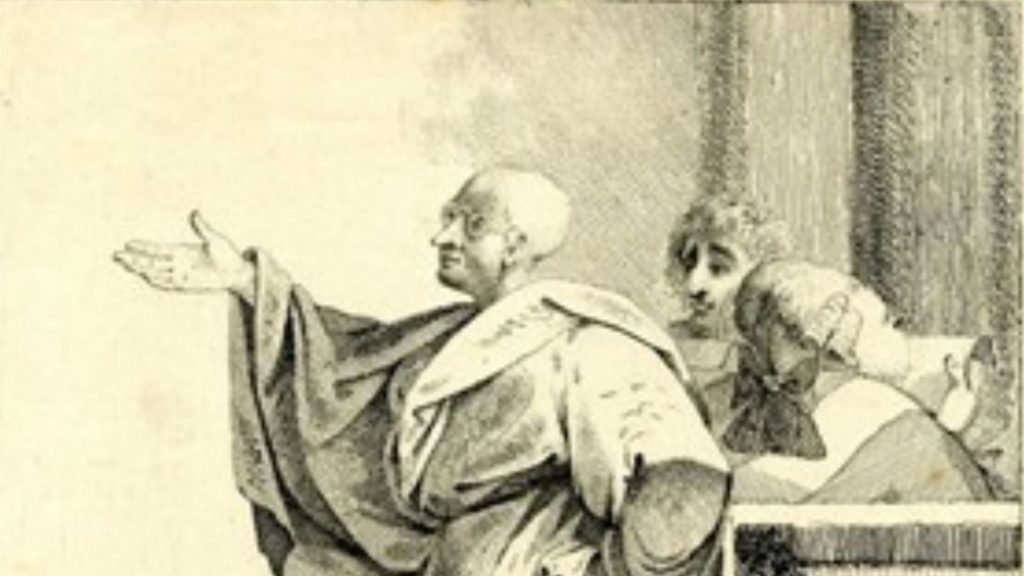 Verres, the Roman governor of Sicily, who, during his governorship, plundered the Greek cities of that island, of their most precious and revered works of art.

In 1816, a Select Committee of Inquiry of the British House of Commons was called upon to deliberate as to whether it would be expedient for Parliament to purchase the Parthenon Marbles from Lord Elgin.

The reason why an inquiry was considered necessary was because even back then, serious misgivings were being expressed with regards to the manner in which the Parthenon Marbles came to be in Lord Elgin’s possession, the government not wanting to be seen to be appropriating stolen goods.

Lord Aberdeen for instance, expressed the opinion that “he did not think that a private individual could have accomplished the removal of the remains which Lord Elgin obtained,” whereas Doctor Hunt reported to the Committee that: “a British subject not in the Situation of an Ambassador could not have been able to obtain from the Turkish Government a firman of such extensive powers.”

Eventually, by means of reasoning widely considered to have been flawed, by leading jurists today, it was determined that Lord Elgin’s appropriation of the Parthenon Marbles was legal and they vainly await repatriation to the present day. Rewind the clock almost two thousand years and a similar proceeding took place against Verres, the Roman governor of Sicily, who, during his governorship, plundered the Greek cities of that island, of their most precious and revered works of art.

Even back then, public opinion considered such spoliation to be morally reprehensible. Verres’ prosecutor, the great Cicero, commented on the psychological effect the plundering of cultural and religious artefacts had on those who they belonged to, emphasising this loss as being of greater importance than any political or public utility associated with their public display in Rome. His oration eerily reflects the effect of the removal of the Parthenon Marbles from the Acropolis, on the Greek people: “You Verres will plead that your statues and pictures have adorned the city and the forum of the people of Rome… a decoration splendid to the eye, but painful and melancholy to the heart and mind: I looked at the brilliant show that was made by your thefts, by the robbing of our provinces, by the spoliation of our friends and allies… a large number of persons from Asia and Greece, who happened at the time to be serving on deputations, beheld in our forum the revered image of their gods that had been carried away from their own sanctuaries and recognising as well the other statues and works of art, some here, some there – would stand gazing at them with weeping eyes… objects wrenched from our allies by criminals and robbers.”

As was the case with the Select Committee of Inquiry into Lord Elgin’s deeds, the Romans too were concerned with the manner in which the cultural heritage of the Greeks of Sicily was purloined by Verres. Lord Elgin’s spurious assertion that he obtained legal permission from the Ottomans was eventually accepted by the Committee. Verres’ assertion, that he paid money for some of the statues and therefore, his ‘purchase’ was legal, was not accepted by Cicero, as this took place under duress and with the Roman governor exercising undue influence. As such, his act of appropriation was a breach of trust: “You, under the presence of purchase which you put forward, in reality seized and took away these things by force, through fear, by your power and authority, from that man, whom, along with the rest of our allies in that country, the Roman people had entrusted not only to your power, but also to your upright exercise of it.” 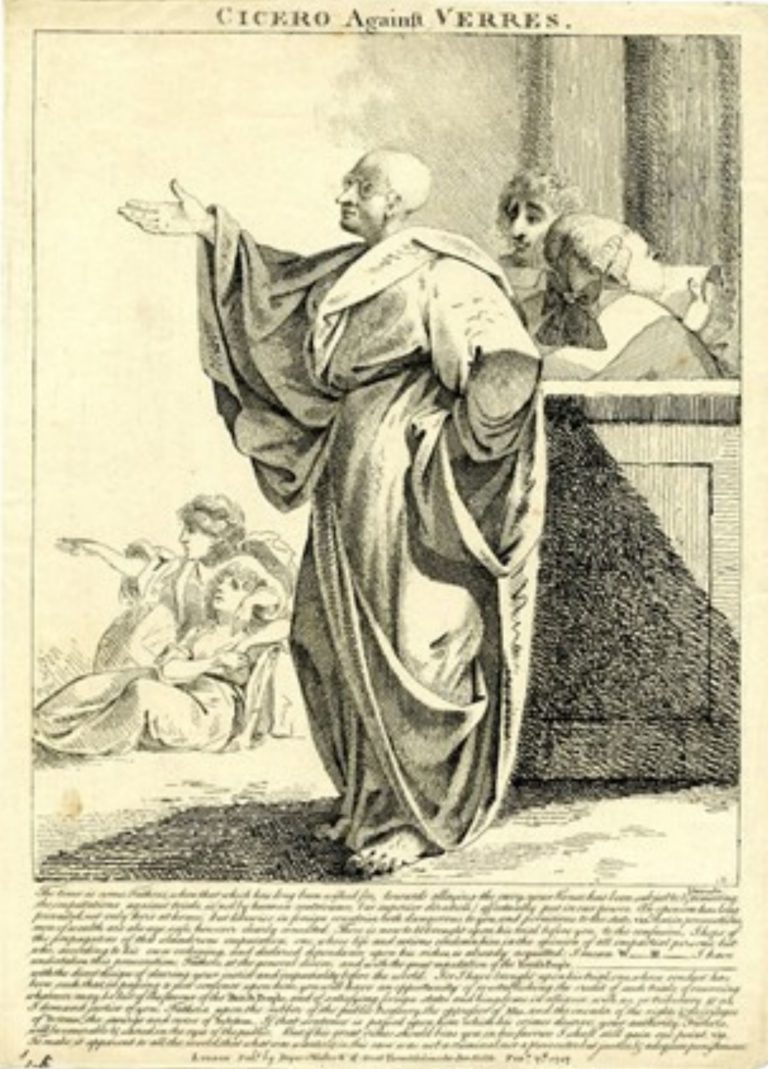 The concept of ethical purchasing thus was considered to be an important one to the Romans and the British two millennia later, a comparison being drawn by the Select Committee between the manner of acquisition of the Parthenon Marbles as compared to the Phygalian Marbles from the temple of Bassae. Cicero comments on the propriety of appropriating articles from a home in which an official is staying as a guest: “But it certainly was not right that the statue of Apollo should have been taken away from Lyso of Lilybaeum, a most eminent man, with whom you had been staying as a guest. But you will say that you bought it—I know that—for six hundred sesterces. So I suppose: I know it, I say; I will produce the accounts; and yet that ought not to have been done.”

During the deliberations of the Select Committee, the committee members were concerned about the effect of the removal of the Parthenon Marbles upon the Athenian populace asking: “Did it appear to create any sensation either among the principal persons or the inhabitants of Athens?” William Hamilton who was present with Lord Elgin, disingenuously responded by stating: “No unpleasant sensation whatever, they seemed rather to feel it as a means of bringing foreigners into the country and of having money spent amongst them.”

This seems to be the only reference to the emotions of the populace and no further follow up questions were asked in order to ascertain how Hamilton formed his opinion and who he spoke to. Cicero, on the other hand was much more sensitive to the effect Verres’ rapacity had on its victims: “What weepings of women, what lamentations do you suppose took place over these things? things which may perhaps seem insignificant to you, but which excite great and bitter indignation, especially among women, who grieve when those things are torn from their hands which they have been accustomed to use in religious ceremonies, which they have received from their ancestors, and which have always been in their family.”

Though going through the motions, the British Select Committee failed to thoroughly investigate both the manner in which the Parthenon Marbles were removed and the effect on Britain’s reputation if such a removal were to be condoned by the purchase of the Marbles from Lord Elgin. For Cicero, however, the lasting damage to Rome’s reputation caused by Verres’ rapacity as at the forefront of his mind, especially when some of his victims were Hellenistic royalty: “How do you suppose the news of this exploit of yours will be received in the dominions of other kings, and in the most distant countries of the world, when they hear that a king has been insulted by a praetor of the Roman people in his province? that a guest of the Roman people has been plundered? a friend and ally of the Roman people insultingly driven out? Know that your name and that of the Roman people will be an object of hatred and detestation to foreign nations. If this unheard-of insolence of Verres is to pass unpunished, all men will think, especially as the reputation of our men for avarice and covetousness has been very extensively spread, that this is not his crime only, but that of those who have approved of it.”

According to human rights lawyer and Parthenon Marbles activist Geoffrey Roberston, Cicero’s speech introduces the idea that art is not just property but rather, has special properties “because of its continuing significance to the people from whom it has been wrested, and a cultural value because of its religious or political context or connotation, or through the historical memories it evokes.”

Verres absconded from Rome after being prosecuted and as a result, his estate was ordered to pay compensation to the victims of his crimes. He spent the rest of his days in another Greek colony, Marseilles, where, fittingly, he was proscribed by Mark Antony, apparently for refusing to surrender some art treasures that Antony coveted for himself. Lord Elgin, vindicated by the Select Committee, did not abscond. Instead, his theft was legitimated by Parliament and its main beneficiary, the British Museum. Yet even today, the words of Cicero highlight the injustices of colonialism and imperialism, even if by his own admission, his more humane and sensitive approach to the cultural significance of art, serves to further cement the rule of the imperial and colonial power of his day: “In truth, the Greeks delight to a marvellous degree in those things, which we despise. And therefore our ancestors willingly allowed those things to remain in numbers among the allies, in order that they might be as splendid and as flourishing as possible under our dominion; and among those nations whom they rendered taxable or tributary, still they left these things, in order that they who take delight in those things which to us seem insignificant, might have them as pleasures and consolations in slavery. What do you think that the Rhegians, who now are Roman citizens, would take to allow that marble Venus to be taken from them? … What would the Thespians take to lose the statue of Cupid, the only object for which any one ever goes to see Thespiae? It would be a long business and an unnecessary one, to mention what is worth going to see among all the different nations in all Asia and Greece; but that is the reason why I am enumerating these things, because I wish you to consider that an incredible indignation must be the feeling of those men from whose cities these things are carried away.”