As dance takes over the 2013 Antipodes Lonsdale Street Festival, Sydney has prepared a Greekfest like no other 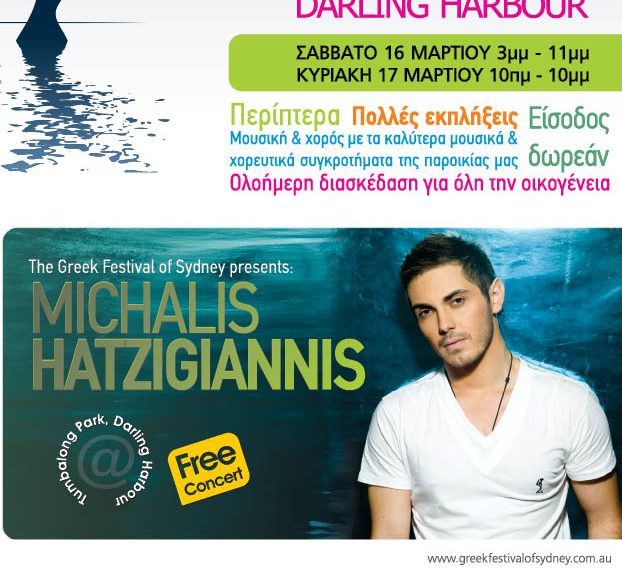 Loukoumathes, Zorba and images of blue and white will take over Australia’s biggest capitals this weekend for a joint celebration of all things Greek. The 31st Greek Festival of Sydney and the Antipodes Festival have created a rich and diverse cultural program for the year that culminates in a celebration to end all others this weekend. And what better way to top off a Greek festival then with a superstar of Greke music performing and both events. Greek popular singer Mihalis Hatzigiannis will perform on the main stages in Melbourne on Saturday night and Sydney on Sunday for free.

Hatzigiannis was born in Nicosia, Cyprus and graduated from the Cyprus Music Academy (Royal College of London) with a degree in piano, guitar and music theory. Starting out young with his first major performances coming at Eurovision qualifiers when he was only 17 years old, he had three hit records (all reaching platinum status in Cyprus) and a performance at Eurovision by the time he was 20. Sold out tours and platinum records followed right across the Greek speaking world, including 2 previous sold out tours of Australia.

Tumbalong Park on Sydney’s Darling Harbour will come alive for two days of non-stop entertainment featuring live music from Sydney’s finest Greek Australian and international musicians, Australia’s best Greek dancing displays and workshops, complimented by some of the most sumptuous Greek food in the southern hemisphere.

In Melbourne, dance is the key theme at this year’s 2013 Antipodes Lonsdale Street Festival with dance lessons, groups, flash mobs and a silent disco taking over the main Hellenic drag in Melbourne. Presented by Delphi Bank, the street will be overrun with all things Greek for the community of Melbourne enjoying a Hellenic big day out. The silent disco is a first for the festival. Each person picks up a pair of headphones, chooses their DJ of choice, sets their own personal volume and dances away. Silent Disco will run in the newly created outdoor Fix Beer Pop-up Bar (located on the QV side of Lonsdale Street), with music by Tropical Sound Waves DJs, Kosta Kay, Nomiko, George Vog and Deanos. Tickets are $19, and includes a drink.

O Horos (The Dance) sees some of Australia’s favourite Greek dance groups join forces for one huge collective performance. At the main stage, on Saturday and Sunday, each group will perform their signature dance from their region accompanied by local musicians, before coming together for one impressive united performance. Participating groups for the performance include: Pan Cretan Association of Melbourne; Pan Macedonian Association of Melbourne; Pallaconian Dance Group; Greek Orthodox Community of Melbourne & Victoria; Greek Orthodox Community of South Australia; Cretan Brotherhood of Melbourne; OPA! Dance Group; Cyprus Community of Melbourne; and Pontiaki Estia. Throughout the weekend, a plethora of dance groups from Australia will be performing in and around the main stages. A highlight are the Hellenic Dancers of Townsville whose performaers range from 6 years to 24 years of age. Ten of the 40 dancers they have have made their way to Melbourne to show one of the biggest Greek communities outside of the Hellenic Republic how they do it in the top end. Other participating dance groups of the 2013 Antipodes Lonsdale Street Festival include: Konstantinides Dance Group; Pegasus Dance Academy; The Cultural Centre of Florinians “O Aristotelis”; Transfiguration of our Lord Dancing Group; Pontiaki Estia Senior and Junior Dance Groups; Pallaconian Brotherhood Senior Dance Group; Pontian Community Dance Groups; Pontian Community of Melbourne and Victoria Dance Group; Cretan Brotherhood Senior Dance Group; Euxenos Pontos Dancing Group; Pan Macedonian Association of Melbourne and Victoria; and OPA School of Hellenic Dance.

For those wanting a work out, then Zorba ’til you drop is for you. On Sunday, at 1:00 pm on the main stage in Melbourne, a dance competition will combine skills and stamina and the last one still dancing the Zorba will be rewarded with a return flight to Greece courtesty of Qatar Airways and a four day Greek islands cruise thanks to Touchdown Tours.

Lazos Terzas, abandoned his film career in the 1980’s and opened the Centre of Pontic Theatre and Arts, where he produced classical plays in the Pontic dialect; plays such as Lazaragas, Ta Skotadia, as well as classic Pontic works such as Oi Momogeri and Oi Teleutaoi tou Poli Haita, a theatrical play which touches on the struggles of the refugee Pontic Greeks. Terzas is known for his stirring renditions of popular Pontic poems, and will perform some of these poems alongside the Pontian Dance Group. He is currently in Australia, where he took part in the national Pontian ‘Synapandema’ Gathering of Australia’s Pontic Greeks on Saturday at 7:05 pm on the main stage.

Melbourne born singer/songwriter Melpomeni was a long-standing member of the number one selling UK classical chart act, Mediaeval Baebes. She has toured extensively in the UK as well as Europe, the USA, Africa and the Middle East. After studying 20th century music composition at La Trobe University, she soon left to go travelling and chase history. After a brief period of living in Greece, she currently lives between Melbourne and London. She will perform on the Second Stage on Sunday at 5:25 pm.