The first Greek paratrooper to go to battle with the Germans as a secret agent in WWII was Sonia Sofia Stefanidou, the eldest daughter of Pontian doctor Filopomenas Stefanidis.

Born in Odessa, in the Ukraine, she moved to Athens at the age of five in 1907 after her father signed up as a volunteer doctor for the Greek Army during the Balkan Wars. Stefanidis managed to convey his patriotism to his brave daughter.

Proving that the apple doesn’t fall far from the tree, she followed in her father’s footsteps by signing up as a volunteer at the School of Air Defence Nurses just a few months before the start of the Greek-Italian war. Following the declaration of war she requested to be incorporated into the defence services. “I considered it my duty to contribute as much as I could to the ‘sacred struggle’,” she said.

In Athens during the German Occupation, she wrote: “The view of the hooked cross on the acropolis killed my soul.” Following an Odyssey of two and a half months, she arrived in the Middle East and requested to serve with the Royal Greek Middle East Army consisting of Greek units that had escaped to Egypt.

On 1 June 1942 she was called to serve at the 1st Military Hospital of Alexandreia, but it was not enough for her to serve as a nurse. Hence, on 8 April, 1943, she asked Greek prime minister Emmanouil Tsouderos to serve in the unit of commandos. Her request was accepted, and that is how the fearless Pontian found herself receiving intelligence and army training, including parachuting. Her performance was found to be at “an exceptionally high standard”.

On 2 July 1943, Stefanidou parachuted near Florina, northern Greece, as a member of a team of agents in order to gain information. Disguised sometimes as a beggar, and other times as a villager, she was able to move around regional Greece to gather information which a male spy would never have been able to access.

On 2 September, 1943, the entire team of agents were caught by the Germans, however a German guard helped them escape.

Sonia escaped to Kalabaka and joined a troop of resistance fighters with British ties. 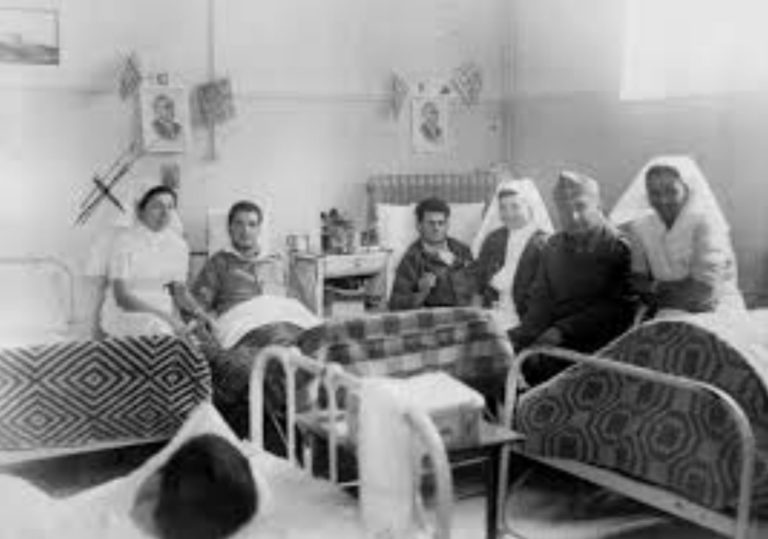 In December 1943, Stefanidou returned to Egypt and joined the newly created volunteer squad of Greek women. Unconfirmed sources state that she went on a mission to Crete (January-October 1944) where she came into contact with Manolis Bandouva, a pioneer of the resistance movement on the island. The nature of the mission remains a mystery until this day.

Following the departure of the Germans from Greece, Stefanidou returned. In May, 1945, the war ended in Europe with the defeat of Hitler’s Germany. The only front left still fighting was in Japan, and Stefanidou’s attention was drawn to Asia where she requested to enlist with the United States Army as a paratrooper for operations in the Pacific. Her application, however, was rejected. And that is where the war ended for the brave Greek commando.

In peace, Stefanidou worked for the Greek Ministry of Foreign Affairs. She lived the rest of her life modestly and never cashed in on her offerings during the war.

She died in the spring of 1990. According to her wishes, she was buried in her military uniform wearing her medals.