“Achieving The Impossible” with Greece in 2004

Greek-American sports journalist George Tsitsonis’ book sheds light on the importance on one of the greatest upsets in sporting history: Greece’s Euro 2004 victory 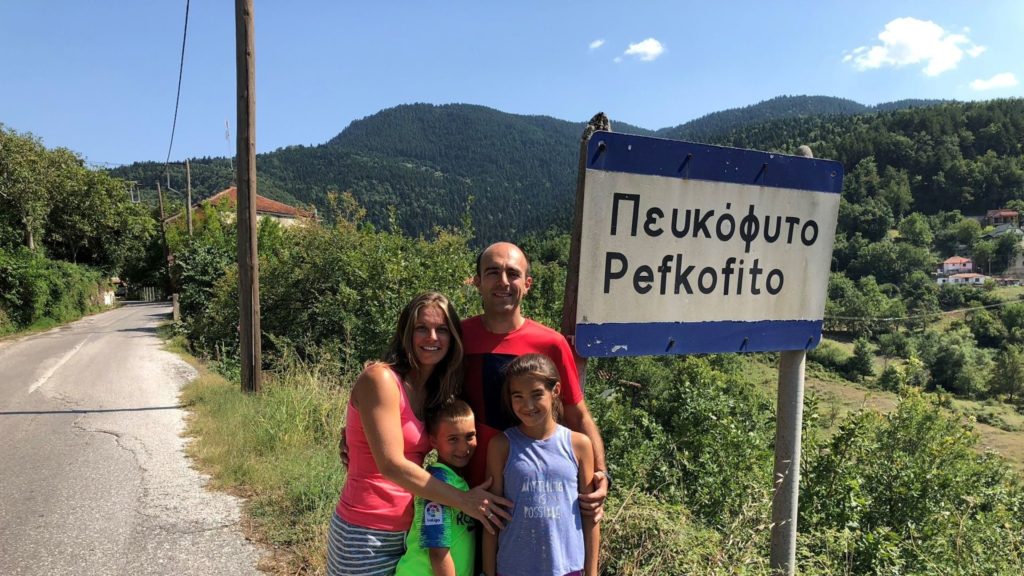 The author of the book George Tsitsonis and his family in the Greek village of Pefkofito. Photo: Supplied

The summer of 2004 will forever remain in the memory of all Greeks for the historical achievements of their national soccer team, even if they weren’t faithful followers of the sport. The soon-to-be released book by Greek-American sports journalist George Tsitsonis, titled “Achieving The Impossible”, covers highlights from that exciting period in history and is a memoir for future generations. The novel, written in English, aims to offer Greeks and the entire football community, a better idea for how truly great the achievement of Otto Rehhagel was and the great sportsmanship of the team. Tsitsonis has great experience in sports journalism and is known for his work in publications such as FourFourTwo, Goal.com and FIFA Weekly. He spoke to Neos Kosmos about what inspired him to write this story, which he believes casts the spotlight on the greatest moments of Greece’s success and the impact of this win on Greece’s athletic and cultural heritage.

– What made you write this story?

There were a few reasons that led me to this decision. For starters, this is one of the greatest underdog victories and shocks in the history of European football and there is scant English-language coverage of the feat. And some of the material that is available paints a drab account of Greece’s victory at the Euro 2004, focusing solely on the team’s defensive style of play. There’s so much criticism and I thought it was overly simplistic and quite unfair if I’m being honest.

I wanted to help give Greeks across the diaspora and football fans everywhere a more comprehensive account of what went into building this team. And a glimpse into the sheer magnitude of the accomplishment, especially considering Greece’s lack of pedigree on the international level.

Also, as a Greek-American, I have always wanted to give something back to my heritage, so in a very small way I attempted to do so by writing this book.

– When did you come up with it?

In July 2007, I started looking at the history of Greek football a little closer. It dawned on me how there wasn’t much out there regarding Greece’s greatest ever football success, winning the Euro 2004. One afternoon, I started taking notes and decided to try and write a book on it. It was a lot more involved than I could’ve imagined, however chapter by chapter it started to come together. It was too niche a subject for most publishers, but despite the fact that I was pretty much an unknown author, there was some interest from a few sports book publishers in the United Kingdom. Then a message came from Bonita Mersiades, the editor of Fair Play Publishing in Australia. It seemed like a natural fit and I was honoured to eventually sign with them.

– Which part of Greece’s run to the Euro 2004, which is told throughout the pages of your book, would you point out as the most significant?

There are two instances that come to mind. The first is during the qualifying campaign. After beginning with two consecutive defeats, Greece bounced back to win two matches in a row. Then came the most difficult game of the campaign, an away match again Spain in Zaragoza on June 2003. Greece came away with a 0-1 win (thanks to a Stelios Giannakopoulos goal) and many of the players I spoke to indicated that this was a turning point for the team. It was then when they realised that what they had started to put together with Otto Rehhagel was indeed something special. After that win, they had the confidence to take on anyone.

In regards to the tournament itself, once again the players seem to speak unanimously that the win against France in the quarter-final is the most significant. That French team was full of world-class players, led by Zinedine Zidane and Thierry Henry amongst others. Greece went toe-to-toe from the start, never giving an inch to their opponents and despite the late onslaught, they were the better team throughout the 90 minutes. Suddenly, instead of being merely happy to be there, the coaches, players and supporters began to truly believe that they could lift the trophy.

– What do you believe is the impact of this success in Greece heritage, either in sports or culturally?

In terms of sports, this has to go down as the biggest success in Hellenic sporting history. The national basketball team winning the 1987 European Championship was an enormous feat. They possessed some great players however, including the legendary Nikos Galis. Their success, while celebrated greatly, was not altogether as much of a surprise.

It was different for the football team. Basketball is loved in Greece, but football remains the sport that Greeks are most passionate about. Winning the Euro was a moment most Greeks never thought they would live to see. It will forever hold a special place in the hearts of fans.

Culturally, there is a sense of pride that has emerged from winning the tournament. The pride of being able to match up against bigger nations and the rest of Europe. Greece has endured so much in the last decade with the crippling effects of the financial crisis. Still, to this day people bring up the Euro when sitting at a table altogether or when there’s football playing on the television. That win is a reminder that when Greeks are organised and united, they are able to do anything, even achieve the impossible.