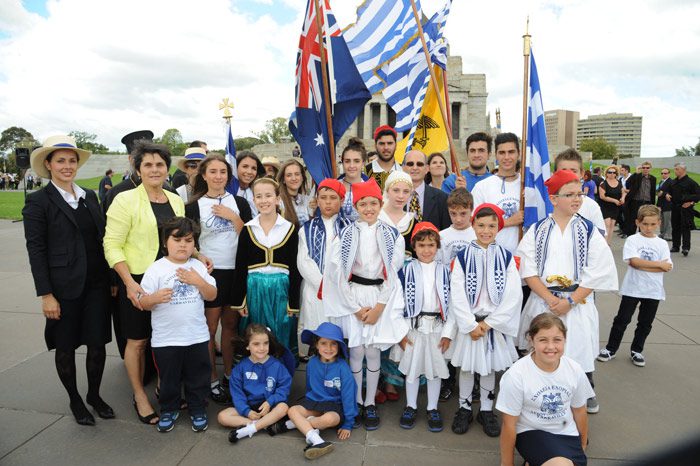 Australian Prime Minister Julia Gillard joined representatives of the Greek community in Sunday’s Greek Independence March in Sydney. Ms Gillard, along with environment minister Tony Burke, opposition immigration spokesman Scott Morrison, NSW Liberal MP David Clarke and NSW opposition leader John Robertson were all at The Domain for the occasion, along with an Archbishop of the Greek Orthodox Church, the Cypriot high commissioner and the president of the NSW Greek Orthodox community. They joined thousands to celebrate Greece’s independence from the Ottoman Empire.
In a statement to Neos Kosmos on the national day of Greece celebrations, the prime minister said that March 25 is a day “we honour the courage and sacrifice of those who fought for Greek independence and all those who have worked so hard to build Greece as a country which has withstood many challenges, yet has never lost its soul”.
She added that “in 2013, it is true that Greece still faces difficult times, but I know the Greek people’s sense of pride and stoicism will see the country through towards better days ahead”.
In Melbourne, the parade was held on Saturday, as thousands marched on the steps of the Shrine of Remembrance to mark the 1828 exit of Greece from the Ottoman Empire. Minister Nicholas Kotsiras was there representing the Victorian premier Denis Napthine; Federal Labor MP Maria Vamvakinou representing the prime minister; Sophie Mirabella representing the Federal Opposition Leader; Haris Dafaranos Greek Ambassador to Australia; Daniel Andrews, Victorian opposition leader; and Bill Papastergiadis, President Greek Orthodox Community of Melbourne. Susan Blake, member of the trustees committee for the Shrine of Remembrance, laid a wreath in remembrance of the Greek heroes who fought for our freedom, along with Kostas Nikolopoulos, general secretary, organising committee of the Greek National Independence Day march.
Adelaide chose to honour the heroes and march to the Shrine of Remembrance also on Sunday. Dignitaries and politicians such as Tom Koutsantonis and Federal Labor MP Steve Georganas both laid wreaths at the shrine.
In her speech to those in Sydney, Ms Gillard said it was “a day of seriousness and also of enjoyment”.
“(It is) a day to commemorate great patriots and a day to celebrate what they won and what their descendants have built around the world,” she said.
Other parades took place all over Australia, and Greek Orthodox Churches held services in remembrance.