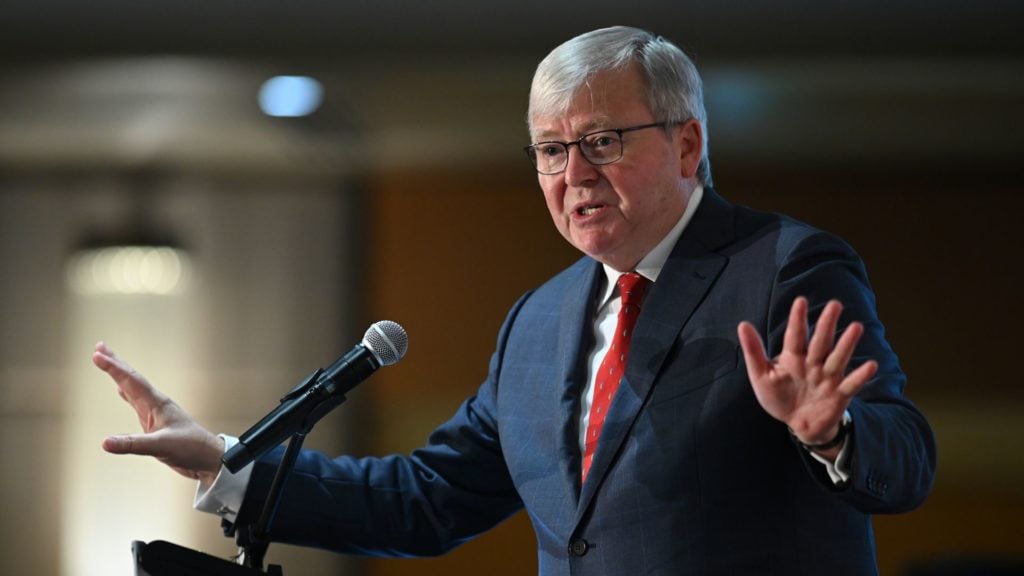 Former Australian Prime Minister Kevin Rudd has accused the University of Queensland (UQ) of being excessive in suspending for two years Drew Pavlou who is in the final six months of his studies and is a member of the University’s senate.

In a statement issued by his office to Neos Kosmos, Mr Rudd said: “As a Queenslander and a former prime minister, I’m increasingly concerned at how Chancellor (Peter) Varghese is presiding over the shredding of the national and international reputation of one of our nation’s leading universities (UQ) through the mismanagement of the Pavlou case.”
Mr Pavlou, 21, has been critical of Chinese influence on the campus and has called into question the People’s Repulic of China’s policies against its Uyghur minorities –democracy protesters in Hong Kong.

Mr Rudd is the first senior Australian politician to draw direct attention UQ and to Mr Pavlou in particular.

Last week, Mr Pavlou was handed a two-year suspension by a UQ disciplinary body. The university’s Chancellor Peter Varghese subsequently announced that there would be an out of session meeting of the Senate to look at Mr Pavlou’s suspension.

Mr Rudd’s comments came just days after the UQ Chancellor called for the special out of session meeting of the Senate to be held this week.

In a statement last week, Mr Varghese said: “There are aspects of the findings and the severity of the penalty which personally concern me.

READ MORE: Student activist Drew Pavlou suspended for protests in support of Hong Kong independence and criticism of Chinese influence at his uni

“In consultation with the Vice Chancellor, (Peter Høj) who has played no role in this disciplinary process, I have decided to convene an out-of-session meeting of UQ’s Senate next week to discuss the matter.”

A UQ spokesperson told Neos Kosmos yesterday that the special session was to take place on Friday (5 June).

Last year, on 24 July, Mr Pavlou, was one of the organisers of a UQ campus meeting in support of Hong Kong demonstrators. That meeting became heated and police were called in when pro-PRC supporters appeared at the meeting.

The day after the campus unrest, Dr Jie issued a post on the consular website praising the behaviour of pro-PRC supporters. Mr Pavlou was directly named as one of the organisers in the Global Times, a PRC publication/website and by Chinese media in Australia. As Mr Pavlou received verbal threats and was attacked online.

Mr Rudd said: “Varghese has allowed this case to escalate into a major debate around the world as to whether the university stands for academic freedom or not. It should have been nipped in the bud much earlier.

“Varghese has boasted he has the experience to handle the complexity of the university’s China relationship given his background as a senior Australian diplomat. … Instead, the university is now seen around Australia and the world as bending the knee to Beijing, rather than just dealing with a badly-behaved undergraduate.”

Mark Tarrant, Mr Pavlou’s lawyer in his case against the PRC Consul General for Brisbane, Dr Xu Jie, told Neos Kosmos that he could not understand how Mr Rudd could accuse his client of being “badly behaved” when he was advocating for the freedom of speech and, upholding the rights of the Uyghur minorities and supported rights of the pro-democracy campaigners in Hong Kong.

“I would have preferred Mr Rudd to have criticised Dr Xu Jie’s praise/incitement of violence against peaceful protesters rather than critising Mr Varghese’s failure at UQ brand management,” said Mr Tarrant.

Mr Rudd said that Mr Pavlou was not the first activist to have ever protested against their university.

“I would have expected Pavlou’s activism to be tolerated, just as other radical student activists have been tolerated in decades past.

“If he has violated state or federal laws, then there are mechanisms available for dealing with that outside the disciplinary procedures of the university.”

Mr Pavlou told Neos Kosmos last Saturday that his status on the university senate was not affected by the disciplinary decision although he had no direction as to whether he could attend the out-of-session meeting called for by the UQ chancellor.

Mr Pavlou said that he intended to appeal and take the matter to the Supreme Court where he stood a better chance receiving of an independent and unbiased hearing.

In a statement on its website, UQ rejected that its disciplinary case against Mr Pavlou was “a free-speech issue” and that disciplinary matters were “initiated in response to complaints made to the University.” The 11 complaints listed in a 16-page document compiled with the assistance from two top law firms of MinterEllison and Clayton Utz.

Two weeks ago, Mr Pavlou’s legal team launched a formal complaint with UQ and called on the university to dismiss Dr Jie as the adjunct professor of the Confucius Institute.

“The biggest stress over the past 12 months that this has been going on has been the burden it has put on my family. They were initially against the stand I had taken but they completely support me now and that has been a great relief,” said Mr Pavlou.

Mr Rudd said in his statement that: “It’s time for Varghese to act now to restore Drew Pavlou’s right to complete his degree – while requiring Pavlou to adhere to the same social media protocols as the rest of us.

“Leadership is more than a set of rules and procedures. It’s about protecting and enhancing the standing of the institution, in this case, a great university,” Mr Rudd concluded.