Sooshi Mango spreads the joy of laughter through their ‘ethnic’ skits

“Our background is Italian however I have always felt that my second nationality is Greek”, Carlo Salanitri tells Neos Kosmos during an interview about ‘Sooshi Mango’ and their rise to fame 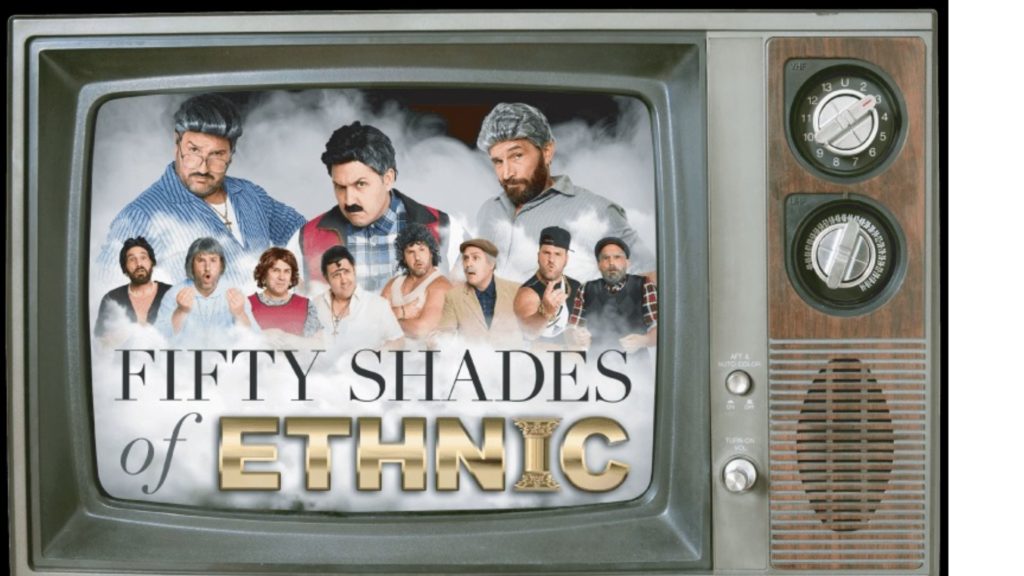 The outrageously funny solo tour ‘Fifty Shades of Ethnic’ that was sold out across the country will be available to fans this Sunday, 5 July at 6pm. Photo: www.sooshimango.com

Growing up next door to the ‘Greek’ suburb of Oakleigh in Melbourne, it is not surprising that the hilarious trio Sooshi Mango went viral with their first ever Greek-themed clip based on the ‘old-time’ Greek Fish n’ Chips shops of Australia.

Sooshi Mango is on the rise. The Australian comedy troupe made up of two brothers, Joe and Carlo Salanitri and their close friend Andrew Manfre started off in 2015. Their growing popularity has been astounding with the trio amassing over 70 million views online via their hysterical video skits, from the ‘Greeks versus Italians’ sketch, to the famous ‘Ethnic Dads’ series and to the wildly popular videos of ‘Ethnic Dad Concreters’. Their humour transcends cultures not only in Australia but across the globe.

Though the parents of all three members hail from Southern Italy, many of the group’s most well known characters are based on the stereotypes associated with older members of ‘ethnic’ families in general, including the Greeks. Growing up alongside many Greek Australians, their insight into the Greek culture has added tons of comic layers to their funny characters.

“Comedy has always been the number one thing in our lives. We didn’t really think of becoming stand-up comedians but comedy has always been in the forefront,” Carlo Salanitri told Neos Kosmos. “Even at school I was always the class clown. So when we started to do these videos it came to us naturally. It was almost like therapy, like a calling.”

Watching the skits it is obvious that the trio have the best time when they get together to create their funny videos.

While they never expected to go viral, what started with a few videos in their spare time soon evolved into something much bigger, and their desire to bring more comedy to their new fans, grew with every view.

“We have lots of fun. In the beginning we didn’t know if people would gravitate to it, but we didn’t really care. We were catching up every Wednesday or Thursday to create them, and the main reason we would do it, is because we were having so much fun. We would laugh and laugh, and we became addicted to that. Then it caught on and sort of snow balled.”

The Greek Fish n’ Chips shop skit was received with a lot of laughter and went viral especially within the Greek-Australian community. “It was so much fun doing those characters. It comes naturally. The Greeks love it. A lot of my friends’ dads were a bit like that and it felt so natural to play these roles.”

“Our background is Italian however I have always felt that my second nationality is Greek. My best friends were Greek. I was always at their house. My second mother, as I call her, was my best friend’s mum. Because of her I would eat dinner twice! She would cook for me and then I would go home where I had to pretend that I was hungry and would have to eat my mum’s dinner too. I even played for a Greek soccer club, Bentleigh Greens. Everyone thought I was Greek and would speak Greek to me. I adore the Greek culture. It is very similar to ours and I feel at home.”

Their Greek fan club began to grow when they joined Greek-Australian comedy legends, Nick Giannopoulos and  Mary Coustas on their national tours.

“We did two state shows with Mary Coustas and Nick Giannopoulos in 2017, ‘Wogs at Work’ and then ‘Star Wogs’. It was great, and we learned so much. We were ready then to go out on our own and started our very own tour ‘Fifty Shades of Ethnic’ which was cut short by COVID-19. Moving forward, I can’t say too much, but we are preparing something big.”

Fifty Shades of Ethnic was an outrageously funny solo tour with 28 shows sold out across major venues around the country. The Sooshi Mango brand of humour has proven hugely popular with Aussies of all backgrounds as well as global fans; so much so Sooshi Mango has enjoyed a hugely successful tour in Canada with the show ‘Ethnic Vacation, The Invasion of Canada’.

Growing up in Australia, Italians and Greeks alike faced some prejudice in those days, as the ‘New Australians’ in the country.
“By the time we got a little bit older there was so many of us that we were comfortable enough to stand our own. The previous generation had it tougher. What they went through and how they stood their ground helped us a little bit more. It’s still around today. I don’t think it will ever go away and that is why we like what we do as we are shining the flag for our people, of our ethnicity, whether it’s Greek, Italian or Lebanese.”

Their parents, the older generation, are their protagonists.

“My father recently passed away. He was our number one fan. When you mention influences, my dad was a huge influence. He would walk into a room and bring with him laughter. My mother on the other hand, was a bit worried that her kids were dressing up as old ethnic ladies,” Carlo Salanitri laughs.

The COVID-19 lock-down did not stop the Sooshi Mango trio. The new circumstances, though hard, inspired them with new jokes that would provide the relief of laughter to so many people doing it tough. “People at this time really need that humour. A lot of comments we get show that. We get messages that we have brought happiness and laughter in a time when things weren’t good. And that is what keeps us going. In the beginning it was for fun, for us, but now it seems to bring a smile to others too.”

For their huge circle of fans, Sooshi Mango is streaming their smash-hit show “Fifty Shades of Ethnic” this Sunday, 5 July, at 6pm. This will be available to watch on your TV for 24 hours at the cost of $19.95. To book, visit their page at www.sooshimango.com

If you haven’t already, follow Sooshi Mango on social media, on Facebook, Instagram or Youtube.
They are never short of ideas, and their jokes and comic videos keep coming every week, spreading the joy of laughter to millions of viewers in Australia and across the world.