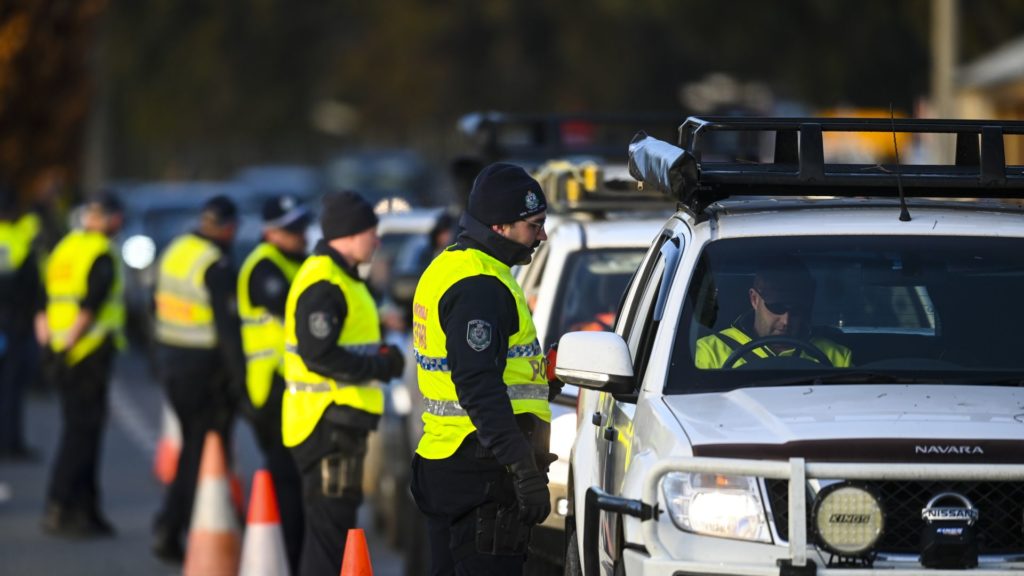 NSW Police officers check cars crossing from Victoria into New South Wales at a border check point in the border town of Albury, NSW. The NSW-Victoria border was closed from 11:59pm on Tuesday. Photo: AAP/Lukas Coch

Victoria records another 134 new cases of COVID-19, the third day in a row that the number of new cases have gone over 100.

As the state prepares to reimpose stage three restrictions by midnight tonight across metropolitan Melbourne and the Mitchell Shire in an effort to bring the second wave of the pandemic under control, authorities warn that police presence will dramatically increase across these areas.

Police will set up roadblocks outside the city as citizens in lockdown will have to comply to stay-at –home directives once again.
According to Victoria Police Chief Commissioner Shane Patton from tonight several hundred more police would be involved in Operation Sentinel.

Victorian hospitals are also experiencing a second wave as forty-one Victorians with coronavirus are in hospital and seven of those are receiving intensive care. The number has nearly doubled from a week ago, when there were 23. Last month there were only 4 patients in hospitals.

There are 860 active cases in the state, but the vast majority of people are not requiring hospital treatment, indicating that this time round the virus is affecting the younger population at this stage.

In New South Wales there were eight new cases of COVID-19 diagnosed overnight, the 7 are in hotel quarantine and the 8th is a woman in her 30s from south-western Sydney. There are further investigations to determine the timing of her infection. Her close contacts and members of the staff at Liverpool Hospital are in isolation.

A Victorian teen was on holidays in NSW when his family was told he had tested positive for coronavirus, according to NSW Chief Health Officer Kerry Chant.

Though the whole family underwent COVID-19 tests and had been cleared before leaving Victoria for a trip to Merimbula on the South Coast of NSW, they were informed by Victoria Health that the teen’s test had been an error and he was in fact positive.

The family attended an event at the Tathra Hotel and are now in isolation in Merimbula. The eighty people who were at the time at the hotel are being contacted to get tested.

The family from Victoria was not from a coronavirus hotspot when they left for their holiday.

NSW Premier Gladys Berejiklian is also urging residents of communities along the border with Victoria to stay in their communities as the spread of the virus in Victoria is escalating.

To prevent movement, Ms Berejiklian said she was considering setting restrictions to stop residents leaving towns like Albury or Moama. Two possible cases in Albury are still being investigated.