The Journey: Women Left Behind

The year 1954, time to depart my beloved homeland of Ithaki, the intimate village of Agios Ioannis, the only genuine home I had ever known.

My heart torn between two contrasting and distinct worlds, the village where treasured childhood memories lay and Australia, the land of promise, the land where I could finally bond with my father Panayiotis, following a 14-year absence. A strong yearning for both the known and unknown tugged at me, conflicting emotions besieged me like a whirlwind. 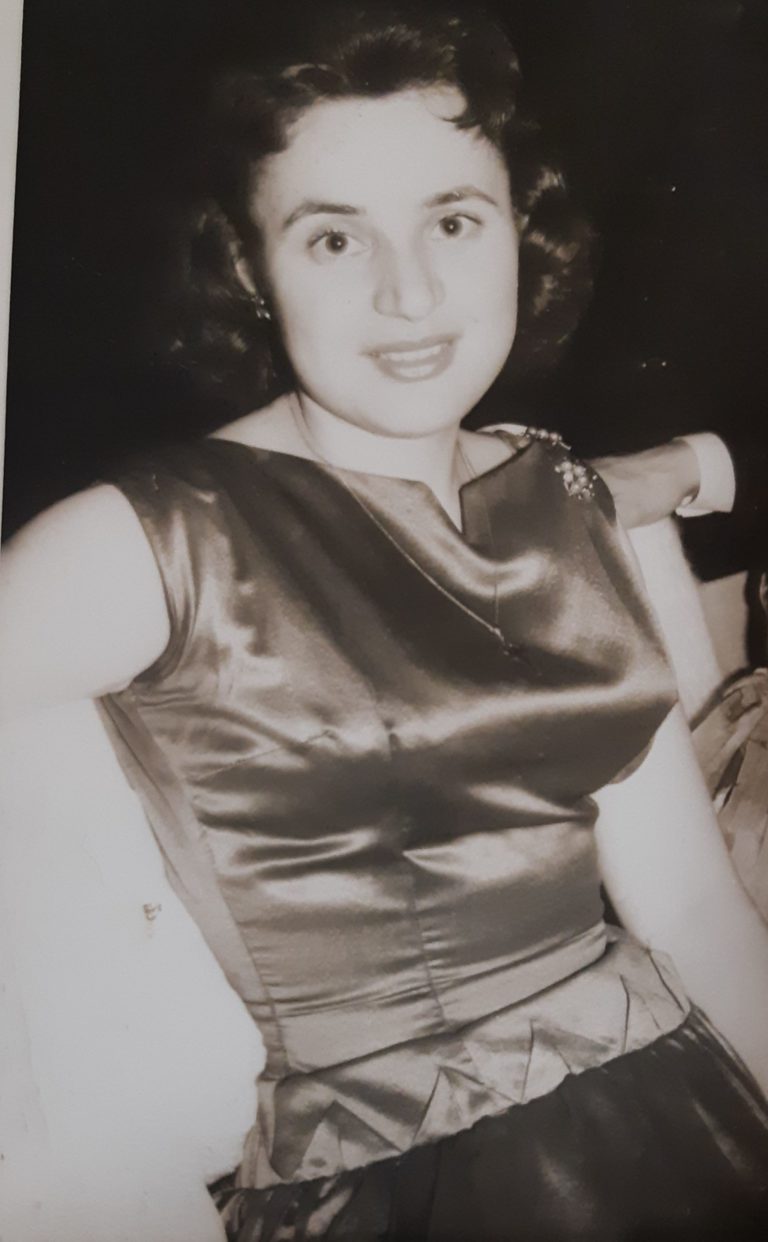 Hesitantly and tentatively boarding the taxi, with my dear mother Spiridoula, sister Fotoula, and nona Foto, our eyes darting ceaselessly, endeavouring to capture every minuscule detail of our tiny, precious village. With heavy hearts and tears flowing down our pale cheeks, bidding farewell to our dear aunt Anastasia, childhood friend Sofia and our horiani, we were inconsolable. My eyes desperately capturing one final glimpse of the beaches of Aspros Yialos, Kedro, Kaliva and Vrissi that I relished as a child, swimming and playing carefree in the warm, welcoming turquoise waters of the Ionian Sea overlooking Kefalonia. Frantically, I opened the car window capturing the intense scent of sage, hearing the chatter of the village children and gazing at the alluring Greek sun.

This day, engraved in my mind, a day I don’t often choose to recall as the unbearable pain still etched into my heart. Many tears shed wondering if I would ever return to this magical place I called home for 15 years. Memories now behind me, my cherished island I would not see for another 20 heart-rendering years.

As I boarded the ferry, I glanced at my mother, a 43- year-old woman who was travelling to a country on the other side of the world, to a husband she barely knew, to a way of life that was unknown and foreign. For a woman who raised three children alone, working tirelessly on the unforgiving land, she appeared forlorn, confused and fragile. A night spent in Athens before our departure reminded me of the previous year spent with my father and sister, becoming acquainted in the midst of the busy streets of Plaka overlooking the ancient Greek ruins.

My dear father understood the obligatory necessity to develop a relationship with his daughters, on neutral ground, away from the watchful eyes of Ithaki, sharing the wonders of Athens together, creating new memories. My patera fondly and excitedly describing in great detail the suburban streets of Melbourne, front and backyards lined with tall trees and heavily scented flowers, shops bursting with fresh produce, trams and buses overflowing with passengers and, most importantly, the abundant opportunities that awaited us. This image provided me with great comfort, a newfound optimism, excitement had wrapped its arms around me like a warm, familiar blanket.

The Fairsea ship proudly berthed in Pireaus waiting eagerly for its passengers, coats flung over our weary arms whilst carrying heavily laden suitcases we boarded the colossal ship. Our hearts began to beat faster with trepidation and anticipation. We were the fortunate travellers, as my father had paid full passage for each of us, we would be sleeping in cabins, our new home for one entire month. The ship’s foghorn signalling the departure from our beloved Greece to the land of opportunities, ”Aftsralia” as we would call it. As I glanced behind me one last time, I gazed intently at the mountains of Greece, not knowing when my eyes would behold this vision again.

The entire voyage saw my poor mother and sister in poor health, vomiting relentlessly without respite, surviving on bread and water. Together with my nona we would eagerly join the other passengers in the dining room, a very impressive room with a vast array of food. The long days spent conversing with other Greek passengers.

I recall a mother and daughter from Thessaloniki making the journey to reunite with her absent husband and a father she had never met, 18 years spent apart. The woman questioning this long and unpredictable journey, voicing her concern for her precious daughter’s safety and future. The Fairsea was a sea of countless young girls as promised brides, photos of their betrothed clutched into their hopeful hands, longing for a blissful and prosperous future. I felt safe in the company of my grandmother I called “nona”. As a 76-year-old woman, she managed the journey as she did her life, with fortitude and courage.

Thirty long days and nights passed, ready to disembark the Fairsea, we stepped onto the dock of Port Melbourne. With suitcases clasped into our hands filled with precious possessions, hopes and dreams, I searched for my patera. Eyes darting left to right, desperately searching for his welcoming face, we were left disillusioned. No one was awaiting us. A fellow passenger contacted my father who at the time was “playing cards” at the Ithacan club thinking his family was to arrive the following day. My patera frantically left the club, made his way to the dock in a taxi. Finally we headed to Caulfield, to what I would call my new home.

Arriving at midnight, pristine beds fitted with crisp bedding awaited us. My sister and I slept together embraced in each other’s safe arms, feeling desperately confused, anxious and excited. As the sun rose, I scanned the room, pictures and icons carefully positioned on the freshly painted walls, and there in the corner lay my unpacked suitcase. As my sister and I gazed out the window admiring the green grass that seemed to surround our new home we decided in our hearts to remain in Australia for five years and then return to our birthplace of Ithaki. This thought and decision made everything more palatable.

Every facet of our new home in Caulfield was foreign: the refrigerator overflowing with butter, cheeses, cold meats and legs of lamb, the gas stove and oven, the cupboard filled with Monte Carlo biscuits, wagon wheels and Vegemite, the huge wooden wardrobes which would house our clothes, the bathroom with its running water and welcoming bath.

As I ventured out, I was greeted by the blue- and purple-tinged hydrangeas my father had meticulously planted for us. His efforts and love did not go unnoticed, we were grateful for the comforts he provided us. The 14-year absence was ever so slowly melting away, a bond developing, a family uniting.

In the early days, many of the Agios Ioannis villagers visited us, our home filled with chatter and laughter. Serving Australian biscuits stored in large metal tins made us feel special. Our neighbour, Mrs Alma, popped in with scones, jam and cream. This was another first for me, I had never tasted this iconic sweet. Many firsts would follow, a job at the factory becoming a seamstress, Saturday English classes with Nina Black, Greek cinema in Lonsdale Street and delighting in English movies such as Gone with the Wind, King and I and My Fair Lady. Our bedroom walls adorned with posters of famous film stars – Elizabeth Taylor, Deborah Kerr and Doris Day.

Together with my sister, we would purchase stylish suits and dresses from the factory I worked in, ever so interested in fashion after sighting the Melbourne women with their matching hats, shoes and gloves. In 1956, my family and I were fortunate enough to witness history: The Olympics, beholding the boxing and swimming finals, it was exhilarating. In time, Fotoula and I were becoming accustomed to the modern amenities and opportunities afforded to us. Day by day Melbourne life was becoming like a coat, warm, comfortable and secure.

After 14 long and trying years, my dear mother Spiridoula reunited with her husband, I was only 15 years old and now, as an 82-year-old woman, I can only imagine how challenging this was for her. A foreign country, husband and language, away from her precious olive trees and horiani (friends) of her village of Kalivia. My dear mother worked in a factory in Glenhuntly as a seamstress, back in the village she used to sew all our clothing, now she was earning a living from this skill.

Each Saturday, my parents would frequent the Rosstown Hotel on the Dandenong Road in Carnegie for lunch, taking pleasure in each other’s company whilst enjoying a pub meal of hamburgers, steak and hot chips. The separation they both endured slowly melted away and mutual respect and care for each other developed. Of course there were challenges and arguments, one instance, my father returned from the pub after drinking one too many beers, my furious mother raising a rolling pin, yelling at him, my father, the well-known joker and prankster, fell onto his knees clasping his hands together and proclaiming: “Forgive me Spiridoula, have mercy, I have blessed you with three wonderful children.” In unison they fell to the floor in laughter.

My grandmother, Foto, who busied herself each day preparing meals and undertaking the household duties, experienced difficulties in settling into a new way of Australian life, her love for Ithaki undeniably powerful. She bravely returned to Ithaki on her own after four years, we knew we would never see her again, this was an undeniably difficult farewell for me. Raised by this powerhouse of a woman, she turned to me at the dock and smiled, I knew her heart was aching, I bravely smiled with reassured eyes and whispered, “Adio, nona mou.”

Sunday afternoons my sister Fotoula, cousin Rosita and I would spend our time playing cards together with my brother Arthur and cousin Varvari (Barry). Konsina was the game we reveled in after devouring our Sunday ritual lunch of avgolemeno soup, roast chicken and salad. My father would join us too, whilst enjoying a mezze plate of fried steak, potatoes and eggs, cheeses and his absolute favourite, capers.

At the age of 18, I was permitted to frequent the Ithacan Club in the Mitchell building on the corner of Elizabeth and Lonsdale Streets. Listening to music played on a record player, we were fortunate enough to view the parades from the window, the Moomba and Anzac Day parades; we also marvelled at the women dressed in their finery attending the Spring Carnival. Life had become the antithesis of what we were accustomed to, we adapted to this new life, new world, new way of living. I learnt to communicate in English, navigate my way around the city, catching buses and trams, meeting up with my friends and co-workers.

Did I ever erase the memories of my birthplace, absolutely not, did I yearn to return to live there: without question a resolute “no”. Australia had become my new welcoming homeland, I married my husband Louis after meeting him at the Ithacan club, started a family of three beautiful children and now my gorgeous grandchildren to dote on. Life is good, I did return to Ithaki several times, but to tell you the truth I felt like a guest, this place I used to call home became a holiday destination, a distant memory of childhood moments, one I love but not one I would choose to return to permanently.

Freda Moraitis Razos is my name and this is my story of The Journey. Written by my daughter, Toni Razos Tsalikis