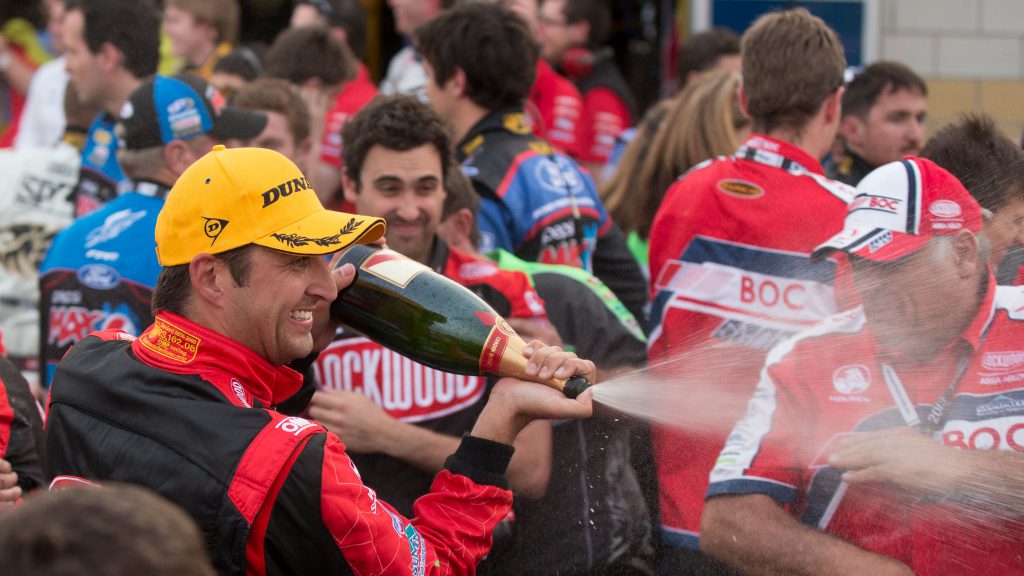 Former champion HRT driver Garth Tander qualified fastest in practice ahead of the opening V8 Supercars race at Symmons Plains Tasmania. The Holden Racing Team driver was quickest by one tenth of a second (51.07sec.) from defending champion Jamie Whincup, while Will Davison was third fastest in his Ford Falcon.

At the start Whincup extended his lead over the field by two seconds as Jason Bright and Garth Tander engaged in ‘door-banging’ tactics, while Coulthard and Winterbottom maintained their positions behind the leaders.

It was, however, New Zealander Fabian Coulthard that outdid Jamie Whincup to take out the opening race in Tasmania. Coulthard made a slick passing move on Whincup two laps into the second 25-lap sprint to take the lead and go on to hold the four-times champion behind him as he powered his VF Commodore to victory. Whincup just managed to keep his Red Bull Holden in second in front of the Ford of Mark Winterbottom which came in third.

Red Bull’s Craig Lowndes was never in it after having a disastrous start in the first of the two 25-lap runs. Pushed off the track by Shane van Gisbergen and hit from behind by Russell Ingall, he was forced to limp back to the pits with a broken gearbox and a flat tyre.

Todd Kelly was put out of action even before the start of the second sprint when his Nissan stopped just metres out on the track from pit lane and the Mercedes’ team again disappointed by failing to finish on the podium.

Sunday’s race commenced with a spectacular high speed front-on crash when Scott Pye’s brakes failed, spearing his Holden into the safety barrier and causing a safety delay which almost brought a premature end to the final race.

At the restart, Ford’s Mark Winterbottom took the lead but was soon overtaken by Coulthard with just three laps to go. Coulthard’s victory was his second in consecutive days after he broke through for his first ever V8 Supercar win on Saturday. Second behind Coulthard in the final race was Ford’s Mark Winterbottom, who crossed the line with a detached front guard, and HRT’s James Courtney in third.

Red Bull Racing’s Jamie Whincup, who finished fifth in the last race, did enough over the weekend to retain top spot on the Championship points table, but team-mate Craig Lowndes, chasing the all-time touring car race win record, finished the two sprints in 10th and 11th place. Lowndes will have to wait for better luck in New Zealand today to continue his quest for glory.