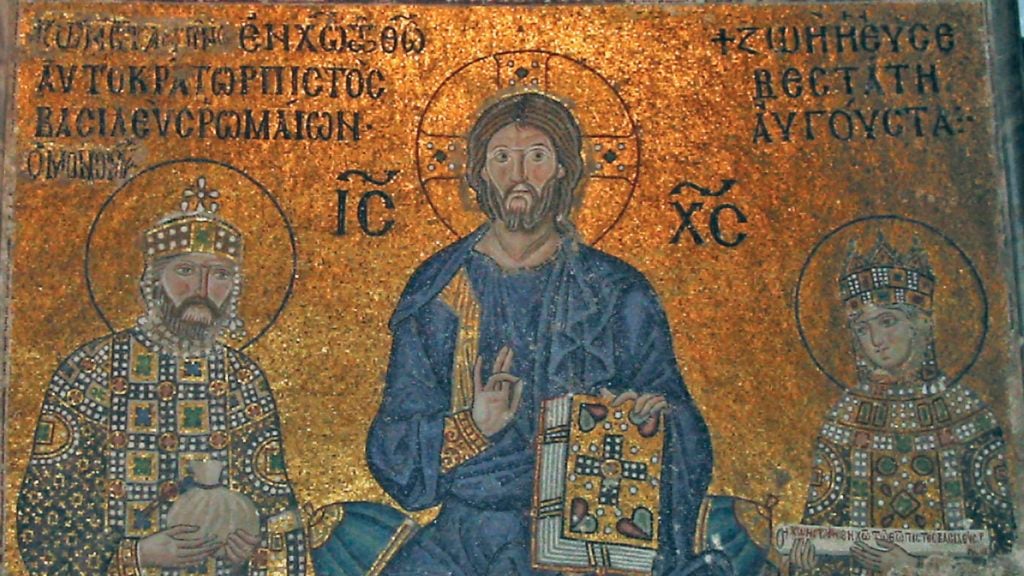 Uncovered Byzantine mosaic of Christ with Empress Zoe and in the Hagia Sophia, Istanbul. Image: Wikipedia

I freely admit to deriving much enjoyment from listening to Sakarya University History Professor Ebubekir (P)sofuoğlu’s (the P may or may not be silent) enlightened ruminations. The depth of learning of the august mass educator is quite breathtaking. Take one of his more recent tweets, or rather squawks, calling for the complete removal of the mosaics of the Great Church of Agia Sophia on the basis that one of the figures portrayed therein, Empress Zoe Porphyrogenita, was a prostitute:

“Will there be a whore in the mosque? If the icons are not removed, the legacy of Mehmed the Conqueror, Hagia Sophia, along with the prostitute Zoe will have become the first mosque in the world where a whore will be displayed. An end should be put to the nonsense regarding the protection of the idols and the icons that constitute disrespect to the Conqueror should be removed.”

(P)sofuoğlu’s outrage is only surpassed by his erudition. Sadly, he may have been bolting down baklava at the time he was consulting the New Testament for the purpose of composing his tweet and as a result, the pages of the Gospel of John, Chapter 8, where Jesus, who also happens to be a prophet in the Islamic tradition, refused to condemn a prostitute brought to him and instead, commended her to: “Go and sin no more,” became stuck together.

In like vein, the learned Professor (P)sofuoğlu must have had the pages of his Gospel of Luke stuck together by the syrup from the lokma he may have been devouring running down his fingers, because he seems to have missed the scene in Chapter 7 where the repentant prostitute anointed Jesus’ feet with her tears, kissed them and wiped them with her hair.

Had not the polymath (P)sofuoğlu his dondurma reputedly melt from the fervor of his research all over his Gospel of Matthew, perhaps he would not have missed the part where Jesus rebuked the Pharisees, saying: “I tell you the truth, the tax collectors and the prostitutes are entering the kingdom of God ahead of you.” So much for ladies first.

Consequently, Professor (P)sofuoğlu’s rancour at the depiction of prostitutes in a place of worship is not shared by Orthodox Christians. The central role played by prostitutes in the ministry of Jesus seems to reinforce the universality of the Christian message, as one of acceptance of all people, regardless of their past, or their position in life. Undoubtedly, this is something that as a pundit, (P)sofuoğlu would appreciate, considering that the districts around Agia Sophia teem with prostitutes and exploitation of these women, often migrants or refugees, by local residents is rife. Those exploiters are in dire need of finding some religion and it is hoped that the pious (P)sofuoğlu whose name means “son of the religious one,” may point them in the right direction.

Nonetheless, Professor (P)sofuoğlu’s is fortunate that in modern Neo-Ottoman Turkey, it appears that the use of misogynistic hate-speech within the public discourse is socially acceptable. Calling the Empress Zoe, who has been dead for the past one thousand years a “whore,” and a “prostitute,” the tautology being explained by the fact that his thesaurus is online and therefore he didn’t get any pages stuck together while consulting it, and demanding the removal of all mosaics from Saint Sophia as a result of her alleged career as a sex-worker is a fascinating conceptual leap that would confound even the most dexterous Hegelian. It is therefore logical for a Professor of History at Sakarya University to draw the inference that because he believes that a dead Empress provided escort services, the mosaics of Saint John Chrysostom, of Emperors Constantine and Justinian, and of Panagia Theotokos, who is also revered according to the Islamic tradition, should be removed from Agia Sophia.

Professor (P)sofuoğlu’s concern that the presence of Empress Zoe’s image within Agia Sophia constitutes an affront to Sultan Mehmet the Conqueror is touching. After all, Mehmet, with his large harem, in which the enslaved daughter of Byzantine historian George Sphrantzes, Thamar died at the age of fourteen, was renowned for his acute sensitivity to women. What is more, his harem was a gender-neutral employer, given that the Conqueror also compelled Jacob Notaras, son of Byzantine noble Loukas Notaras, also 14, to enter it, for his pleasure. According to the dictates of Sakaryan logic therefore, it is axiomatic that the ghost of Mehmet would be mortified by the presence of a Queen on a wall outside, but not inside, his harem.

Sadly, even by exacting Sakaryan Historical Faculty standards, there appears to be no truth to pontificating Professor (P)sofuoğlu’s groundbreaking claim that the Empress Zoe was a sex-worker. Rather, hers is a rather woeful story of a lonely girl brought up in the cloister, denied the opportunity to discover herself and love, by an overbearing, over-controlling father. Indeed, she was only permitted to marry the day before her father died, to Romanos Argyros, at the age of fifty. Romanos was sixty and could do nothing to slake the passions pent up in Zoe over the past half-century. Nor was he particularly interested in Zoe’s obsession within perpetuating the family dynasty. Desperate to become pregnant, before the invention of Fertility Clinics, the hapless Zoe employed magic charms, amulets, and potions, assiduously, but without effect. As is often the case, the emphasis on procreation took its toll on the marriage, with an exhausted Romanos finally refusing to share his bed with her.

The estranged couple did that which many Real Housewives of Affluent Constantinopolitan Suburbs and modern Turkish soap operas do: They engaged in affairs while tolerating each other. Lovelorn Zoe became infatuated with a servant, Michael and soon after, according to Byzantine historian Michael Psellus, Romanos was found drowning in his bath, as some of his retinue had “held his head for a long time beneath the water, attempting at the same time to strangle him.” Chronicler John Scylitzes wrote that Romanos was drowned on Michael’s orders, while Matthew of Edessa, in his history, accused Zoe poisoning Romanos.

Eager to legitimise their love, Zoe had the patriarch marry her to Michael on the very day of Romanos’ death. Regretfully, with young Michael’s ascent to the throne, his previously overwhelming eagerness for the middle aged Zoe magically dissipated. He took steps to sideline her from power, confining her to the palace gynaeceum, and kept her under strict surveillance. He refused to see her, even when he was dying, despite her fervent entreaties, and when his nephew, also named Michael, succeeded him on the throne, he banished her to a monastery on the island of Prigkipo, where she was forcibly tonsured and sworn into a religious order.

Restored to power at the insistence of the Constantinopolitans, lonely Zoe arranged to be married to court official Constantine Atroklines. Just a few days before the wedding however, tragedy struck, when he was poisoned by his ex-wife and the heart-broken Zoe settled on marrying the handsome and urbane Constantine Monomachus. Unlucky-in-love Zoe’s troubles did not stop there however. Monomachus brought his long-standing mistress Maria Skleraina to court and insisted that he be allowed to publicly share his life with her, and that she obtain some official recognition. Poor loveless Zoe, who was then sixty four years of age, was forced to share her bed and her throne with the perfidious Skleraina, who mistreated her and may have been plotting to kill her, if it was not for the Constantinopolitan mob, which rioted, threatening to dethrone Monomachus if he did not protect Zoe, the source of his power.

If Zoe was guilty of anything, it was of being stunningly beautiful, with Michael Psellos in his Chronographia commenting appraisingly that: “every part of her was firm and in good condition”. Having been isolated for so long, Zoe realized that she could employ her beauty as a political tool. In order to protect her most important asset, she became a ground breaking cosmeticist, far eclipsing the paltry efforts of Garnier and Estee Lauder, developing a variety of creams and treatments in the gynaeceum, and carrying out experiments in her own laboratory. Psellus reports that as a result, her face looked youthful, her pores clear, her skin pert, with minimal signs of ageing, well into her sixties.

The Empress Zoe depicted on the walls of Saint Sophia was not a prostitute. She was not even a very naughty girl. Instead, she was a dynamic ruler, a diplomat, an entrepreneur, and what in modern parlance would be termed, a cougar. And all she wanted was to be loved, valued and respected. According to today’s standards, her ingenuity, her refusal to “know her place,” her perseverance in the face of adversity and her immense and multifaceted skills constitute her a feminist icon. Quite possibly, it is this assertion of female potency that Professor (P)sofuoğlu finds so confronting that it compels him to require her urgent exmuration from the walls of Agia Sophia.

A word to the wise, however: You don’t mess with the Byzantine sisterhood. And if, despite having being warned, you do, watch your back next time you take a shower.

A very disturbing tweet from a Turkish history prof. demands the complete removal of icons from #HagiaSophia, calling Empress Zoe a 'prostitute'; says "If you don't remove these icons from Hagia Sophia, this will be the first mosque in the world displaying a prostitute." https://t.co/Xe7LPSiUnT