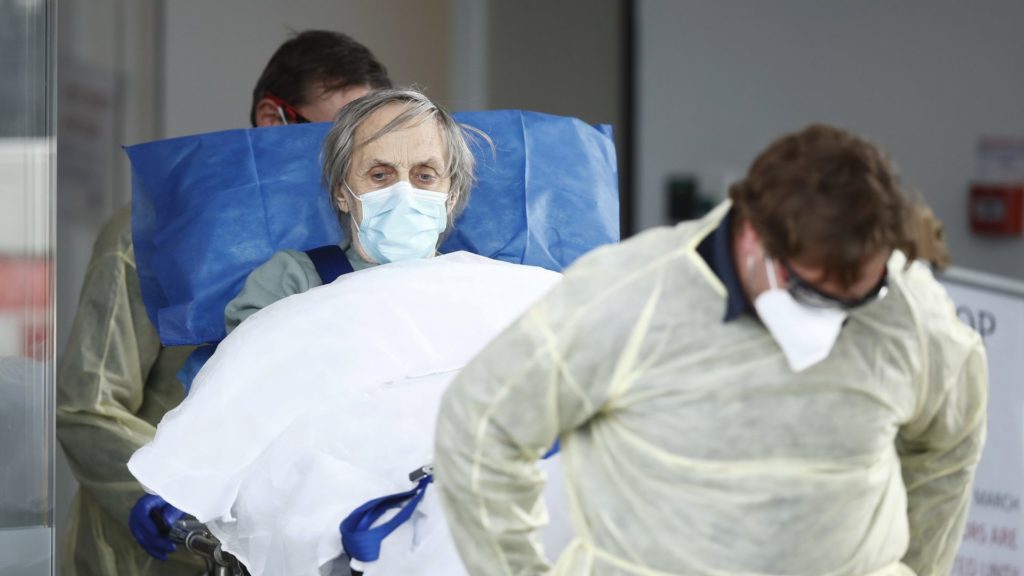 A resident is taken away in an ambulance. Photo: AAP

The same people who experienced wars and turbulence are now the major victims of the battle against COVID-19.

There are 763 active cases of COVID-19 in staff and residents across 80 aged care services in Melbourne, with 11 deaths recorded at St Basil’s on Wednesday evening and more expected as the crisis unfolds.

Victorians await the tally every day. At Tuesday morning’s press conference Victoria’s Greek Australian Health Minister Jenny Mikakos, usually a tower of strength, held back tears as she announced another six deaths, and ten the day before.

“What has happened at St Basil’s and what is happening in other nursing homes is just awful for the residents, their families and the staff,” she told Neos Kosmos.

“I feel heartbroken for the families who have lost their beloved mother, father or grandparent. I send them my heartfelt condolences. I think all our community shares their pain and grief. When I heard how bad things were late last week, I asked my department to ensure whoever could be safely moved out of the facility was urgently transferred to hospital. Most residents have been moved to a hospital. I know this is difficult but residents have been moved so these elderly people get the care they deserve.”

The growing number of positive tests across aged care facilities have resulted in an unprecedented staffing crisis to an already problematic sector and relatives of residents are concerned about the emotional support they are getting during the last moments of their lives.

“The situation at St Basil’s Home for the Aged in Fawkner, Victoria, has been very challenging for everyone involved,” Aged Care Quality and Safety Commissioner Janet Anderson told Neos Kosmos.

“Residents and their families have had a distressing experience which must be fully recognised. The service continues to be supported by the Victorian Aged Care Response Centre which includes representatives from the Commonwealth Department of health, the Victorian Department of Health and Human Services, and the Commission, among others.

“Since first learning of the outbreak at St Basil’s, the Commission has actively engaged with those in charge of this residential service. Working alongside other agencies, we have been focused on monitoring and supporting the provider’s efforts both to manage the outbreak and to respond to residents and relatives’ concerns. In light of information received from a range of sources about the provider’s response to the outbreak, the Commission has taken regulatory action to require the provider to appoint an independent adviser to the St basil’s facility and to suspend admission of new residents until the Commission is satisfied that the provider is delivering care in accordance with the Quality standards.”

Australian Medical Association President Dr Tony Bartone told the ABC “several hundreds of nurses” were transported to Victoria from interstate to bolster numbers but in reference to facilities such as St Basil’s, where the whole staff and management have been temporarily replaced, he was concerned about the support being given. “Regardless of the capability and how exceptionally trained they are, they don’t know the residents,” he said. “The residents don’t have a name tag. They need to identify who’s who, look at their charts, rapidly acquaint themselves with their relevant history and details and clinical care needs and then coordinate that. They’re not aware of what is where in the facility because they have just come in cold. So enormous, enormous emergency response challenges at a particular facility and unfortunately we’re seeing that in a number of other facilities as we speak and so that’s the challenge.”

Since the staff has been replaced, information to relatives has been limited and Australia’s Federal government has been accused of sending junior nurses to the facility to fight the virus with disastrous results.

Christine Golding found out her mother Efraxia, 84, was moved to Peninsula Private Hospital in Frankston only after receiving a call from the hospital. Nikolas Barbarousas told Neos Kosmos that his father Apostolos, 70, was “fighting for his life in hospital” whereas he received a phone call from the nursing home telling him that he was in his room.

Australia’s Aged Care Minister Richard Colbeck said on Wednesday morning that he would take the lead in communicating with families.

“Today, I’m advised that there will be outward calls to all of those family contacts in the Epping Gardens facility. That has already been done in relation to St Basil’s and that is the practice that has been put in place,” he said.

“There is also a system that has been put in place where Services Australia is supporting the communication to families, working with the nurses and others in the facility who are providing those details to Services Australia so they can be communicated directly to families. It is our endeavour to contact families as often as possible to ensure they have the information of what is occurring with their loved ones.”