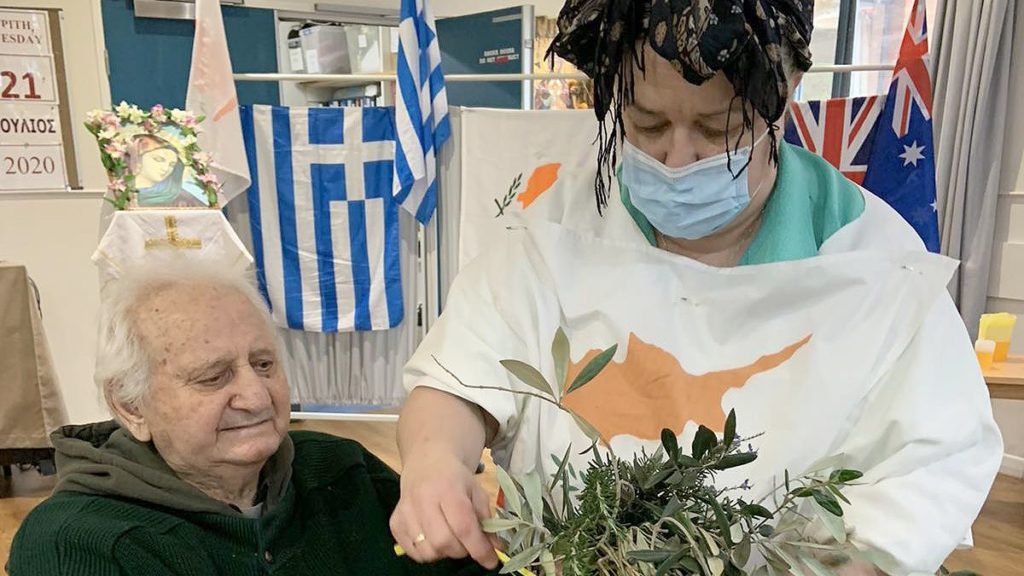 A recent picture of a Lifestyle and Activity Team member interacts with a resident of a Fronditha residential center. Photo: Supplied

This week an aged care workforce shortfall of 30 percent was announced amid moves by government to bring to Victoria aged care workers from other parts of the country including the Armed Forces to ensure the aged were looked after. The medical profession and aged care specialists have warned since the beginning of the month that a staffing crisis in the sector was looming.

The Aged and Community Services Australia (ACSA) chief executive Patricia Sparrow told the ABC that aged care service providers were faced with a growing number of workers who were forced to stay away because they were self-isolating, waiting for COVID-19 test results or who were “plain scared” of the situation.

Victoria Premier Daniel Andrews announced on Wednesday that hospital nurses in the state had filled in up to 400 shifts in short-staffed aged care facilities. He praised the role of the health professionals in their “massive effort” to meet the shortfall in the sector.

On Thursday, the premier announced the grim news that the state’s death toll had risen to 105 after 13 deaths were reported over the previous 24 hours. Ten of those deaths were aged care residents and Mr Andrews said that of the state total of 5,885 active cases, 913 were active cases in aged care facilities.

A Victorian government spokesperson told Neos Kosmos that state and federal government were working together through the Victorian Aged Care Response Centre, which has been established to co-ordinate and expand resources to respond to outbreaks in residential aged care homes.

“The centre will bring together Commonwealth and State government agencies at the State Control Centre in Melbourne in a co-ordinated effort to manage the impact of the pandemic. There are plans in place with the sector and unions to consolidate shifts at single sites, to reduce the number of work locations for staff,” the spokesperson said.

The spokesperson said that the state government was providing financial assistance so workers without sick leave or special pandemic leave and no income did not feel compelled to go to work even if they did not feel well.

“There is a $1,500 payment available and a $300 support payment from the time of testing. Federal funding is also being provided to ensure aged care employers can work at a single site, and workers won’t be financially disadvantaged” said the spokesperson.

The President of the Australian Medical Association, Dr Tony Bartone told the ABC on Wednesday that “several hundred nurses” had been brought into Victoria from other states to bolster the staff numbers in residential aged care homes.

Victoria has 465 residential aged care facilities of which (at the time of writing) 77 have been affected by COVID-19.

Australia’s Chief Medical Officer Professor Brendan Murphy told the Guardian that most of the 77 affected facilities in Victoria “only had one or two small cases of the virus and that these had received a swift response from authorities.

“In others, they have been substantial and bigger outbreaks. We have 13 facilities that we are keeping a very close eye on at the moment. Many with more than 20 cases. We now have across all of aged care, including homecare, more than 400 residents who are now COVID positive. That is still a relatively small proportion of the cases in Victoria but it is probably the highest concern group of people that are infected with this virus,” Prof Murphy is reported to have said.

Fronditha Care went into a “high state of vigilance” this week  after a staff member of its residential aged care facility in St Albans (THALPORI) tested positive to COVID-19.

The organisation, which has four facilities in the Melbourne area, said that there were no staff shortfalls within the organisation. The plans it had set in place at the start of the pandemic meant that it could draw on its own staff members to build a Surge Workforce as an “added precaution to cover staffing requirements in the event of a COVID-19 outbreak” at any of its facilities.

“Currently our preparedness plan allows for a surge workforce within the organisation as well as resources we have on standby through our agency partners,” said Zoe Angeli Fronditha’s Communications and Public Affairs general manager.

The costs of standing staff down were high but the organisation would be able to claim these costs from government at a later stage, Ms Angeli told Neos Kosmos.

“Staff members who are stood down do so on full pay for up to 14 days or until they receive their results.

“If they’re found to be negative, they either return to work immediately or, if they’re still unwell (maybe with ‘flu or another situation), they must obtain a medical certificate and remain home until they’re cleared by their doctor,” said Ms Angeli.

Infection control policies and procedures have been tightened and these, she said, included “increased cleaning hours and the use of Personal Protective Equipment (PPE), such as masks when providing services in the residential facility and home care setting.”

The chairman of the Ethnic Communities Council of Victoria (ECCV) Chairperson Eddie Micallef told Neos Kosmos the that a directive by the Victorian and Commonwealth governments to reduce the number of workplaces where part-time and casual aged care workers could work at as well as the requirement for staff at facilities where there had been a COVID-19 cases to self-isolate for 14 days had put significant pressure on service providers to meet the needs of older people in resident care or who were receiving home support.

“Our understanding is that there is close collaboration occurring between the Victorian and Commonwealth Government and between aged care providers to share expertise and resources to meet current capacity issues. This includes bringing in qualified aged care and health care professionals from other States and Territories,” said Mr Micallef.

He said that while additional measures to increase hygiene and infection control were placing pressure on the staff and management of aged care facilities, these measures were “essential and not negotiable”.

“The casualisation of the aged care workforce is something that has been highlighted as a result of this crisis, and future planning/resourcing for the aged care sector should look to address this, placing more value on the skills, capacity and contribution that aged care workers make in caring for older members of our community, said Mr Micallef.