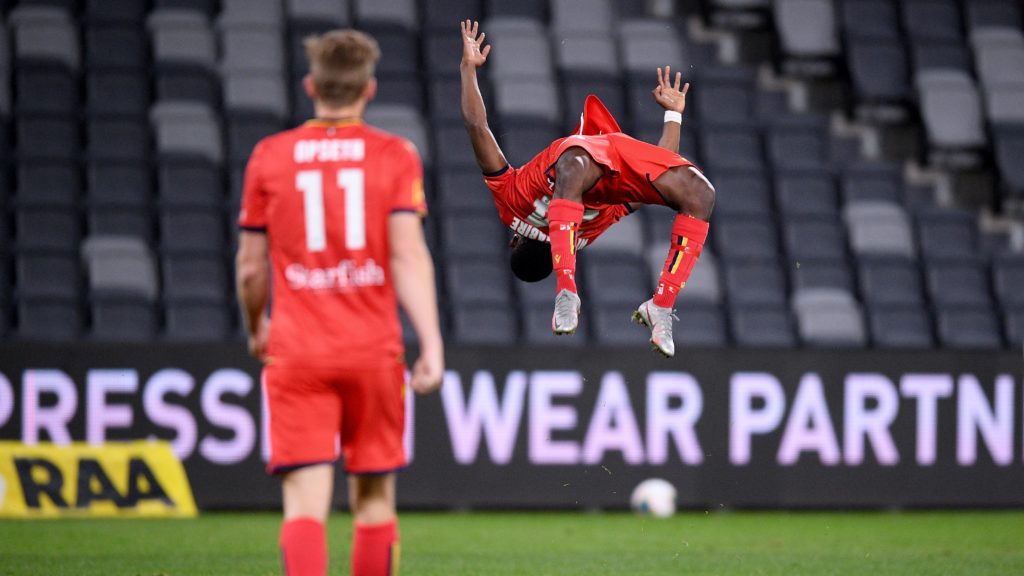 Adelaide United were quick to pull the rug from under Perth Glory during Thursday night’s match, getting through four goals in the first half.

Adelaide were able to clinch onto sixth spot on the ladder equal with Perth on 34 points and four points clear of seventh-placed Western United, who have played three games less.

Adelaide took advantage of Perth’s unusually clumsy defence this game, allowing them to score their first two goals within two minutes of one another.

Alternatively Adelaide interim coach Carl Veart has been working his magic with the team, winning seven points out of nine since the competition restarted.

Mr Veart was previously assistant coach before taking over from Gertjan Verbeek who returned to the Netherlands in April.

“After the COVID break we came back and I really emphasised to the players that I want them to enjoy their football,” he said.

“It’s about them enjoying and expressing themselves and I think we saw that tonight with some of the football they played was great.”

Michael Jakobsen, Lachlan Brook, Kristian Opseth and Ben Halloran each scored a goal in an impressive first half, which also included a missed penalty from midfielder Riley McGree.

Glory’s first goal was thanks to Kristian Popovic in the 33rd minute.

The Red’s hype carried on in the second half as Pacifique Niyongabire scored his maiden A-League goal in just his second appearance.

Glory’s attempts to push pack came late with two goals made by Bruno Fornaroli and Juande, perhaps in some way softening the blow of the final score.

On Wednesday Brisbane Roar were able to enhance their fourth spot score after beating out a resilient Melbourne Victory 2-1.

After a no goal first half, Roar’s Scott McDonald and Matthew Ridenton gave the team 2-0 lead.

This gave Brisbane just enough wiggle room to pull through after Andrew Nabbout scored a late goal in the 86th minute for Victory.

This Saturday will see Sydney FC take on Melbourne City at ANZ Stadium.

On Sunday the Newcastle Jets will be up against Western United FC, followed by Melbourne Victory and the Central Coast Mariners battling it out on Monday.