St Basil’s death toll rises to 19, amid reports of residents in dire conditions

Medical staff handling the hospital transfer found residents dehydrated, malnourished and some “hours from death”, according to a Herald Sun report 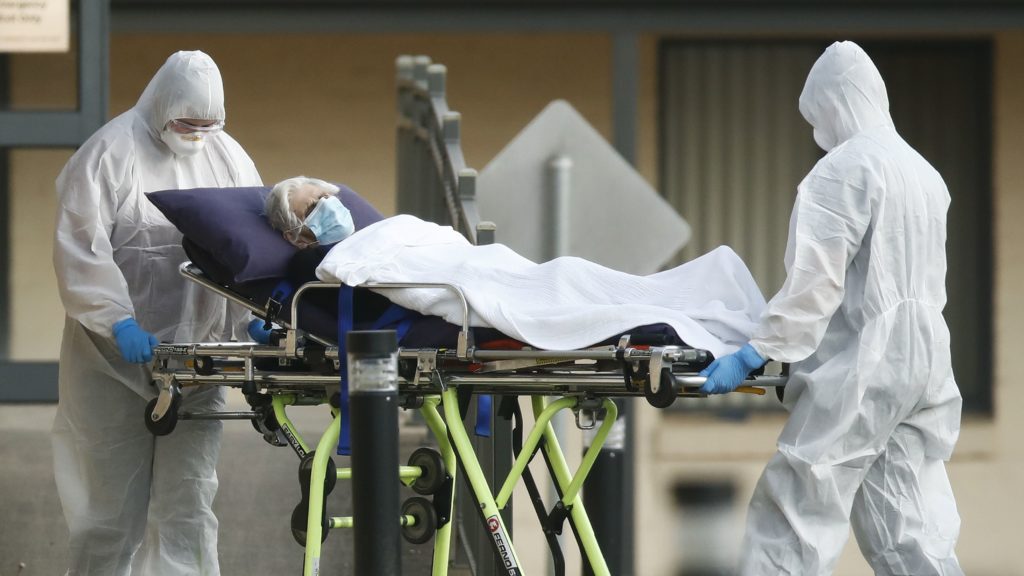 A resident is removed from St Basil’s Homes for the Aged in Fawkner, Melbourne, Friday, 31 July. Photo: AAP/Daniel Pockett.

Coronavirus-related deaths linked to St Basil’s Homes for the Aged in Fawkner, Melbourne, have reached 19 as per the latest update accounting for four more people passing.

A woman in her 70s passed on Friday, following by two more losses on Saturday – a man in his 80s and a woman in her 90s. According to information provided to Neos Kosmos, the death of another woman in her 90s was confirmed today, Sunday.

The news come following alarming details that emerged describing the state St Basil’s elderly were found in on Friday, 31 July.

A mandatory transfer for hospitalisation of all remaining residents took place on the day.

Authorities ordered for the 32 elderly still staying in the Fawkner facilities at the time, to be moved to private hospitals.

But an evacuation report obtained by Herald Sun, as revealed on Saturday from the publication, states among other details, that residents had not eaten or had anything to drink for days, some were found soiled or with neglected heath conditions, including two diabetic residents, while most were non-verbal or even in a comatose condition.

ALSO READ: St Basil’s aged care residents transferred to hospital, but not all relatives are happy

Medical staff tasked with the transfer are said to have expressed concerns that a number of patients in need of extensive care had received inadequate care “for quite some time”, and they would have died if the intervention had delayed another 24-48 hours.

St Basil’s Chairman says authorities were warned that care could be jeopardised
Interviewed by The Age and The Sydney Morning Herald, St Basil’s Chairman of the Board in Victoria, Kon Kontis spoke of warnings he had given to health authorities about an unavoidable disaster waiting to happen due to the mandatory quarantine direction for all the nursing home’s staff that had worked for the last two weeks before 21 July.

Replacement staff were deployed by Federal authorities who assumed temporary management of the nursing home, but Mr Kontis claims the move was hasty and its execution flawed.

“They made mistakes because they were unprepared,” Mr Kontis said of the replacement staff adding he had warned authorities of negative impacts for the residents’ care and well-being.

“I told them we have got no confidence in the people you will bring in. Can you imagine bringing in people who have never been there before to do an afternoon or a night shift to look after people? There must have been another solution to be found.”

ALSO READ: St Basil’s in Adelaide is not like its Victorian counterpart

Health officials defend intervention
But Victoria’s Chief Health Officer, Brett Sutton addressed the comments citing his communication to St Basil’s management that their entire workforce were considered close contacts, stating he has “absolutely no regrets about writing to St Basil’s about changing that workforce.”

“Without the intervention … that’s just more and more residents exposed and infected and dying[…],” Dr Sutton said adding that he was not involved in the day-to-day communication about the implementation of the transition and the staffing swap.

Meanwhile, sources from the Victorian Department of Health and Human Services, told Neos Kosmos that St Basil’s management were notified about plans of an imminent intervention, almost a week before it took place.

But they were reportedly met with resistance resulting in the issuing of the mandatory ‘stay at home’ order for the nursing home’s staff by health authorities.

When quizzed about the decision to send St Basil’s staff and management home, the state’s Premier Daniel Andrews also firmly defended the move, as the only available choice under the circumstances of the outbreak.

“The alternative would be to have them working and infect every single person in the place. You can’t do that,” Mr Andrews said.

“Deficiencies of care” observed at St Basil’s, said Dr Brendan Murphy – Australia’s Chief Medical Officer until recently – could be attributed to the short notice given to service providers brought in by the Commonwealth, to mobilise experienced staff in sufficient numbers, considering also the current shortage of workers available in a sector where a big part of the workforce is either infected by the virus or self-isolating.

“Given the events of the last few days we have spent a lot of time with the Victorian department of health working out ways to ensure that these sort of staffing shortages don’t ever happen again,” Dr Murphy said.

“We have now got a very strong agreement that priority will be given to meeting the staffing needs of every residential aged care facility with public hospital staff.

“We have a guarantee now that this will happen and we will make sure that at no stage do we get a staffing situation which leads to those significant deficiencies in care.”